Share All sharing options for: The Goran Dragic 2009-10 Report Card

Today, we begin a series of Suns player evaluations. We're going back to school using the old A-F grading system, weighing numbers, opinions, and all that cannot be captured in a statistic -- the value each player added to the Suns improbable run to the 2010 Western Conference Finals. 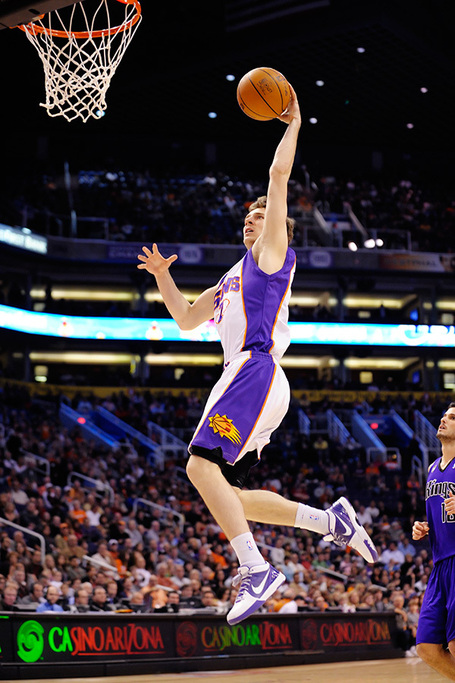 Entering the 2009-10 season, the Phoenix Suns faced many, many, many question marks. To name a few:

And another vital question mark, related to one Goran Dragic.

What could the Slovenian Sniper contribute to the Suns? The simple concern among many of us was that if he couldn't back up Steve Nash somewhat effectively, then, well, there would be bad trouble in the desert. And what options would the Suns be left with? No way could Kevin Johnson once again return for a comeback (sarc). Would the Suns move LB over to the point? Had Smush Parker retired? What were Earl Boykins' contract demands like?

No, not viable long term options when faced with 82 games of basketball warfare ahead.

Not only was Goran Dragic's performance linked to potential Suns wins and losses, but it was also linked to Steve Kerr and the Front Office's tenure. The trading for, negotiating, and money spent in getting Goran out of his Euro contract in 2008 was a huge risk, but one which the front office was willing to take.

Fan and expert opinions were all over the map, but what we learned from the Dragon this season was that he would control his own destiny. He would be given the chance to prove he belonged in the NBA as Steve Nash's backup. Over and over before this season we heard him and others talk about confidence, how playing with it was vital to the youngster's success, how Dragic fed off of the support of his teammates, coaching staff and front office .

While Terry Porter kept Dragic on a short leash and most likely set his development back a year or two, Alvin Gentry showed both confidence and patience in the young Slovenian. He was given time on the court, along with the encouragement to play through mistakes -- positive reinforcement if you will -- instead of "do it right or sit."

PHX Seth did a concise piece on Goran, complete with season highlights, so I needn't take you back there. Instead, here are some numbers to sink your teeth into:

Key:
Per-rating of a player's per minute productivity
eFG%-effective FG%, adjusting for 3pt FG worth more than a 2.
TS%-true shooting percentage, taking into account 2 point FG's, 3's and FT's

So Goran Dragic ... While the numbers aren't jumping out at us so much, I'm going to step out on the limb and say that I don't much care about them now. Goran needs to shoot higher than 73% from the charity stripe, but he'll figure it out. His 45% from the field lumps him with fellow guards like Ramon Sessions, Arron Afflalo and Thabo Sefolosha (among similar attempt totals).

Among WC sophomores, Goran ranked second in efficiency per 48 minutes along with assists per game. My favorite stat, in comparison to other WC sophomores: Goran made more field goals in only 8 more attempts (222-491) than Jerryd Bayless (200-483) ... HA HA, Jerryd! And finally, of the 13 WC sophomores, only Russell Westbrook and O.J. Mayo played more games than Dragic (82-80).

This season, Goran proved he can hit from beyond the arc at a very respectable 39%. He proved he could dish, he proved he could break some ankles and finish. He proved he could defend -- not All-NBA just yet, but the improvement is there. But the most important thing about Goran Dragic is his mind. He is a coach's dream. He is humble yet determined. He works his ass off, he does what he's told, there is no ego, only a desire to improve. And once he can consistently make his teammates better -- getting them the ball where they can produce -- coupled with more playing time, you're looking at an All-Star. I said it. Goran Dragic = future All-Star.

It is not to say that Goran is the finished product, that he was great all season -- he, like everyone else, had his forgettable moments -- but overall, Goran was solid virtually all season. He spelled Nash and showed excellent poise during crunch time this postseason. Nothing spells I can play better than dropping 23 points in the 4th quarter in Game 3 of the Western Conference Semifinals. In San Antonio.

This season, Goran became dependable, played with confidence, consistent energy, and often led the second unit to some impressive comebacks with his relentless play -- he never gave up on a loose ball and he never sulked when his shot wasn't falling. Goran is a gamer. The scary thing about the Slovenian Sniper is this: he's only going to get better. Playing behind Steve Nash will tend to have that effect on you. His desire and determination will propel him. An organization's support and confidence will also help the youngster a whole lot, too. Once his basketball IQ increases with experience (and it will), and once his defensive acumen catches up with his offensive game (he's getting there), this kid will be a complete player, and heir to the Steve Nash throne.