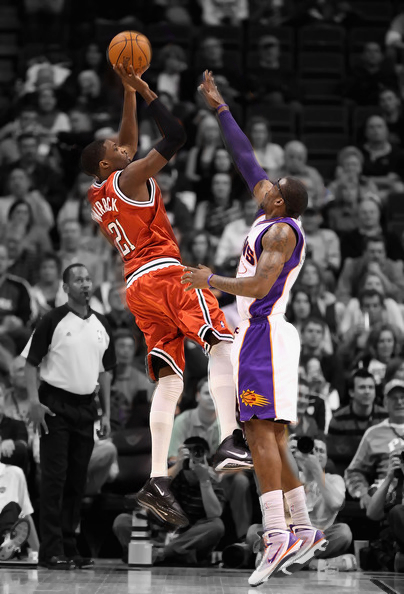 It kind of seems to me that with the loss of Amare, the trade of Barbosa and the acquisitions of Josh Childress and Hedo Turkaglu our boy 'Hak' has kind of been... how you say - maybe under-appreciated by some fans IMO.

Some people don't mention him when they talk about how they're excited 'bout next season - some people really want to trade him for... something I guess. And so for those peeps and everyone else who just might not be that familiar with the 'Helicopter' let me give you the 'Skinny' (another nick-name) on our boy H-Dubb.

I'm not going to get too crazy numbers-wise in analyzing the past with this guy, Seth had a good quick post about them here. - this will be a lot of general information - some cool videos and sweet pictures but maybe you'll decide to give the guy a chance before you decide to ship him to Charlotte to try and get Boris Diaw back.

I will say this, I do think he has played on some bad teams and/or hasn't been used as efficiently as he could be. But I look at it like this - Warrick is in reality, a replacement for Lou. And though somewhere in my wild imagination Lou and his flowing locks are basically irreplaceable, Hakim is a very exciting and acceptable replacement. You get that?

Yeah yeah yeah - so he's not very good defensively because he's pretty lean - but he is long and explosive. And I heard a juicy rumor that we might use the 'girly-zone' more often like an actual scheme this year instead of a last ditch effort to stop teams. If that's the case - Warrick was meant to play defense that way, that's all he played his 4 years at Syracuse, his quickness and reach allow him to close out or provide dangerous weak-side help. IMO.

But I said we wouldn't get too much into that...

SO born and raised in Philadelphia, Pennsylvania - he's bounced around a few NBA teams (The Grizzlies, Bucks and the Bulls) as a contributor from the bench - bla bla bla lets check out his College days.

HAK WAS MEANT TO BE ORANGE

If you didn't know - Hakim Warrick was a four year player at Syracuse, where he earned his degree in Retail Management and Consumer Studies. 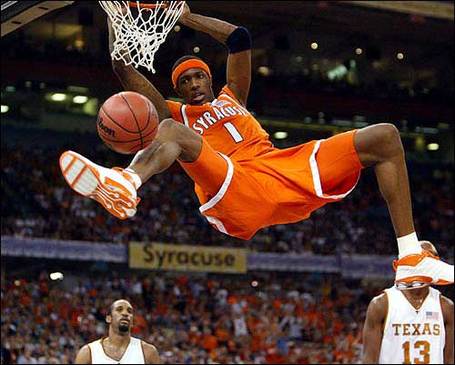 He looks good in Orange right? (You were looking at the orange and not his crotch right? You sick freak... stop looking) But anyways - while at Syracuse he accomplished just about everything a college basketball player could ever want to accomplish, won a National Title - played with superstars - won the Big East tourney, made some timeless highlights, played ALL 4 YEARS, and had the opportunity to match-up against the most athletic hands in the universe... peep this old article I scrounged up exploiting my access to ASU's online Library connections! 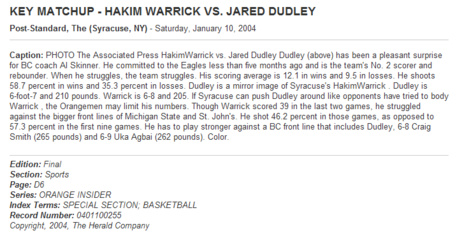 The great thing about Hakim's college career is that every year he improved and it was because he had a strong defined role on his team - I think that's something he can count on here in phoenix...

Now check some of his Syracuse highlights:

After watching that - can you see how valuable he might be running the floor with Goran or Nash always looking up? He can flat out finish - he was projected to be a lottery pick early on in the 05' Draft, but teams were concerned that the only thing he could do was finish, so he fell to 19th. But here in Phoenix - much like Lou he will be expected to finish and that will be his role. Lou couldn't always finish - either because his hands were too small or because his hands were too goofy at times - Warrick can finish period.

I do wonder about the energy - I hope he can emulate or at least prove a comparable substitute to Lou's hustle and grit, that is something that might be sorely missed. But I have a keen feeling that Warrick's explosiveness and length will provide a special kind of energy and style to the second unit that we haven't seen quite yet. Between Warrick, Chidlress, Dragic, and even Frye at times (and hopefully Frye more often) we have a bench that knows how to get to the rim, and in my estimation that is always a good thing.

I won't discount Warrick's mid-range either, it is definitely something he has improved on since joining the NBA - and with the Suns I have no doubt they will be asking him to continue to work on it and maybe even try to extend it if possible. But first and foremost - I want and expect to see Hak jamming the ball every time with authority.

Now let's take a look at some of his NBA highlights:

Let me put it this way - Warrick has never played on a good NBA team. With the Grizzlies he had decent numbers as a back-up, but with O.J. Mayo and Rudy Gay and Mike Conley, etc. there weren't too many 'pass-first' kind of guys. Warrick needs a pass first kind of guy even though he can hold his own in face-ups or in the open court. He would thrive in an environment where he was constantly being fed - with the Bucks he got a lot of lovin' from Jennings, but again was traded mid-season and the same story with the Bulls he never really got a chance to mesh with his new teams.

He is now on a 'pass-first' kind of team. One that will feed him until he explodes. I believe he is the perfect type of player for the Suns style of basketball, and I've always thought so. That means I'm smarter than you because the Suns (Alvin Gentry) wanted him too because they felt the same way. Alvin has repeatedly praised Sarver for going out and getting the players that he (A.G.) said he wanted. I got him. We got him... err they got him and now we just have to wait and see what kind of surprises are in store for Planet Orange.

I am extremely excited to see what kind of chemistry this team can cultivate and how that can translate with this deep group we have.

And may there be many more tea-bags to come... 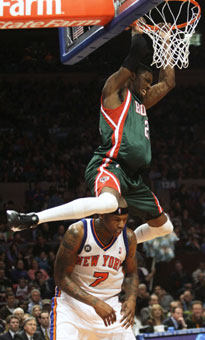 What are your thoughts on HAK?

Do you think he'll be a good replacement for Lou?

If you don't like him as a player for the Suns... at least give his Twitter account a chance - he's one of the more entertaining ball players I've seen. Here are a few good ones.

Apparently he loves to play PS3 games online - ALL THE TIME. 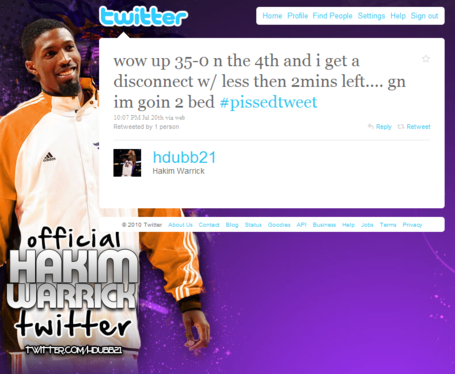 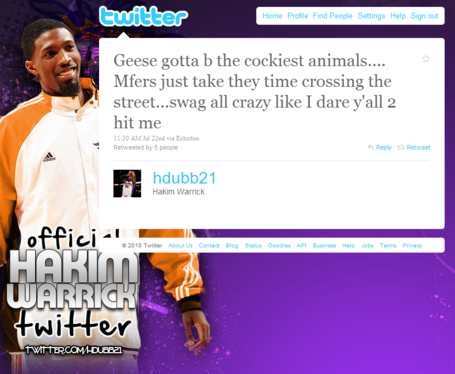 Who is the player you are the most excited about seeing play this next year?