Share All sharing options for: The Phoenix Suns Look to Play Defense for a Second Time this Year Against the Sacramento Kings

2011 eh?  So let's start over.  The calendar says so.  Besides that, we've had a lot of excuses so far as to why our 2010 Western Conference Finals-worthy team is only 14-17 after 31 games this season.  We lost Amare Stoudemire, we lost Lou Amundson, Robin Lopez got injured, we had a ton of new guys learning our system to start the year... then we traded Jason Richardson... and then we had more new guys that needed to fit in - and I'm already tired of just remembering all these excuses.  So let's just start over. There is plenty of time left in the season to right the ship - win games, peak our team performance and make a playoff run.

You could say (and I will) that the Suns were thinking exactly along those lines judging by the way they finished 2010.  They punked the Detroit Pistons with actual defense and much anticipated bench production AND broke a 4 game losing streak with a 92-75 win. The Suns as a franchise are now 62-0 when they hold an opponent below 80 points... I'm just sayin', more "D" please.  Read more about that game here and here. Do it.

Now the Suns are in Sacramento to face the Kings and Tyreke Evans and start 2011 off the right way.  With a "W".  But still there are questions: Who will Gentry start since Sacramento is a bigger team than Detroit?  Why are Warrick and Childress not playing?  How are the new additions fitting in so far?   What does Vince Carter eat on the team plane?  I will have the amazing answers to all of those questions - all you have to do is JUMP IT FOOLS!

So Eutychus, who will Alvin Gentry start since the Kings are a bigger and better team than the Pistons - certainly we can't have Pietrus at the PF?

Per Paul Coro, again Alvin Gentry and the Suns will start Pietrus at the PF.  If something works - why fix it.... Then again it might have something to do with the small line-up the Kings have been using lately.

Bam.  You got Questions?  I've got answers.

Okay, but Eutychus - can you tell me why exactly Hakim Warrick and Josh Childress aren't playing?

I'm glad you asked, because I was bringing in the new year on Twitter and my good friend Paul Coro again came through big with some intel.

Warrick - as has been obvious to most readers, is having a tough time keeping his energy high on the defensive end of things.  Maybe in practice as well but I can't say with certainty because I don't know.  We all know he can keep the energy on offense, but that's not hard when you're spoon fed like an infant a la Steve Nash.

Grant HIll?  You mean, the guy who's about to appear in his 900th career game tonight in Sacramento? The guy who is currently 1 of only 5 NBA players in history to average 14 or more points at the age of 38 or older, joining the likes of Kareem, MJ, Karl Malone, Reggie Miller and Robert Parrish?  The man who is undoubtedly as much the heart and soul of this team as Steve Nash is?  The dude that without question will guard anyone in the league AND do a good job at it?  I don't think so.

Okay, how about Jared Dudley?  You mean, the guy who's been basically the team's leading scorer off the bench since Jason Richardson left?  He's had 7 scoring games of 19 or more points his entire career, THREE IN THE LAST 11 DAYS.  The same Dudley who's found his World's Most Athletic Hands from 2009-10 again?  I don't think so - "MAN ON FIRE" [slurping Scott Williams voice]

Equally - Vince Carter and Mickael Pietrus are playing very well, and like Coro mentions - Alvin said he would be shortening the rotations.   Does that mean Warrick and Childress will be logging Earl Clark bench time?  HECK NO. Again like Gentry has said,  a lot will depend on which teams we are playing and who's style fits better.  For example - I am expecting to see Hakim Warrick play some quality minutes against the Kings - for one, because the last time we played the Kings Hak went off for 18 in minimal minutes and had a field day flying high above the likes of Landry, Greene and Casspi. Also, the last time Hakim played - he really did show some improved effort on the defensive end IMO.

Wow Eutychus, great answers... But I'm still wondering how our new additions are fitting in after a week and a half of 'gel-time'?

That's a wonderful question with a wonderful answer.  Wonderful.  The new additions are pretty much fitting right in exactly as we had planned.  :)  Vince Carter has scored 18 or more in both of his games as a member of the Suns and indeed is providing some of the offense we were missing after losing Jason Richardson.  Pietrus has scored 10 points or more in the last 3 games and his defense is very much a noticeable improvement on the perimeter and chasing shooters on rotations.  Gortat, despite being posterized and abused by Blake Griffin has also shown great defensive ability and agility as well as posting 2 double-digit scoring efforts in 4 games as a Sun (he had only 2 of those in 23 games as a member of the Magic)

Alright Euty, you think you know everything huh?  Well I bet you can't tell me what Vince Carter snacks on during poker games on the team plane?  Heh?  Try that one on for size tough guy!

Too easy.  The fool eats Mrs. Fields cookies and enjoys them with a tall glass of 2% Milk. 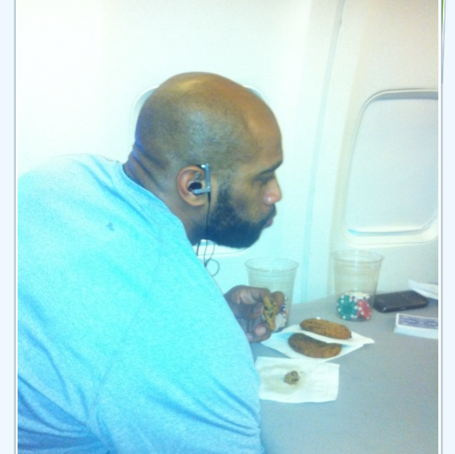 So maybe the real question is this.  Is Vince Carter all talk?  Because I remember without a doubt that during his press conference he said he was going to find out what Grant Hill was doing and do the same.  Well guess what Vince?  Grant Hill doesn't eat cookies.  And Grant Hill would be very disappointed.  We'll keep close tabs on this new developing cookie drama.

FINE.  You DO know everything.  Well, tell me who's going to win tonight - the Kings or the Suns?

Tricky Tricky. I say the team who plays the better defense and scores the most points. Will Hill defend Tyreke Evans again or can Vince hold his own against the young buck?  Either way I'm excited to see that Grant has some defensive help from both Pietrus and Carter.  Will Landry have his usual way with the Suns (which is almost always a double-double with 7654 frustrating offensive rebounds) now that we can have Lopez or Gortat guarding the rim and pulling down rebounds all game long?  We'll see.

Also - keep an eye on DeMarcus Cousins.  The rookie has shown some great promise... but also he's shown some explosive character issues.  It could always get interesting with his temper.  You never know - Grant Hill has been getting under some skin lately with his awesomeness, it's (his awesomeness) just been so big and bumping into everyone lately.

Anyways - here's to another Suns win and continued improvement. Remember - it's still going to take some time. Just like your New Years resolution to lose 20 pounds - it all won't happen at once.  Happy New Years guys!