That's what you get from a team with 1 star and 12 fairly interchangeable rotation players. The only constant scoring threat, game in and game out, in the Phoenix Suns' lineup is PG Steve Nash. Everyone else is a wildcard.

Fairly talented wildcards, but wildcards nonetheless. Now that Gentry has settled into a 9-man rotation for the time being, he only has to read the tarot cards on 8 of them. Which ones will produce points tonight? Which ones won't?

Of the 8 guys in the rotation not named Steve Nash, only 1 of them can be counted on for a consistent point production. And on a team that can't play defense, a team that NEEDS 100+ points a night to compete, that's kinda scary.

Over the past 10 games, just one guy has delivered no fewer than 13 points in a game. For a coach that's probably getting ulcers trying to predict who will deliver each night, there's only one guy on this team non-Nash that he can count on.

Take a deep breath. In. Count 5 seconds. Breathe Out.

That one guy is Vince Carter. Only Carter has delivered a predictable number of points each game. In his last 10 games with the Suns, his low water mark is 13 points with a high-water the other day of 29. And you wonder why Gentry gives this guy consistent minutes?

Look, I dislike the Carter persona too. He's got a tendency to be too lackadaisical. He can irritatingly joke around with players on the other team while they are blowing the doors off his own team.

But he scores. And when you know your team HAS to score 100+ points to win, that's a necessary evil. You play Vince Carter. Period.

The next most consistent point-producing non-Nash, non-Carter player? Jared Dudley. His low water mark is 7 points, with a high of 21. Not exactly punch-card material, but every other player in the rotation has laid at least 1 egg in the past 10 games. Dragic, Gortat and Warrick have at least 1 goose egg. Frye, Hill and Lopez have hardly been better, with at least one 2-point dog. And this is only in the past 10 games.

On the high end of the spectrum, every player except Warrick has scored at least 15 points in one of these last 10 games.

Imagine being Gentry right now. What am I gonna get tonight? And from whom? You can't count on season averages from these guys. Heck, you can't even count on their averages for the last 10 games. 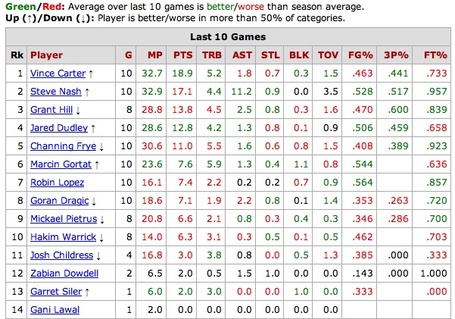 Jared Dudley has averaged 12.8 points the last 10 games, with a low of 7 and a high of 21. Channing Frye gives you "11 a game" for the past 10 games, but only 3 of the past 10 games has he delivered a point total within 1 point of that average. Gortat, Lopez and Dragic are like rolling dice. No idea what's going to come out. Each has provided 15+ points in a game as well as a dog.

Oh, and save yourself one more ulcer (at least during the game). Keep playing those old guys Nash and Carter their 30+ minutes apiece.