Both teams flew in late after their games last night - and both teams definitely looked sluggish and tired out on the court.   At the first half the score was 38-36 Suns, the lowest combined scoring half of the season.  It was Ugly with a capital U, and to spoiled Phoenix Suns fans who only know run & gun - it was like Brittany Spears shaving her head kind of ugly.  Channing Frye, Vince Carter and Grant Hill combined for 3-18 from the field and 9 bad turnovers for 16 Piston points really didn't help the Suns offensively.. but on the Bright Side the Suns played great defense.

I'll give credit as well to the Pistons defensively - they've got long guys and Ben Wallace who can still get the job done on that end if they are engaged in the game (and that's some of the Piston's problems right there).  They were trapping Steve up top high before the pick and roll could gain motion and this disrupted our offense pretty good and forced Steve to turn the ball over.

Another bright spot in the first half was the play of the bench.   Goran Dragic continues to maintain his aggresiveness as he ran the offense rolling out 3 assists 2 points and a steal in 7 minutes of play.  Marcin Gortat continues to play consistently solid basketball at the Center position - he had 11 points and 7 rebounds at the half.  Good stuff from the bench, especially on the 2nd night of a back to back when the energy is much needed to back up the guys playing big minutes.

The 3rd quarter was a beautiful thing - the Suns continued their hounding defense while the offense of those who struggled in the 1st was a little more oiled and flowing.  Eddie Johnson and Tom Leander couldn't restrain their praise for the Suns defense - maybe it was just the shock of how well they were playing D,  but I just kept saying to myself - "yeah, it's really good D - but it's awful Piston's offense".  Couldn't get too excited.  The Suns held the Pistons to just 11 points and after 3 it was 61- 47.  A 14 point lead.

The 4th quarter started and it was the Will Bynum show.  His persistent pressure defense forced the Suns offense to tank - Gentry tried going to Nash early with 7 or so minutes left in the 4th in an attempt to trigger some offensive looks, but it was to no avail.  Bynum draped himself and swiped Nash out of his game too.  Suddenly the Piston's offense caught fire and the Suns offense and defense went cold.  The Suns looked like the Piston's last night against the NJ Nets when they shot only 3-18 from the field to blow their game.  With 8.9 seconds left in the game the Pistons had run the fourth quarter with 25 points to the Suns pathetic 9 points.  9 points.

I said 9 points and it's pissing me off just thinking about it.  It was 73-70 Pistons.  20 second time-out.  Somebody's going to jack up a 3, who'll it be?  Inbound waiting, waiting AND DETROIT COMMITS A FOUL BEFORE THE INBOUND.   Nash hits the freethrow, now it's Suns ball 73-71 Pistons.   Inbound in - swing it Channing, he let's it fly.... BRICK CITY.  Suns foul.  Somebody hits their freethrows, 3 seconds left in the game.  Hill Bret Favre's the ball down court to Carter who touch passes to an open Channing Frye again for 3... swish.  The clock expires.  The Suns lose 75-74.

Why did they attempt a 3 when they only needed a 2 on the Channing miss? Why didn't Gentry stick with Dragic longer - or put him in at 2 to help get the ball up?  Why didn't we start fouling earlier?   Who knows.  I'm over it.

I won't sugar coat it, this was an UGLY game and and UGLY loss.  To say it was disappointing would be a huge understatement.  This is the kind of loss that can kill any and all mojo you had previously been gathering with the win streak.  I'm done writing.  See you Monday - hopefully the team can spin this terrible loss and use it as motivation because I'm having a hard time doing that.

If you were perplexed by the technical difficulties on MY45 tonight - peep the tweet that Bob Adlhoch (@badlhoch) sent out during the game.  He said that Snow and TV don't mix - then he posted this picture. 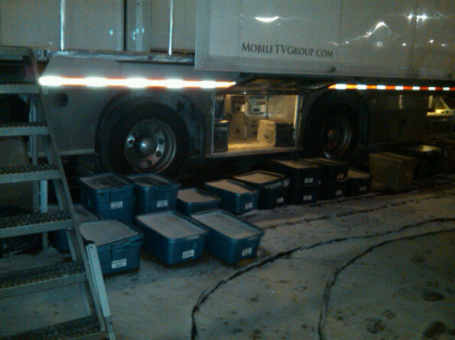 Go ahead and visit the winner's site.