Suns Defense Crawls Toward Respectability, Enough For A Playoff Run?

Share All sharing options for: Suns Defense Crawls Toward Respectability, Enough For A Playoff Run?

Since the debacle against Philadelphia - the first Vince Carter game, 3rd overall after "the trade for defense" - the Phoenix Suns have actually been playing pretty solid defensively. You can't tell yet by glancing at the full-season numbers, but the current Suns are now on the cusp of rising to respectability on defense.

At the culmination of the Philly game (Sixers won 123-110), the Suns defense was extremely close to being the worst in league history. Let that sink in: they were nearly the worst in the 40+ year history of the ENTIRE NATIONAL BASKETBALL LEAGUE. All time. Ever.

But in the 12 games since the Philly debacle, the Suns' defense has been remarkably better.

I know, you're thinking: there's no where to go but up, right? True.

Since the Philly game, the Suns' defense has been league-average, at 104.4 points per 100 possessions. And that includes the Knicks and Nuggets stinkers. The front line of Gortat/Lopez and Frye/Warrick has been pretty effective, allowing the perimeter defenders to stay closer to their man.

Temporarily, the offense regressed as quickly as the defense improved (also to league-average 104.7 points per 100 possessions over the past 12 games), which explains the rather pedestrian 7-5 record overall.

That's what happens when you infuse the rotation with defense-minded individuals mid-season. Give huge props to Nash for keeping the offense respectable despite have no pick-n-roll finishers in the lot.

But recent developments provide a ray of hope.

Over the 6 past games the Suns are winning the points-per-100-possessions battle 108.4 to 101. Sure, this has been against poor teams but that's a big improvement to the tune of a 5-1 record.

It's possible the Suns have turned a corner (last night's "dead legs" game notwithstanding), but the rest of the season is a long, uphill battle to playoff respectability.

There's two distinct chunks of games left on the slate, separated by the "week of truth". 13 games before, and 27 after.

From here on out, you have to say "week of truth" with that deep, echo-ey voiceover announcer baritone.

The "week of truth" occurs between Feb 18 (the day all Suns players can be packaged in trades) and Feb 24 (trading deadline). The Suns play only 1 game during that week (Feb 23).

Until then, the Suns have 13 games to prove their playoff-worthiness to the front office. 10 home games and 3 roadies. At minimum, it seems the Suns must be above-.500 to avoid a blowup.

That's an 8-5 record. Not too tough if you assume the Suns will continue playing with a top-5 offense and mid-pack defense as the last 6 games suggest.

Take a look at the schedule for these 13 games.

It's nearly impossible to win both games of a home-and-home against any team, and so many of those home games are against tough, tough teams.

There's your 8-5, assuming the Suns don't lose ANY games they should win from here until Feb 17. A very tall task, yet it certainly sounds reasonable if you combine a good offense with respectable defense.

Even then, at 28-27 the Suns are probably still in 9th or 10th place in the conference. At that point, Lon Babby will have 2 choices: keep the team intact or fortify it for a playoff run (Carl Landry?) OR blow it up altogether and shoot for a high draft pick.

Part of that decision-making involves looking at the rest of the schedule, trying to find a way to finish with 46 wins. Why do I say 46 wins, when it took 50 to make it the last few years?

Here's a forecast from basketball-reference.com: 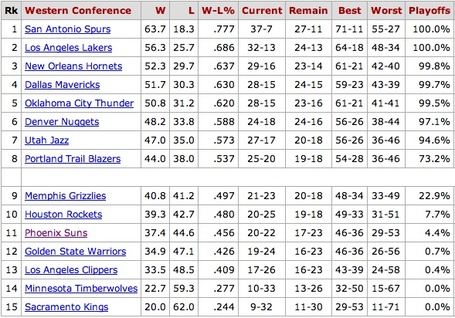 Two key things to take from this forecast. (1) the system projects the 8th seed to have 44 wins and (2) the system projects only 37 wins by the Suns. I think the Suns are much better than 37 wins, of course. This system does not take into account recent changes, and the Suns have had LOTS of them.

Here's the rest of the schedule post "week of truth". 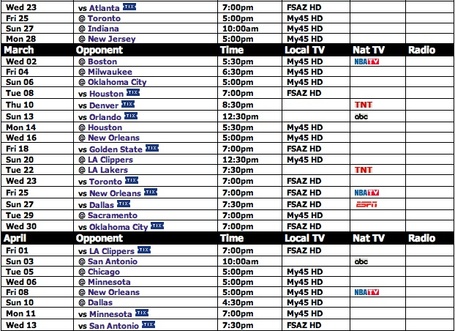 If you assume 46 wins are needed to make the playoffs, the Suns would have to go 18-9 after the "week of truth" (assuming the prior scenario putting their record at 28-27) just to get to 46-36 on the season.

Can the Suns win 18 of 27 games on this slate? A very tall task, but doable. You have to assume the Suns will be able to field a consistent, hungry team with a top-5 offense and mid-pack defense.

Let's do it by counting the fairly certain losses.

After the trade deadline, the Suns will have a 6-game roadie against tougher competition than this most-recent one. Best case: 4-2. Any reasonable person would chalk up a minimum of 2 losses (1 of Boston or OKC + 1 of the other 4 "easy" games). It's nearly impossible to run the table on quality competition on the road. But the Suns should be able to take 3 of 4 from the Raps, Pacers, Nets and Bucks.

Then there's a 3-game homestand against tough teams: Houston, Denver and Orlando. Best case: 2-1. The Suns have big reason to win every one of these games: Houston's a good matchup for us and Denver deserves some serious payback. The Magic game will be tricky. Gortat and Carter will be motivated, as will Hedo and JRich. A tossup. In the end, you HAVE to expect at least 1 loss in 3 games.

Then, 4 roadies against Rockets/Hornets/Clippers/Lakers seems certain to create 2 more losses at minimum. Best case: 2-2. If you count Houston as a win on that homestand, you have to count a loss on the road. Those are very likely to net out to a win and a loss. The other 3 games are against quality competition, and likely to produce at least 1 loss if not 2. Let's keep it on the Bright Side and call it 2 losses in 4 roadies.

Then the 4 homers vs. Warriors, Raps, Hornets and Mavs will add at least 1 more loss to the tally. Best case: 3-1. The Suns should be able to beat GS and Toronto, then split the Hornets/Mavs games.

Finally, you split Kings/Thunder at the end of March. Best case: 1-1.

By March 30, on the Bright Side, you're looking at a minimum of 6 losses. That equates to a 14-6 run, following up the earlier scenario of 8-5 till the "week of truth".

In a perfect Bright Side world, assuming the Suns are driven and playing as a strong unit the rest of the way, this is doable. Not entirely likely, but doable.

But before all that, we have 13 games for the Suns to prove themselves. 13 games before the "week of truth". 13 games to decide between buying and selling.

If the Suns can hit 28-27 or better by Feb 17, the Suns just might be a buyer in the trade market. The just might keep the team intact, maybe add a piece (Landry from Sac?) to the puzzle but otherwise ride this team to the finish. Carter can be traded at any point this summer or fall. Same with Pietrus and anyone else on the roster.