Share All sharing options for: Breaking Down the final three minutes of Suns loss to the Bobcats

There was a lot of talk after last night's game about heart and hustle and winning the loose balls and making plays. Here's the quotes:

"The bottom line is that there was 1:17 seconds to go and we never got possession of the ball on the three missed shots. We have to do a much better job finishing the game. We have to do a better job coming up with plays," the exasperated Suns' coach said.

"I just think it's concentration and discipline, I think we lack a little bit of that at times. We had a good stretch there and then we take a step back a little bit. We don't have the talent or efficiency to not win those battles, the 50-50 battles," Nash said.

So I went back and looked at the end of the game see exactly what happened. Here it is...

The Suns were down 5 to start the fourth quarter. With Nash on the bench and Hill hobbled by the knee injury, this was a dangerous time. But the bench did well...OK, the bench didn't suck. The Suns were down 7 when Nash came back in at the 6:34 mark. They at least didn't let the Bobcats lead balloon and force Gentry to bring Nash back in sooner.

1) The Bobcats follow up Nash's three with a quick score of their own. They ran a high pick and roll with Augustine and Diaw. Fyre and Nash blitz DJ and Dudley rotates over to Diaw to take away his three-point shot. Henderson smartly flashes to the high post leaving Dragic and Carter stuck trying to defend two guys. They both hesitate, not wanting to fully leave their man in the corner open but also not wanting to give Henderson the shot. Henderson rises up and hits the shot in the lane.

When the Suns decided to blitz the ball handler, that basically created a 3 on 2 situation and the Bobcats responded. DJ also made a great pass through Nash's legs to break the trap. This is exactly the kind of play the Suns failed to make when the Piston's were trapping Nash. 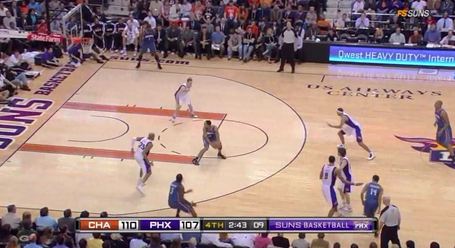 2) The Suns come back, now down 112-107 and with a lineup of Carter, Frye, Nash, Dragic and Dudley on the floor they have no real options other than a drive and kick. Nash drives, the defense collapses and Dragic misses an open corner three.

Nash beats Henderson for the ball and the Suns get another look that essentially results in the same thing. Drive, defense collapses, Frye misses an open corner three on the other side.

On the long rebound Frye fouls Augustine going for the ball. He maybe could have gotten to the ball by diving for it without pushing off on DJ right in front of the ref. 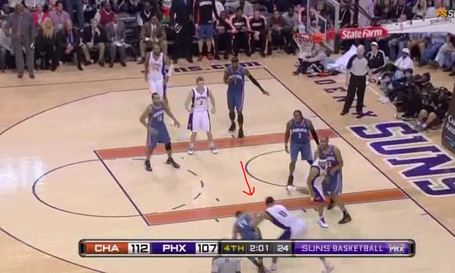 4) Sensing the need to get something other than a three, the Suns run a nice play that starts as a high pick and roll with Nash and Gortat but immediately off the screen, Nash passes to Carter who passes to Gortat rolling free down the lane. This is a classic Suns play that used to feature Hill passing the ball to Amare for a dunk.

But instead, Carter rifles the ball at Gortat's face and he can't handle the pass even though the play worked and he was wide open. Bobcats get the ball back. 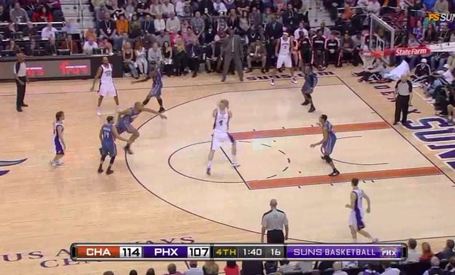 5) Now down 114-107 with 1:37 to go, the Suns play solid defense and rotate around until Henderson isolates on Dudley and drives right by him (Dudley really can't stay in front of most wing players) but Henderson misses the layup.

Off the ball, Diaw sneaks by Gortat for inside position and is under the rim when Henderson's shot goes up. Gortat doesn't pin Diaw under the basket and ends up losing the rebound to him. Think about that. Gortat got beat for an offensive rebound by Boris Diaw. To be fair, Boris has a strong solid base (fat ass) and is hard to move out of the paint once he establishes position. (I still have a soft spot for Boris.)

In these next two pictures you see Boris in position and Gortat just waiting behind him and then you see them both going for the ball and Boris winning it. 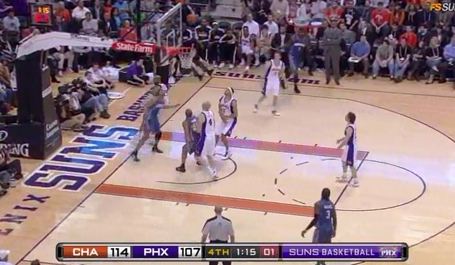 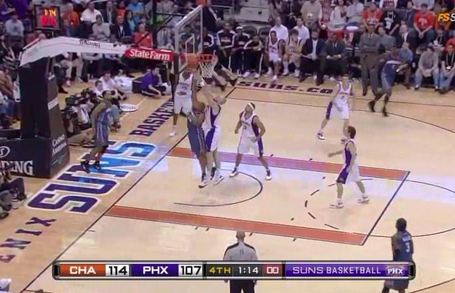 6) The Bobcats miss a three point shot and Dragic rebounds but there's only 56 seconds left and the Suns are down seven. Nash creates a wide open shot for Dudley but he missed the three. If he makes that, the Suns are down four with about 45 seconds. 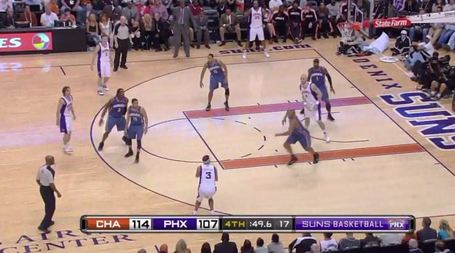 7) On the final play, the Suns are down seven with 45 seconds and decide not to foul. Gambo from KTAR asked Gentry about this and Gentry basically said the game was already over at the point so what was the point.

"We're down seven, what are we going to do," Gentry said.

Anyway, the Bobcats use up clock and fire up up a three which misses. Three Suns have inside position but Gerald Wallace ends up with the ball. Not that it mattered at that point, the team had already given up. 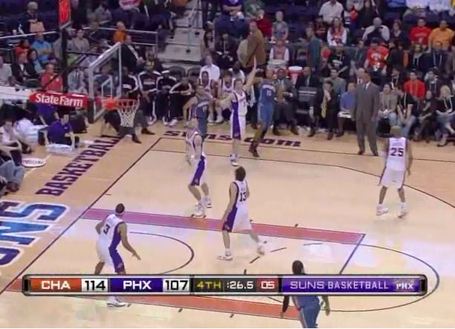 In the end, the Suns defense wasn't horrible down the stretch. They gave up four points and one critical offensive rebound. Two of those points were off a foul and the other two were a fairly well defended play. The rebound was Boris Diaw beating Marcin Gortat which shouldn't happen.

On the offensive end, the Suns score zero points in the final three minutes. They got nothing in the paint because the Bobcats collapsed on the drives and the the Suns missed three wide open threes and turned the ball over on their best play to get someone going to the rim. They (Nash) also got an offensive rebound during this stretch.

There were three big mistakes outside the missed shots. Carter's bad pass to Gortat. Gortat getting beat for the ball by Diaw. Frye's foul on Augustine.

But really this is about not having the ability to get to the line, score in the paint, or hit clutch threes. Those were all things last year's Suns were able to do and that cost the game and several others this season. Even early in this season both Hedo and JRich were guys who made big plays late in games. They are missed.

Now personally, the one guy on this roster that could have helped is Robin Lopez. He simply has to play better but Gentry also should be giving him more time on the court. He's played well early in the games but hasn't been allowed to stay in long enough to get anything going.

Lopez is the only guy on this roster that can post up any defender and there's no way he loses that rebound to Diaw. He's bigger and stronger than Gortat and would have won that tip. In fact, if he's playing well the Bobcats would have had to have had Kwame Brown in the game at center which limits their offense as well.

I realize that right now Gortat is playing better, but Lopez is the guy the Suns need to win these types of games and so at some point Gentry is going to have to start giving him the time to be on the floor and improve.