For the Kings, the real star was Francisco Garcia. He had two big offensive rebounds that led to four second chance points and he hit an open jump shot. He also drew a foul on Carter and got to the line but missed both shots. That's six points Garcia was responsible for. Omri Casspi hit two open threes for another six points. Cousins had the three-point play and a nice assist as well. Finally, Pooh Jeter hit two shots but he also missed two.

For the most part the Suns offense wasn't bad, they just missed very open shots and the Kings did a good job taking the ball out of Nash's hands and packing the lane. This wasn't like the Bulls or the Blazers games where the Suns had turnovers and were completely baffled on offense. They just missed shots.

Defensively, the Suns did an OK job with the exception of Carter's blown play on the final dagger three from Casspi and the failure of Carter and Pietrus to box out Garcia on two separate occasions which lead to an extra four points for the Kings. The Kings hit all their shots and the Suns hit none.

For those who thought Vince Carter could replace Jason Richardson, he's done a good job in this one game by both blowing a key defensive assignment and also failing to box out at a critical point. Well done.

Because I was up anyway, here's a break down of all the plays with pictures.

1) Nash is playing off the speedy Pooh Jeter and gives up the kind of pull up jump shot that most guards can take against him. To be fair, Jeter hadn't played in the game at all until the 4th quarter and hadn't yet hit a shot before nailing this one. 87-77, Suns. 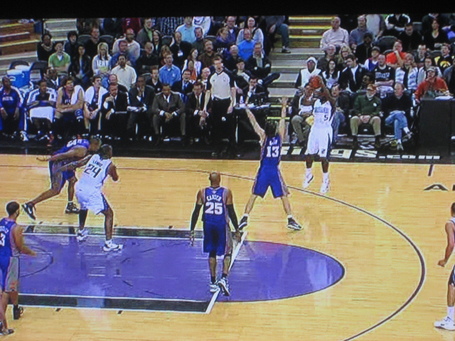 2) The Suns come down and run a Nash / Gortat pick and roll that had been pretty effective most of the game. The Kings rotated well and walled off a lane to the hoop so Marcin stopped and tried a little shot in the lane. He was open but missed. 87-77, Suns

3) The Kings come down and Garcia drives and instead of playing solid defense, Carter tries to get the charge but is too slow and fouls. Garcia misses both free throws. 87-77, Suns. 5:05. 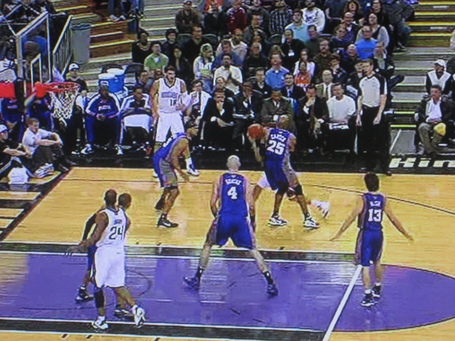 5) Jeter tries another shot but misses. Garcia beats Pietrus to the ball and grabs the offensive rebound and gets the easy put back. 87-79, Suns. 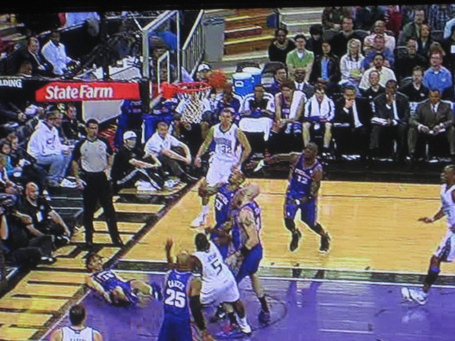 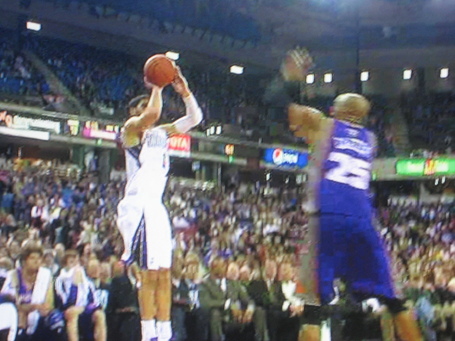 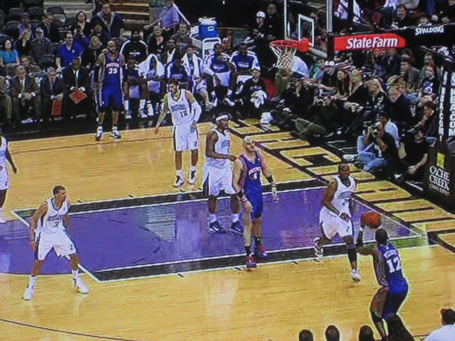 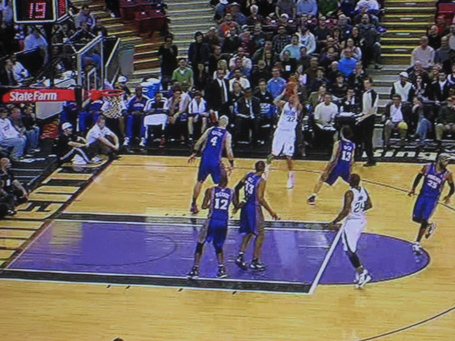 11) Jeter takes another pull up shot that misses. On this picture look at the top of the screen and notice Vince Carter guarding Francisco Garcia. 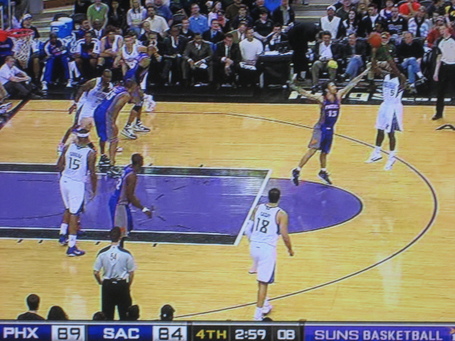 12) Garcia comes all the way across the lane and when the ball bounces out after Gortat and Cousins fight for it he's there for the rebound. Look where Carter is. 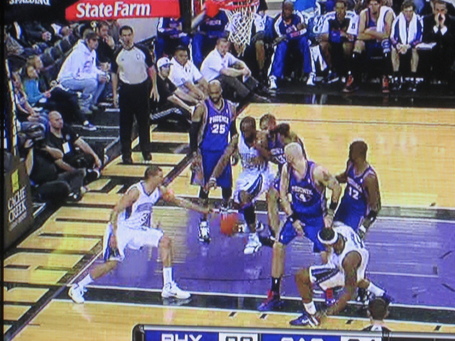 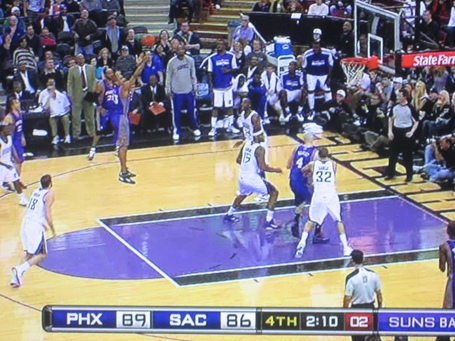 15) Gortat makes a great play on Cousins and blocks the ball out of bounds. He then comes back on the next play and leaves his feet too soon and fouls Cousins who somehow makes the shot while falling down. He hits the free throw as well. 89-89, tie. 1:48. 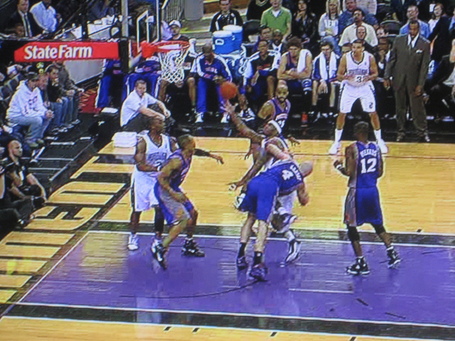 16) Here the Kings play great defense and the Suns end up with a shot clock violation. At one point Nash has Cousins switched on him but passes up the shot and then late in the clock Gortat passes to Nash instead of taking the shot at the buzzer. This was the only really bad Suns offensive possession. 89-89, tie.

17) Jeter takes and misses another shot and the Suns rebound. Phoenix gets Carter an open three and he misses. 89-89, tie. :42.

18) On the key defensive play of the game, Vince Carter is caught not paying attention and he's sagged off Casspi. He doesn't see the pass going to Casspi until it's too late to close out and effectively contest the shot. Casspi nails it to give the Kings the lead. 92-89, Kings. :25. 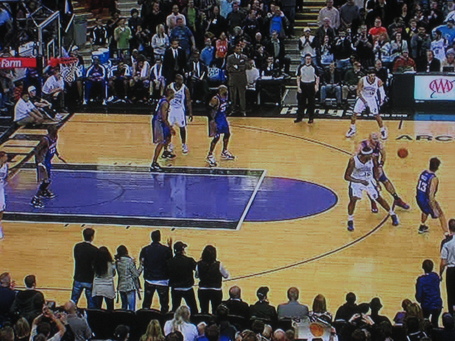 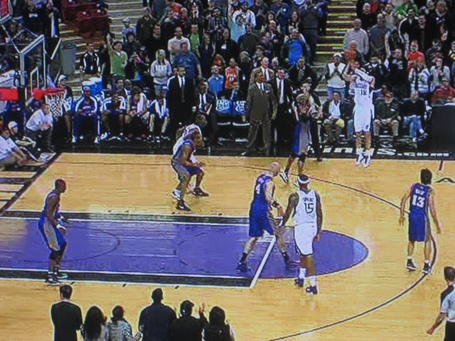 And finally, Gentry giving Carter the WTH look after the shot goes in. 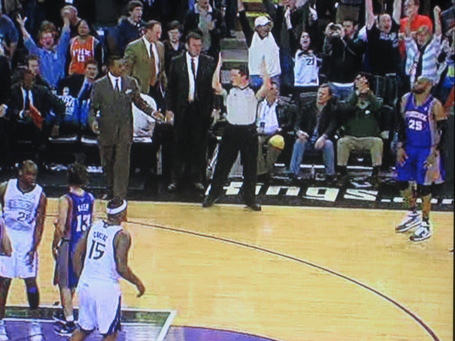 19) On the final play, the Suns try to get Nash open but the Kings switch the screen. Nash drives and kicks to Pietrus but Casspi recovers and chases him off the shot. Pietrus decides not to drive and get an open two and instead sidesteps and takes a three but Casspi has recovered and Pietrus is forced to shoot the ball high to avoid getting blocked and it sails over the rim. Ball game.

Perhaps Nash should have gone to the rim instead of kicking out and Pietrus certainly shouldn't have forced another three but it never should have come to that final shot. 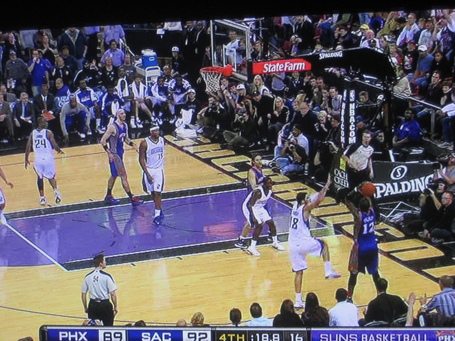