Are you still on a high from the Celtics game? Yeah, me too. For a team that has underwhelmed for nearly the entire season, nobody expected last night's outcome. Nobody. If you're sitting there saying, "The Suns always play up to their competition, I knew they were going to win, blah blah blah" I won't believe it. I just won't.

However, even though it's all smiles in Suns-ville right now, last night's game means nothing if they don't pick up a win tonight. The defense, rebounding, mental toughness...everything. It was all there on Friday. But if we're run out of our own building against a Hornets team that lost a late game in Sacramento just last night, Friday's win will be but a mere blip on the radar of relevance.

That said, the Phoenix/New Orleans matchup has always been a fun one. Fortunately, Peja is gone. I don't care if he had back surgery the day before, he'd still probably come in and drop five threes on us. Unfortunately, Chris Paul is also a Suns killer. He's also been playing excellent basketball as of late, averaging 15.7 points, 9.4 assists, 3.0 rebounds and 1.8 steals on 44.6% shooting (50% from three point land) during the team's recent 10-game win streak.

In his career, Paul has averaged 22.4 points, 9.1 assists, 4.9 rebounds, 2.8 steals, 45.8% shooting (36.2% from three) against the Suns. To me, the most staggering stat of that line is the steals. Averaging 2.8 steals per game in 14 contests? Crazy talk. If the Suns are going to win this game, they need to take care of the ball and apply the same defensive intensity that they did against Boston. If that doesn't happen, we won't win. Simple as that.

Oh, and another thing? The Hornets are coming off a late loss in Sacramento. Expect the Suns to use their relatively fresh legs to jump on the Hornets, much like they did against the Celtics. From a defensive standpoint, Phoenix should be able to utilize their day off and pounce on the Hornets. Offensively, we should see the Suns' big men attacking early, either getting to the rim or getting to the free throw line.
When the Suns get to the free throw line, good things happen. In wins, the team gets to the line at an average of 28.3 times per game. In losses, that number dips to 21.7. That's a difference of only 6.6 free throws, but if you factor in the point differential in wins vs. losses, those numbers suddenly become more interesting.
In wins, the Suns win by an average of 9.2 points. However, in losses, the team loses by an average of 11.1 points. It is clear that when the Suns are the more aggressive team, good things happen. Just how many more games could have been won if the Suns got to the line at their average for wins, you ask?
We'll round the +6.6 up to a +7, just to give the Suns the benefit of the doubt. Now, let's take a look at the schedule. There have been 10 games decided by 7 or fewer points. That's 7 games that would have been won and 3 that would have been sent into overtime if the Suns got to the line at the rate they do in wins. Factoring in the Suns current W/L record in overtime games this season (2-2), and we'll say they go 1-2 in our hypothetical OT games. That puts the Suns at 29-16.
Now, let's get even crazier. We're almost done in hypothetical land...just hang in there.
Considering the teams that the Suns would have beaten in this dream land of ours, we'll factor in the losses to their records. That gives an extra loss to the Lakers, Nuggets, Trail Blazers, Grizzlies, Clippers, Kings, another to the Lakers, and the Pistons. Do some number crunching, and that leaves the Western Conference playoff picture looking a little something like this: 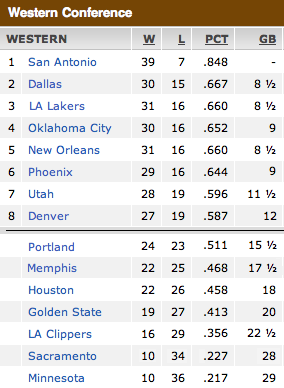 (Note: As much as we all wish it, this is not real. Just in case you didn't read anything above.)

And there you have it. The Suns are the hypothetical sixth seed in the Western Conference playoff picture, all if they were more aggressive in each game. While this is mostly completely ludicrous, it just goes to show how much of a difference playing all out on the court can make. If we could somehow take Steve Nash's basketball smarts DNA, fuse it with the athletic genes of say, an Amar'e Stoudemire, and throw in Dudley's heart, we'd have one helluva player. But pretend time is over now.

On a more realistic note, we are playing a Hornets team who, prior to last night's game against the Kings, had won 10 straight games. Say all you want about the Hornets dropping the game, they are still a team on the rise. Do I think they're a force to be reckoned with for the NBA title? Probably not. But when you beat 10 teams in a row, with wins against Denver, Orlando, Atlanta, San Antonio and Oklahoma City, you know you've got a pretty solid team.

Expect the Suns to bring the same desperation and fire they had against the Celtics. They may very well not show up for this game, but we need to start expecting this team to bring it night in and night out. This is when good teams show what they've got and bad teams fold. If this season is any indication, we all have the same nagging feeling of what's going to happen tonight. But it's time to truly find out which team we have.

Goran Dragic Out With Nine Stitches In Foot, Opportunity For Zabian Dowdell

Phoenix Suns guard Goran Dragic will miss several games due to a foot injury suffered at his home. Backup Zabian Dowdell is ready for the opportunity to step in.

Goran Dragic is out for probably the rest of this homestand after having accidentally stepping on glass. With Dowdell filling in as our backup point, it is hoped that he will be able to at least provide around 10-15 minutes of quality basketball. At this point, all he needs to do is come in, do his thing, and get Nash some rest. If he can do that, job well done, Zabian.