I'm a little late posting this but last Saturday October 15th Yahoo NBA writer Marc Spears tweeted the news that Kansas University draftees Markeiff and Marcus Morris will begin training with former NBA All-Star Shawn Kemp. Initially I had a hard time seeing this as positive news, but a few quick Google searches and my fears of Markieff hanging with the 'Reignman' eating Krispie Kreams and listening to prison stories were abated. Jump to hear why.

Let first get this out there - when I heard the name Shawn Kemp my thoughts were immediately? The 'Blimp'? Doesn't he have a billion kids? Didn't he go to jail for drugs and stuff?

Yes. He made a lot of stupid personal decisions as an NBA star. He currently has 9 children with multiple women (one of which, Shawn Kemp Jr. is a 6'10" scholarship Freshman at the University of Washington) , he famously ballooned up during the (irony ahead) 1998 lockout and his play suffered and he suffered emotionally as well. He abused drugs - was arrested twice (2005 & 2006) for drug and weapons charges and ended up serving time in prison. Just begin typing his name into Google and the instant result function shows a little of his reputation... 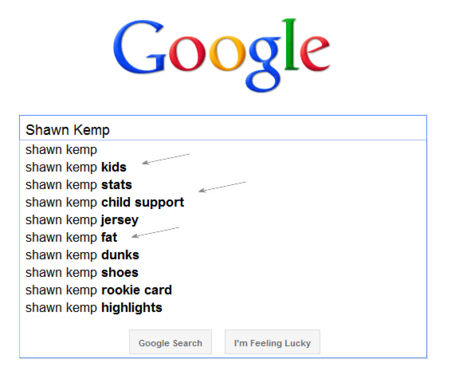 His NBA career ended with multiple failed come-back attempts due to 'personal matters' and his final come-back attempt marred by an injury sustained while training a short time before signing with the Washington Wizards.

That's what I thought at first. But remember this, Shawn Kemp is a 6x NBA All-Star (which might not mean a whole lot...) but during the prime of his career and before the weight issues Kemp nearly averaged a double-double for 8 years. He could dunk, and he was 'aight' at rebounding, and he could dunk. I mean he could really dunk a basketball and not just donuts.. okay I'll stop.

Then I read this article out of Seattle where Kemp has returned to make his permanent home.

Supposedly - Kemp has turned his life around, he's in much better shape and is looking to help people because of his life experiences. Here's the biggest take-away from the article,

"Look, I've made mistakes, and I'd like to say that I wish I could change things, but in the end what I've learned and what I know now, it's a lot. And I think, because of that, I can help a lot of people."

The article says he's been working with current Philadelphia 76ers Center Spencer Hawes. Does that encourage you?

I'm going to be blunt. My expectations for Markieff Morris aren't very high and they won't change knowing he's the grasshopper of Masta Kemp. I see any help as good help.

Earlier this summer It was Garret Siler and Marcin Gortat who were learning the ways of the Jedi and seeking help from Hakeem Olajuwon, now it's Markieff Morris and Shawn Kemp. Whatev. I'll be excited about this tutelage if and only when Markieff Morris contributes in a special way and credits his instruction from the Reignman. Until then - I'll hide in my cave until Basketball is real again.

BTW - Lockout UPDATE - the Lion the Witch and the Wardrobe have been meeting in the castle for 9 hours 35 minutes and 45 seconds.