Gani Lawal is the New Dragon, the Best Center in Poland

Share All sharing options for: Gani Lawal is the New Dragon, the Best Center in Poland

Need a break from your BRI's and MLE's and NBPA's and your FU David Stern's?

Whhoooooo-weeeeeee ladies and gentlemen gather around and let us discuss a basketball player who is actually playing basketball!

It was Gani Lawal's 23rd birthday on Monday, and what could be a better birthday present than to receive high praise from your coach and the national media about your dominating level of play? How about receiving high praise from a foreign coach named Tomasz Jankowski and the national media of Poland - a country that had no idea who you were six 4 months prior? That's kind of cool eh?

Okay - so a better birthday present would be to receive that kind of praise from the likes of Alvin Gentry, and the national media of the US, who cover that one league that's really popular everywhere in the world and not just in Poland... but given the current circumstances of the NBA, that's a pipe-dream to be wished upon a star that even the Blue Fairy of Pinocchio couldn't bring to life.

The reality is - with the NBA locked-out - this is as great of a compliment a young player could get and we should be proud as fans of Lawal's achievements. Gani plays in the Tauron Basket League in Poland for a team called Zastal Zielona Gora, and currently he is sporting an impressive stat-line of 16.9 ppg and 11.7 rpg.

Coach Jankowski refers to him as "the top big in the league" and as "a Dragon" in the paint. We once had a Dragon, and now we have another... So how do you train your dragon? Because we traded our last Dragon away after giving up on his progress. Let's figure it out after the jump.

Apparently the Dreamworks film was on to something (On a side note - I recommend this movie to all, definitely a good wholesome animated movie that will make you laugh). You see in the movie, we're shown your dragon has to become injured before you can acquire a trust with it to a point where it will take instructions and open up emotionally and perform for you.

Gani blew out his ACL early last season - and while injured, a bigger fire burned deep within him mentally and emotionally - his focus on recovery and improving his game was heightened (not to mention his NBA team turned around this year and lottery drafted some competition for him at PF in Markieff Morris). We are now seeing the results in his play for TBL.

My friends - unlike our familiar Dragon of the past, Gani Lawal can bite. This is not only evidenced by his brawl in a League scrimmage earlier this year but also attested by his Phoenix Suns teammates - especially Channing Frye who I've personally heard call Gani a 'dirty' player in practice (all with a smile of course). That's the kind of Dragon in the paint we want, a bludgeoning fire-breather.

Now let's have a little fun. I'm guessing Gani won't like the nickname 'Dragon' as he prefers to be called "G"... but our community here at Bright Side of the Sun is always in need of multiple nicknames and whatnot for our players. Let's take a look at some famous dragons and if they represent G properly and maybe we can find a good meaningful pet name for G.

Story: He's the dragon in the Dreamworks film "How to train your Dragon" that the main character Hiccup catches and tames. He's a Night Fury dragon - one of the most feared by the Viking people and one of the most intelligent dragon species out there. In the movie it turns out that once tame - Toothless is a softy at heart but a warrior when it's time to do work. 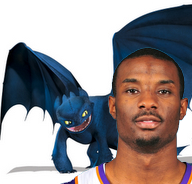 Euty-take: Gani fits the role... he got injured like Toothless, he's a soft-spoken and humble guy on the outside but a warrior when it comes to throwing down a dunk or fighting for a rebound. I'm not sold that anyone would want to be called 'Toothless' though...

Story: Spyro's a dragon in the 1998 video game Spyro the Dragon, the Legend of Spyro. Spyro is a young, purple Dragon with large curved horns, a spiral-shaped spike on the tip of his tail, and spines resembling a mohawk. 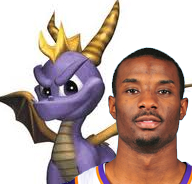 Euty-Take: Nah. Too cartoony and kind of dumb. Just wanted to take all you gamer Bright Siders out there on a journey back in time.

Story: Oh baby, the Hydra is a Greek Mythology dragon that had lot's of heads, and when you went to cut off one of the heads - two would grow back. This bad boy would come out of the swamp - eat entire herds or flocks of animals and just drop absolute terror and the vicinity of Lerna. So what happened? Dude Heracles traveled to the swamps, drew the beast out of it's lair by shooting flaming arrows at it... sliced off a bunch of it's heads and burned the bloody stumps so more heads wouldn't grow back, then he cut off the main head - said to be immortal - and he buried it deep in the ground and covered it with rocks... and the Hydra's bellowing screeches can be heard to this day... 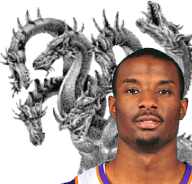 Euty-take: Hydra would be a pretty cool nickname, if Gani ever develops a jump shot or a back to the basket game we could say his game had many faces, or many heads and he really could be like the Hydra...

Story: Bahamut also known as "the King Dragon" is the beast of all dragon beasts in both Dungeons and Dragons and also the very popular Final Fantasy video game series. Not too sure what the Dragon's role is in D&D, but I know I can speak for FF when I say that Bahumut was a Dragon familiar that could be summoned by your characters to absolutely poop all over your opponents. Just watch this clip and you'll get the idea. 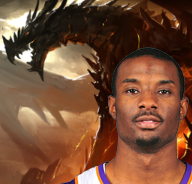 Euty-take: Bahumut is by far my favorite dragon, he's just beastly. I think this one takes my vote, I can imagine the Leander call - "G-man with the Slam and boy can he bomb it like Bahumut - that's why they call him the Dragon"

Alright enough of this... now that I've exposed my extremely nerdy side to you all I want you to comment and make this post have more comments than Alex and EBR's lame lock-out posts because it's like a bajillion times cooler.