The Wayman Tisdale Story: A Man of Prodigious Gifts

Share All sharing options for: The Wayman Tisdale Story: A Man of Prodigious Gifts 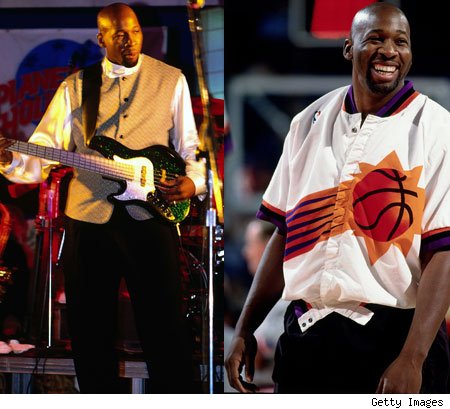 "My gift is to be able to make you listen, to get an emotion out of you, and to make you feel better, feel good inside. That’s me. I’m the happy music man. I’m the candy man."

We could use a happy music man right about now, couldn't we? NBATV's documentary "The Wayman Tisdale Story" recently aired, and it wasn't much about basketball. For a man who was a 3-time All-American, member of the National Collegiate Basketball Hall of Fame, and 2nd overall pick in the NBA draft who went on to play 12 seasons in the league, including 3 with the Suns, it's exceptional that the story is more about Tisdale the musician and Tisdale the man. He was an extremely talented basketball player, but that's only a small part of what made Wayman Tisdale an amazing person.

First, take a moment to look at the smile on Tisdale's face in this picture. I've seen countless pictures and videos of the man, and that beaming smile is always there, bringing his joy to share with the rest of us. That is a gift in itself, but it also presented a man who achieved success in basketball, music and life, and who never let life's setbacks take his smile away from him.

Tisdale was a phenomenal college basketball player. Making first-team All-American three times in three seasons is no small feat. His performance as a freshman at Oklahoma was so dominant that the outstanding freshman of the year in college basketball each year is given the Wayman Tisdale Award.

He was selected #2 overall in the 1985 draft by the Indiana Pacers, later traded to the Sacramento Kings, and signed as a free agent with the Suns in 1994. It can be said that Tisdale's pro basketball career was a disappointment (he was drafted ahead of Karl Malone and Joe Dumars), but basketball turned out not to be his true passion.

When Tisdale retired from the Suns in 1997 to pursue a music career, I admit that I was a bit skeptical. OK, yeah, an athlete wants to play around in music. Ah, but I was wrong. His musical aspirations were no lark at all, and Tisdale played bass and sang on eight studio albums, reaching #1 on the contemporary jazz charts with "Face to Face". The man could play.

That 2009 performance came after he was diagnosed with cancer and lost half of his right leg. He needed a little help walking, but he didn't need help to play bass, sing and thrill the crowd. Tisdale did this until his end.

To push through, the 6-foot-9 "gentle giant" recalled the challenges he faced during his basketball career. "I had some coaches that literally didn't want me to make it, and one in particular was [Team USA coach] Bobby Knight," Tisdale says. "At the time, I frowned on that … I look at it today that had I not persevered through a lot of the stuff he put me through, I probably wouldn't be here today. I thank God for that dude because he pushed me."

from Tisdale Reaches for His Biggest Rebound

"The average Joe comes in, thinks the world's over, they're all alone, disabled, etc.," Sabolich says. "Someone like Wayman goes through the same experience of losing the limb but he's such a stellar personality that this didn't faze him much. You ask him if he's OK and he says 'I'm fine, this is just a little roadblock.'"

Tisdale succumbed to cancer on May 15, 2009. His spirit has yet to give in. And that, more than his considerable talents at basketball and music, is his legacy. A world class athlete has his leg taken away, and he's still meeting the challenge with a smile.

The current NBA labor and Suns mediocrity situation is troubling. None of us can say definitively when either will be solved. But it will pass.

"I'm fine, this is just a little roadblock."