What Does The New CBA Mean To The Phoenix Suns?

Share All sharing options for: What Does The New CBA Mean To The Phoenix Suns?

Let's take a look at the new (tentative) CBA to see what the Suns can do this season with their roster.

First, we must establish where the Suns fit into the new rules. Are they a Room team, a Cap team or a Tax team? This determination is made at the beginning of free agency, for the purposes of the rule set they must follow throughout free agency and into the season (with some specific exceptions outlined in the CBA).

Where are the Suns today, and what can they do in this abbreviated free agency and trading period?

A Room team is one whose salary cap number slides under $58 million. These teams can spend up to that 58 million cap. After that, they can only use Bird, minimum-salary and a new 'Room Team Exception' (2.5 million) to exceed it.

A Cap team is one whose salary cap number fits between $58 and $70.3 million. These teams are limited to using exceptions only: the new Mid-level (starting at 5 million, with a 4 yr max), bi-annual (starting at roughly $2 million, 2 year max), Bird Rights re-signings and veteran-minimums. Caveat: those who are less than 1 million away from the 70.3 can only offer a mid-level that keeps the team less than 4 million over 70.3 after the transaction is complete. Same is true for sign-and-trades.

A Luxury Tax team is one whose cap number is more than $70.3 million. These teams are even more limited in their spending (this was the main crux of that last month of the lockout). But since the Suns are not in this category we can discuss those rules in a different story.

Where are the Suns? Check out this excel sheet (click to enlarge) 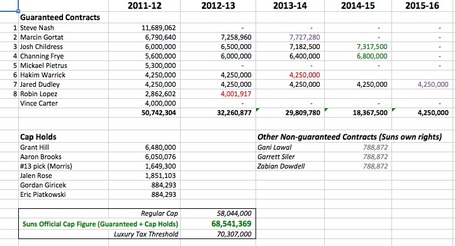 The Suns, despite having only $50.7 million in guaranteed commitments this season (assuming the 4 million to release VC), have another 18 million in "cap holds" that place them squarely in the Cap team group.

"Cap holds" are those expired contracts that remain as holds on the team's salary cap so they won't circumvent the cap rules by allowing all their contracts to expire, then sign $58 million worth of new talent and THEN exercise Bird Rights to re-sign their old players. "Holds" are usually bigger than the last contract amount (Hill and Brooks are 200%, for example) to further dissuade this practice. Teams can renounce these players at any time, but that renounces their ability to exercise Bird Rights (longer contract, larger raises) on them.

So, the Suns are a Cap Team even though they only have 8 guys under guaranteed contracts.

This means the Suns can supplement their 8 signed players using only the following options:

This means that the most the Suns can offer any one player, unless they execute a sign-and-trade or extend-and-trade is $5 million in year 1. Look at the fringe-starter market for the Suns this offseason. This is true for most of the league, however, and is down about 20% from last year ($5.85 million to start, on Chilly's contract).

While sign-and-trade and extend-and-trades are still allowed, they are only allowed with shorter contracts like regular free agents. (Example: Amare actually signed a free agent contract with New York, not a Bird Rights contract, so that sign-and-trade would be allowed. Example 2: Carmelo Anthony, however, signed a full Bird Rights extension in conjunction with his trade to New York. In the new CBA, he would have been limited to 3 new years at 4.5% raises versus 4 new years at 7.5% if he'd stayed in Denver at least 6 months afterward.)

Otherwise, if you're looking for the Suns to acquire a star, they would have to make a big trade. And since their second-biggest contract is only about $7 million a year, the Suns would have to package multiple players to acquire that star.

Expect a lot more trades this year than in prior years, especially since most of the league is made up of Cap Teams.