Share All sharing options for: Former Phoenix Sun Oliver Miller Likely to Go to Jail - And Some Other Stuff

What's up homies. How did everyone cope with missing our home-opener last night due to the lockout? I don't know about you guys but I'm living life on the edge now that we're missing games... I binged on leftover Hot n' Ready Little Caesar Pizza and warm Mountain Dew while I stayed up till 3 AM watching Storage Wars and American Hoggers, all while wearing my Grant Hill jersey and two Gorilla costume gloves.

Anyways - I guess we have some semi-Suns related news to discuss. 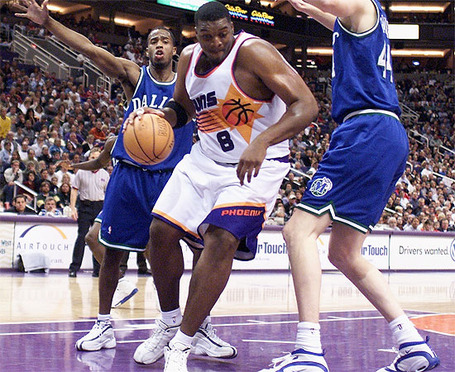 Former NBA journeyman and Phoenix Suns BIG-man (haha) Oliver Miller plead guilty this week to first degree Assault and carrying a handgun and will more than likely serve some time in prison.

This isn't good news... but what news is good news when it comes to the NBA these days? More details and some other goodies about Nash and whatnot after the jump. Jump it foolios.

Here's a quick disclaimer - I don't mean to make light of serious issues, especially when people commit serious crimes and especially when people get hurt... and it's not funny at all that we hear of so many former professional athletes getting in trouble fo.... Ah what am I saying!? Of course I'm going to poke fun at this - you want the serious stuff? Go listen to NPR. Or read this.

So here's my partly fictional, partly science-fictional, a little bit of truth breakdown of what happened . Earlier this year in April 'Big O' was (and this might be hard to believe) at a family BBQ chowing down. He was like, "OH MAN, these ribs is hot. Om nom nom". Reports then say that there was a family argument involving Oliver and his Girlfriend's brother. I imagine his girlfriend's brother was like, "Yo Dunkin (a stab at his playing days nickname 'Dunkin-Donuts' issued for obvious reasons), can you pass me them greens over there?"

A very heated and passionate argument ensued where Jason plead with Oliver to watch his weight because he was genuinely worried about his health and his ability to watch over and take care of his sister let alone their future posterity. Oliver followed Jason home, continually challenging him to a game of HORSE in order to settle the argument once and for all - that his size was an attribute and skill that enhanced his game rather than a negative barricade that prevented Oliver from reaching his full potential as a player.

When Jason refused to play for the last time and began to enter his house... that's when it all went downhill for everyone. In a fit of uncanny blood-rage, The Big O lifted his stomach to reveal a concealed and illegally possessed handgun. Like lightning he struck - pistol whipping Jason in the head and face repeatedly and then fled the scene to a nearby corner store where bought beer and pork rinds to snack on while he awaited his arrest.

Some real facts now - He really did pistol whip his girlfriend's brother after an argument at a family BBQ - Jason needed 11 staples after the assault. Oliver Miller did indeed plead guilty to the assault and to illegally carrying a firearm. The max his sentence could give is 25 years in prison, but most peeps seem to think he'll spend between 3 to 9 years in jail given the fact that Oliver's record was clean until this incident.

We should have seen this coming - Big O had a temper

You see how he went for the chair? This is something to pay attention to, we should all be weary of those who go for a chair during a scuffle. We're looking at you Nenad.

Anyways. It's too bad about Oliver Miller and it's too bad we continue to hear these troubling stories about pro-athletes and their run-ins with the law. 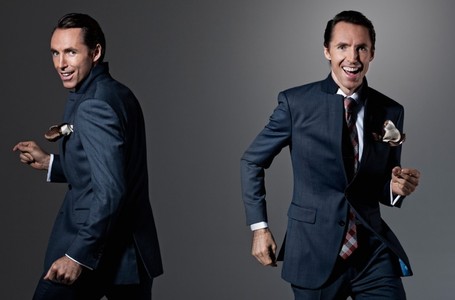 In other news, you might have heard Steve Nash launched his own line of Indochino suits this past week. Sharp suits, and affordable - 500 bones for a brand name Steve Nash suit is a great buy in my opinion... not something that fits my budget at the moment but if I had the means to buy nice suits I'd get a Steve Nash.

Oh yeah - Nash also stated the obvious in an intellectual manner as usual regarding the lockout. Supposedly this is headline news today and stuff. Whatever.

"You have two wealthy sides arguing over percentage points," Nash said. "It's hard for fans to understand that this is a business. I don't blame them. If I were in their shoes, I'd be critical, frustrated or even angry. You just want to see the game you love. Both sides are arguing for inevitably selfish reasons, but also for what's right when they are gone. It's a big mess." READ MORE

Have a rice day.