Reporting live from US Airways Center where the NBA lockout has been lifted and the Phoenix Suns are back in business. None other than two-time MVP Steve Nash is in the building along with teammates Zabian Dowdell and Robin Lopez.

No one has any idea what the players will do while they are here but we are staking out the hallway to talk to them when they leave. Members of the coaching staff have been spotted as well but apparently the coaches and players are not allowed to interact and we've NOT seen ANYONE breaking ANY rules.

WE ARE NOT KIDDING OR BEING SARCASTIC.

No one knows what other members of the team might show up today. It's believed that Jared Dudley and Channing Frye aren't in town yet and no one's heard from Marcin Gortat who could be at his home in Florida or he could be in Poland. He also could be in New Zealand for all we know.

Stay tuned for more breaking news as players ARRIVE TO THE BUILDING. 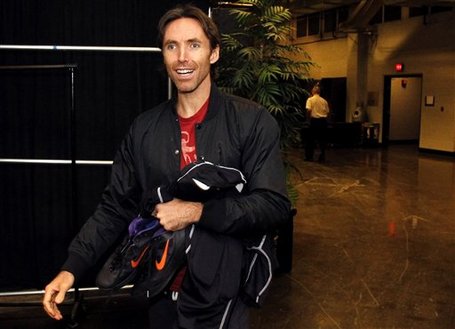