Yo Brightsiders! Welcome to installment numero tres of our look at the 2011/12 Phoenix Suns roster by position. Today we will look at our Point Guards. Only 4.5 days until the regular season opener!

All I want for Christmas is a back-up point guard who won't screw things up too bad when Nash leaves the game.

Let's face the facts - we know Steve Nash will start, he looks like he's in great shape and ready to get the ball rolling, or bouncing. But how will Aaron Brooks bounce back from his 'eh-so-so' showing after the trade last.... oh wait, he's still in China? Dang.

We know the Suns front office has done a pretty good job so far by bringing in some quality players and also keeping a sense of continuity and familiarity by not doing too much. Now whether or not that's the right thing to do philosophically and from an arm-chair GM standpoint is an entirely different conversation.

At the Point the Phoenix Suns brought in two veterans in Sebastian Telfair and Ronnie Price to battle it out for the back-up spot behind Nash.

Steve Nash - the Only Certain Starter

Weaknesses: Does the most interesting man in the world have weaknesses? Then why would you ask if his mentor did?

The lockout is and was many many things - ugly, stupid, jerk-face, dumb-heads - those words come to mind first... but throwing my childish emotions aside and placing my philosophical goggles on, the lockout was a double-edged sword for our Phoenix Suns. Before the lockout inhaled any games, the regular season schedule looked really good for our sun-setting Suns (I'm talking about Grant Hill and Steve Nash if you didn't catch that metaphor). There were only 16 scheduled back-to-back sets, that was the least in the entire league!

But what was good, at least for Steve was the fact that the extended summer gave him a better opportunity to nurse and heal his previous year's injury, that pelvic gyrational stabilization of instability injury... you know, that one. It wasn't until August of this year that Steve Nash publicly stated that he felt he had finally come back to 100% health and could do more basketball moves in his training.

It's the Gorilla 'other' Gorilla in the Suns locker room. Nash is grinding down. Consider this.

To be fair, at the beginning (or for about the first half) of last season Steve was playing at a VERY high level, numbers comparable to his MVP years - but once the injury hit, his numbers dipped significantly. He also led the league in assists - again. Can we blame all his shooting/playing time dips on his pelvis? Maybe. But remember, Nash has chronic back problems, and it wasn't but 2 years back that he also played very well at the beginning of the season - only to tail off as the grind wore on. 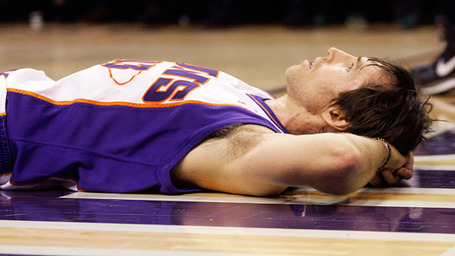 All indicators (Coaching staff, media, teammates) relay the message this year that Steve is playing at a 'High' level, that he's 'in mid-season form', that he 'hasn't lost a thing'. That's familiar, because that's how Steve Nash is - he prepares rigorously for the new season by doing anything but basketball. Steve might be in terrific shape to run a marathon every week - or even to join a professional Soccer club and play at an elevated level... but I worry that it's Steve's basketball muscles that are wearing down. I don't doubt that he'll start the season off looking amazing. I'm concerned about how it'll end.

Is the shortened schedule a blessing - being that there are ultimately less games to be endured? Or will the lack of rest between games and the increase of back-to-backs be the straw that broke the camel's Steve's back? Nobody knows. Not even the "Smartest Suits in the Room" know the answer to that, but there is definitely something they can try to do about it, and they did. They brought in two legitimate candidates for the back-up point guard spot.

I'm going to brush off the shaky performance in both the team scrimmage and the 1st preseason game and evaluate Telfair based on a bigger pool of performance - I'll do the same for Ronnie. I don't snap-judge like most of you heathen. Just playing. But for reals. 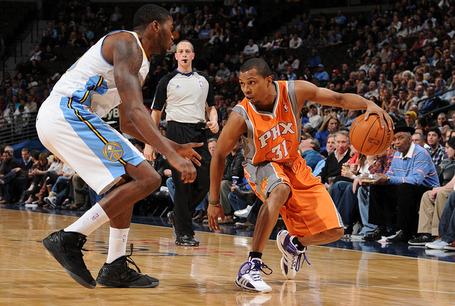 His work ethic is great and he has a lot of experience in the NBA, but he's been in the league for 7 years on 6 different teams and hasn't been able to pin down a starting job - even when he was on perfect teams to do so. To me that kind of says a bit by itself. When asked, Telfair replies that he feels he just really hasn't had the right opportunity, not only considering teammates but also coaches and styles of play as well, he feels here he has a great opportunity, or even a perfect opportunity to show the NBA and Phoenix Suns fans what he can really do.

So far this preseason he has indeed shown good skill in executing the pick and roll - but has had a hard time pushing the ball up court and dictating the tempo. The key for this position and because of our lineup and our style of play, the Point Guard has to push the tempo and be unselfish with the ball. If Bassy can keep this in his subconscious forefront he'll improve and excel with this team behind Nash.

I hope he does play at his best level and I hope he can at least keep the Nash-to-bench effect to a manageable lull instead of the cavernous drop we've seen in the past. Another concern I have his is his mental concentration - if he does get beat out of the #1 back-up spot by Price, will he hang his head and sulk? Or will he continue to work hard and be ready when his number is called?

Strengths: Above average defense, athleticism, hatred for the Lakers

Price is a better defender all around than Telfair, not only because he's a tad bigger - but he has great speed and persistent energy. He's a fly, constantly bothering those he defends, and he's got enough vertical ability and lateral speed that his contests, challenges and blocking ability are legitimate and not just motions which the offensive player can comfortably ignore. 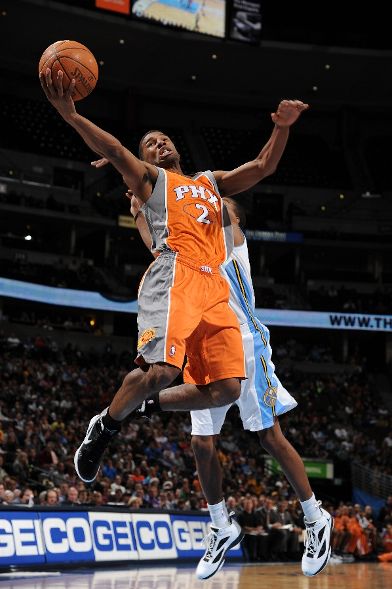 Former teammate Deron Williams had this to say about Price,

"He's one of those guys who can be ready no matter what. And that's what you've got to love about him," teammates Deron Williams said. "No matter if he plays two minutes or if he plays 20 minutes, he's gonna be ready to play every night." - Deseret News

At this point in the preseason - it sounds as if Ronnie has beaten out Bassy for the #1 back-up spot. I know I said I wouldn't let the scrimmage or the first preseason game weigh much on these reviews, but the Suns coaching staff is indeed factoring in these two games. And if Paul Coro is as good as reading minds as I truly believe he is, there is absolute truth to this.

Remember a few things. First of all Alvin Gentry has proven that he is a coach who will undoubtedly use his bench. He's also a coach who notices effort and performance. If Price is deemed the #1 back-up now, he'll be that until Telfair can show that he deserves it, and if that's the case, he'll earn it. There will not, or should not be a Vince Carter pity rule for these point guards. Meaning one won't earn minutes simply because he's been an All-star a bijillion times or because he won the dunk competition or because your owner is paying him 17.7 Million dollars to suck buffalo wings and tap butts and high-fives to the opposing team... HAVE FUN DALLAS!!! HAHAHAHA MUAHHAHAHA [Maniacal Laugh]

But seriously - I believe Gentry will use both Telfair and Price a lot, maybe even more so because of the aforementioned Nash health concerns and the shortened season. He'll match them according to the opponent - and Gentry himself will get better at that matchmaking as he continues to learn how both players play their game.

My big question is the same question we had for Goran Dragic.. and for Aaron Brooks... and for any point guard who ever tried to back-up Nash - Will Steve Nash cause them to change their forte's(strengths)?

Will Price and Telfair play to their strengths or will they try to reinvent their wheels because of Steve Nash?

Brooks tried to last year and stunk. Dragic constantly had trouble 'trying too much to be like Steve' - though in our most recent WCF run Dragic put an exclamation point on his own style of play and it helped (along with Dudley and the other bench mobbers) the 2nd unit really create it's own unique identity. That translated to success. Is it the awe of how smooth and great he is that just hypnotizes his back-ups to emulate him and fail? Is it something they just do subconsciously because Nash unknowingly has super telepathic mind-controlling influence? I'll stop there... it's a mystery though indeed.

I implore you all to have great patience with both Telfair and Price. NO ONE will be Steve Nash - there will always be a drop of play when Nash leaves the game. He's the greatest point guard alive. Give these two a chance and have an understanding heart - they are new to this team, to these players, to this style, to this culture - be grateful that we have REAL depth at the point guard position for the first time in a long time. It's not necessarily a bad dilemma to have if we're concerned about whether it will be Ronnie Price or Sebastian Telfair that comes in to relieve Steve Nash.