I am not going to pretend to fully understand the power of The Force...or of the Star Wars movie franchise for that matter.

I do vividly remember standing in line in 1976 to see the original Star Wars at the old Cine Capri in Phoenix. It was hot. I was six. The movie was AWESOME.

I have no memory of when I saw Empire Strikes Back for the first time but you better believe I had plenty of action figures and my own Luke Skywalker laser pistol. In fact, I do remember being at my friend Harry's house playing Star Wars when we got the news that Elvis died. We didn't cry.

I absolutely remember riding my bike to the brand new Westridge Mall to see Return of the Jedi in 1983. I was 13 and rode the shit out of my bike which had over-sized saddle baskets for my paper route. I used my paper route money to buy Dungeons and Dragons stuff and Lego's. I was a geek.

Those three Star Wars movies were a big part of my childhood and yet, I didn't turn out to be a Star Wars fanatic like many of you who are much younger than me. Perhaps I don't have the right amount of midichlorians in my blood (geek cred!).

For those of you who are in fact Star Wars geeks and also Suns fans (of course you are), the folks at the Phoenix Suns have put together a very special night just for you. 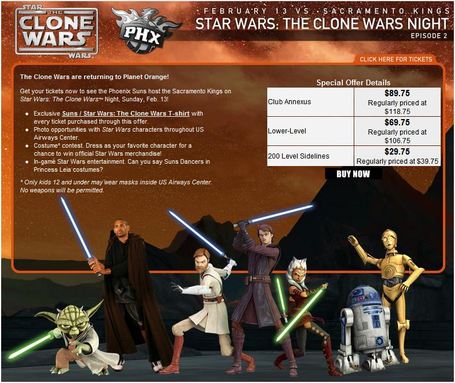 Note: One thing that you might not be able to read in that fine print that I want to make sure no one missed...

And as a special treat -- thanks to our friends at Suns.com -- we are giving away a Phoenix Suns Star Wars T-shirt to one lucky Bright Side of the Sun reader.

All you have to do to win this T-shirt is post a picture of you and/or your Star Wars stuff on our Facebook page.

The winner will be selected by me based on which picture I like the best (which is say it is completely arbitrary). I will then fire the T-shirt at the winner's home using a T-Shirt cannon designed by Imperial Forces to destroy entire planets. Or I might just mail it to you. This is open to all you, regardless of which planet you live on.