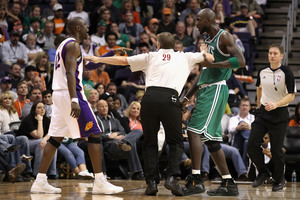 I hate these guys. They're mean, green fighting machines and they're good, really good. They currently hold the #1 seed in the Eastern Conference and the 2nd best record overall at 43-15. Yet, the record that scares me the most is 25-5 at home. The lucky teams were the Lakers, Thunder, Mavericks, Hornets and Rockets. Their biggest defeats suffered at home were to the Rockets 108-102 and the Lakers 92-86. Yup, only 6 points. Dallas and the Thunder won by 5 while the Hornets won by 2. As for the Suns. They're 1-10 on the road when they score fewer than100 points. Knowing how the Celtics play defensively, this game is scary.

Get the picture? No? Well, I guess what I'm really trying to say is that a win tonight would be improbable, unlikely, just ain't gana happen. Especially, considering the beat-down these Suns gave them on their official and seasonal, "Turn-around" date, January 28th. 11-3 since then, by the way. I know the Celtics remember that night and I'm sure you also remember that night very well besides the fact that it's become a Phoenix Suns holiday(should be). In short, Suns whooped Celtics, Celtics cried, KG threw a tantrum and hit Channing Frye in his "no, no special place", Suns win 88-71. In fact, I've got the video right here. Just hit the jump.

Yea, they're punks. Well, at least KG. I hope this footage with the mention of Bruce Bowen and the awful commentary and opinions of Mark Jackson have got you pumped up for this game because we'll need all the energy we can get. Yes, we fans need energy too. It's not always easy rooting for a basketball team, especially one that wins a game by one fraction of a second after giving up a 7-point lead in the last minute of the 4rth quarter. It can be exhausting. I don't know about you, but most Suns games I watch give me a lot of rush and anxiety that usually result in crashes, heart-break and in some cases, hangovers and I don't even drink!

Lets talk a bit more about these Celtics. They're very good, they play great defense( which we already know). Perkins got traded, Troy Murphy got signed, Ray Allen can shoot, Rajon Rondo can't, they've won their last two games, and KG is a punk, but did you know that Rondo is averaging 12.1apg? WHOOPDY FREAKIN DOO!

Seriously though, the Celtics are a Championship team. We know what they've done, what they'll do and what they can and usually do do and you know what that is. It's going to take a very, very good night from the Suns and a bit of an off night for the Celtics if Phoenix is to win this game. If you don't remember how the Suns won their last game against these guys, just check out the box score link below(January 28th). For those rebels that don't want to click the link, Gortat played like a monster and the Celtics shot 34% from the field court.

Now, I know I've said a win is unlikely, which it is, but did you know that the Suns have won 3 straight vs the Celtics? Did you know that they and the Magic are the only teams to have a winning record against them since 2007? 4-3 in fact(for the Suns). I bet you didn't. See, there is hope. The Suns are also on a 4 game winning steak, so you got that whole momentum thing going on; hope it caries over. They also have Steve Nash, Grant Hill, Channing Frye and Jared Dudley. In other words, they're awesome and they'll fight to the bitter end, so enjoy the game guys!

Here's some interesting links that may interest you-

Makers of the Big Shot

Vince Carter isn't healthy. He's hurting out there and on most nights isn't producing. Should we sit him and give those minutes to healthier players?