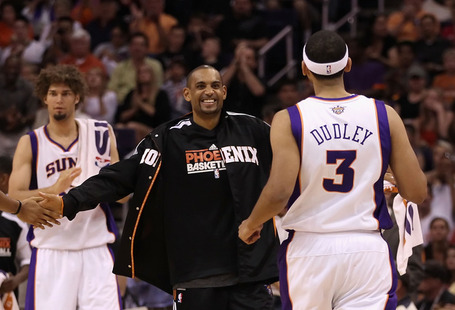 We all know the Lakers (50-20) are a very good team; they're the defending champs and have been for the past two years. The Suns on the other hand are nothing more than a mediocre (35-33) team trying to make the playoffs. Unfortunately for them, these Lakers stand in their way.

They've won 12 of their last 13 games with their lone loss coming to the Miami Heat. Now before any of you pessimists start counting this one as a loss you should know that the 2010-11 Phoenix Suns have actually put up quite a fight vs. this squad. Yes, the Lakers won 2 out of the 3 winning both games in Phoenix, but the Suns have given them fits taking each game down to the wire.

Yea, I wouldn't be surprised if LA blew them out of the building, but it's not what I'm expecting tonight. Phoenix is more than capable of holding their own against them and I expect a tough battle down to the last second with the Suns celebrating a win.

This is the test, this is where things get hard (harder actually). Only five of the final fourteen games are against below average teams: Raptors, Clippers, Kings and Timberwolves (twice). The other nine are vs. the Mavericks (twice), Spurs (twice), Hornets (twice), Thunder, Bulls and of course it all starts with the Lakers tonight. Obviously, the Suns have to win some games they aren't suppose to if they're to make the playoffs.

With that said, from here on out I don't want to hear any complaints, any excuses because it's only going to get harder (you thought I was going to say worse, huh?). Winning is the only option we have. So what do you say, aye? They took two games in our arena, how about we take two game in theirs? I say, lets get even!

Any lineup with Kobe Bryant is a good lineup even if it's just him. He's more than capable of playing 1 vs. 5. I'm sure we all remember how he "nearly" beat the Suns back in the 06 playoffs? Andrew Bynum will be out tonight due to a 2 game suspension, so that means Odom comes off the bench pushing Gasol to center. Now that Nash is healthy he should be able to tear Fisher apart with ease. Grant Hill will have his hands full guarding Kobe. Carter will likely guard Artest with Channing on Odom.

Brooks will be back after serving a 1 game suspension for throwing a ball at a ref. He's been known as a "Laker Killer". For someone looking to earn his stripes this would be a good opportunity for him to live up to that title.

Pietrus has been known as a defensive stopper and has even guarded Kobe in the finals. I'm sure he'll get a chance to do that again tonight. I expect to see Marcin Gortat on Gasol. That should be an exciting matchup.

Individually, the Suns players off the bench are good, but as a unit not so much. The Lakers only go about 9 men deep, 8 tonight. Blake and Brown have been known to kill the Suns in the past, so they'll have to watch out for those guys and not let them have above average games.

Advantage: With Odom having to start the advantage should go to the Suns.

Wow, the Suns may actually have the best bench warmers in the league! That's something, right? Dowdell and Siler have shown flashes and Chill can actually play.

Advantage: Suns win this one easily due to Siler's eyes.

Which was your favorite team?