Let's get one thing straight, the Phoenix Suns - they are #Winning!

Despite a good, bad, and ugly loss all wrapped in Tuesday's game against the vengeful Boston Celtics, the Phoenix Suns are in Milwaukee to play the Bucks riding a well timed surge.  The Suns are 4-1 (.800) since the All-Star break, 11-4 (.733) in their last 15 games, they have won 5 of their last 6 road games,  and they have won 7 of their last 10 games against teams with winning records.

Tuesday's loss in Boston was 'good' because of what the bench accomplished for the 2nd time in two games.  They carried the team when the starters were playing horribly and are really starting to develop a unique identity much like our bench squad of last year did after the All-Star break.  Aaron Brooks dropped a team high 17 and added 7 assists while Jared Dudley dropped 15 and was everywhere, Marcin Gortat had 13 and 13 for yet another double-double and the bench championed an 18-0 run that forced the Boston starters back into the game...But the 'bad' part was that the same 18-0 run was nullified by a deficit that started at 11 points after the first quarter - jumped to 20 at the half - and peaked at 29 at one point in the 3rd.  It was too little too late.  The 'ugly' came in the form of the Boston players on the floor and the Boston head coach in the post game interviews.  It was Kevin Garnett openly jawing at Alvin Gentry and the Suns bench in the final seconds of the game (and receiving a technical foul for it), it was Paul Pierce blatantly mocking Channing Frye after a fast break dunk (and receiving a technical foul for it), and it was Rajon Rondo disrespectfully shooting a 3-point shot with a 10-point lead as time was expiring (and getting fouled hard by Jared Dudley for it).

Did we really expect a win?  If you were slightly delusional like me and sort of did expect a win... you need to sober up like I have.  How did I sober up you ask?  I closed my eyes and made is so with the power of my mind.

But maybe I still am under the influence, because after the game I saw something akin to a fire burning in an ice-cavern, a light shinning from a veil of darkness, a lamb laying with a lion - it was this positive Tweet from our own Scott Howard.

I basked for a moment in the glory of such a positive take-away considering the source - and then I realized I am on a drug.  It's called Eutychus. It's not available, because if you try it once, you will die and your children will weep over your exploded body. Too much?  Jump it then fools and lets talk about the Bucks.

*I'm assuming VC will start - though he did look as though he might have suffered a stroke and/or a stage-mach-5 concussion after colliding with Channing Frye on Tuesday and receiving a 'mouth laceration'...  so we'll see.

Actually - team physician's assistant (not really) Grant Hill tweeted last night an encouraging status report on Channing Frye and his recovery from the collision with Carter,

Attached was this photo - 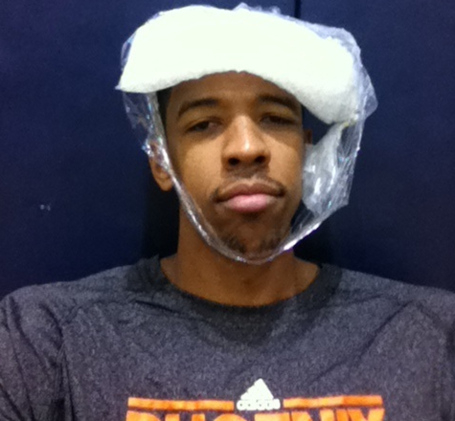 Needless to say... I think he'll be fine. 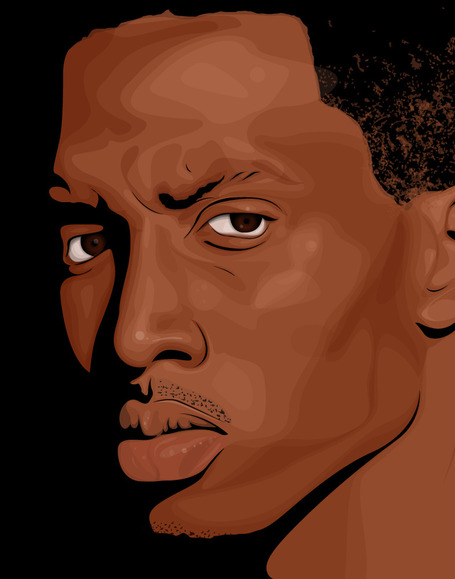 This awesome painting of Brandon Jennings was created by dpwatson aka wattdogg10 - one of our very own staff writers who is an amazing artist and accomplishes his works of art because he has tigers blood and Adonis DNA.  Check out his portfolio and his other masterpieces at his website here.

When it comes to his play - Brandon Jennings is picking up steam after suffering a broken foot that set him back for a large chunk of the season so far.  But now he is healthy - but the typical problem of young players he suffers from is consistency and execution down the stretch in games.  Over the Bucks last 5 games - Jennings has played well against other sub-par teams, posting a 27 point, 7 assist, 3 steal game against the Timberwolves and a 21-4-2 game against the Pistons.  But in games against tougher competition - Jennings is struggling significantly, he made only 2 of 6 and had 3 turnovers against Chicago and went a paltry 1-11 from the field with 4 personal fouls in 27 minutes against the Nuggets.

Steve Nash and the Suns should easily be able to contain Jennings for the second time this season - he went 2 for 10 for 6 points in their first meeting.

The scouting report from my armchair here is simple for this game.  This is one of those should be #winning games.  We know that earlier this year these games were still very scary - and even on this road-trip our wins against the Nets and the Pacers were too close for comfort...  but here's the deal - Andrew Bogut is out, again.

Last time we saw the Bucks - they looked absolutely horrendous offensively (shooting only 31.1%) and we out-rebounded them like a gazillion to none (more like 54-39). We must win the rebounding battle and execute on offense.

I won't say it's absolutely necessary for tonight's game... but our starting unit REALLY needs to start pulling things together again.  For 2 games in a row they have looked drained, tired, and just flat-out bad offensively.

The Bucks are short-handed and struggling - we on the other hand are healthy and rolling.  Especially our bench.

BENCH MOB IS BACK

Is it premature to say that the bench is back?  That it has developed it's own identity and poses just as much of threat as our starting unit?  If you look at our bench production since the All-Star break I can say that with confidence.

Already on the season our bench was producing good numbers... but since the break?  WOW.

Before the break the bench's scoring average = 39.2

That's all folks - let's get this win and enjoy a capstone game in OKC before our boys come back to the desert.  We've got to finish up this already successful road-trip strong with a couple of wins.