The other day I spent a few minutes talking to Suns rookie Gani Lawal in the locker room before a game. Gani, you will recall, was drafted 46th by the Suns last summer. The 6-9 forward tore his ACL and partially tore the MCL in his right knee and missed the second half of the season. The injury occurred on the practice court in early January and as is typically the case, they waited a few weeks before cutting him open to repair the damage.

Gani was in a great mood when we spoke. He ran on the treadmill that day for the first time and seemed really jazzed about that. He said his knee is about a month ahead of schedule and he'll be staying in Phoenix to work on his rehab until the lock out which is expected to start on July 1.

Gani said he expects to be 100 percent by July or early August and is dying to play. He's bulked up a bit and looks ripped (shoulders and arms). His plan for next season is to bang in the paint, rebound, run the floor and bring energy -- same plan as before.

He is going to enroll in some classes at Georgia Tech in July to work on finishing his degree in business/finance. While he expects it will take at least another year to reach that goal, he's committed to it. Good for him.

Gani only saw two minutes of floor time all season before hurting his knee.

Here's a picture of Gani from Sun's media day before last season...in case you forgot what he looked like. 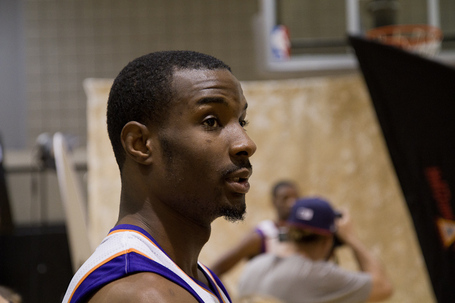