Phoenix Suns Player Evaluation 2010-11: Dudley Not The Answer To The Suns' Problems

Share All sharing options for: Phoenix Suns Player Evaluation 2010-11: Dudley Not The Answer To The Suns' Problems 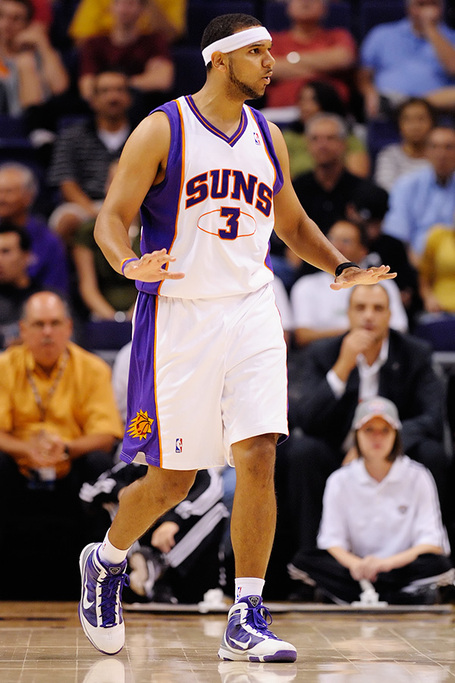 Welcome to the second piece of the 2010-11 Phoenix Suns Player Evaluations. We here at Bright Side of the Sun have assembled somewhat of an All-Star cast of writers to put together alternative views on the players, front office, and coaches. Your favorite and least favorite Suns will no doubt get plenty of attention, and the compliments or criticism they deserve.

There is no question that Jared Dudley is one of the grittiest players on the Phoenix Suns. His desire to win combined with his work ethic and heart makes for a very volatile combination. He is, essentially, the perfect player to plug into almost any system and find success. He has an uncanny knack for where to be on the court, when to gamble on defense and when to step up and take a big shot.

As you all may recall, Dudley found his way inserted into the starting lineup after the Suns' embarrassing loss to the New Orleans Hornets, a game that essentially took the wind out of our sails - and our team out of the playoffs. During those final 11 games of the season, Dudley averaged a healthy 16.0 points per game, all the while chipping in an additional 5.9 rebounds and 2.3 assists per game. Pretty solid numbers for a starter, if you ask me.

While that's all well and fine, it is the circumstances surrounding Dudley putting up these robust numbers that have me concerned.

I consider the March 27th loss to the New Orleans Hornets a turning point in the Suns' lost season. It was the point where we were still (technically) in the playoff hunt, with the Hornets being one of the teams we could easily gain ground on. Instead, we let Emeka Okafor and Chris Paul steal the show, while a myriad of Suns players - including Steve Nash - failed to show up.

One of my main knocks against some players is that on bad teams, they can put up good numbers. Take a look at players like Ramon Sessions and Daniel Gibson of the Cavaliers. They both put up career years in the midst of the Cavaliers' record-breaking losing season. Why? Because the team was simply that bad. Now, the Suns are not even close to the epic failure of the Cavaliers, but the idea is still the same: when the games matter, what are the players' roles?

Jared Dudley is one of my favorite players on this team. I was a bit skeptical that once the Suns offered Dudley his contract, that he would take the approach many players would and simply tread water and earn a paycheck. Looking back, I couldn't have been more naïve. Dudley made his reputation as a player in this league based on his hard work and his intense drive to be better. There was really no question that Dudley would come in with another added weapon to his game (his one-step pull up jumper) and intensity that would set the bar for the rest of the team.

Yet, while Dudley has again expanded his game, he is not a player that should be starting on a playoff contending team.

While I will agree that Jared Dudley has a better skill set and understanding of the game than the aforementioned Ramon Sessions and Daniel Gibson, my point remains the same. Jared Dudley is, at best, a fantastic bench player who can put your team over the top. We saw it when the cornrow-rocking Dudley worked his way into the fans' hearts in nearly the instant he stepped on the floor. We saw it in the Suns' magical run to the Western Conference Finals.

This is not a knock on Jared Dudley. Many players would kill for the chance to start in this league, and there are few players more deserving than Dudley. However, this league is about winning. Certain personnel decisions must be made dependent upon the status of the team. During the last 11 games of the season, Dudley was our starting shooting guard, and he did it well. But it was because of the status of the team that he was afforded that chance.

Dudley may very well be our starting shooting guard come next season, and with good reason. He showed he was willing and able to step into the role Vince Carter was physically and mentally incapable of filling. Still, Jared Dudley's role on the court is the same.

He has proven that he can be a quality starter on an underachieving team or the heart and soul of a championship contender's bench. If the Suns can regain their status as one of the top teams in the league next season, expect Dudley to return to his bench duties. However, if the Suns continue to struggle, Jared Dudley is our man at the two-spot.

I recall one of the national media pundits explaining something to the effect that if Jared Dudley is the top scorer on your team, your team probably isn't very good. With the future of the Suns franchise in a constant state of flux, a do-it-all player like Dudley is a perfect fit. Nevertheless, while a player of Dudley's caliber is a fantastic thing to have, it does not mean that the Junk Yard Dog is the answer to all the Suns' problems.