Phoenix Suns Player Evaluations 2010-11: Hakim Not Quite A Dream, But Still A Valuable Player

Share All sharing options for: Phoenix Suns Player Evaluations 2010-11: Hakim Not Quite A Dream, But Still A Valuable Player 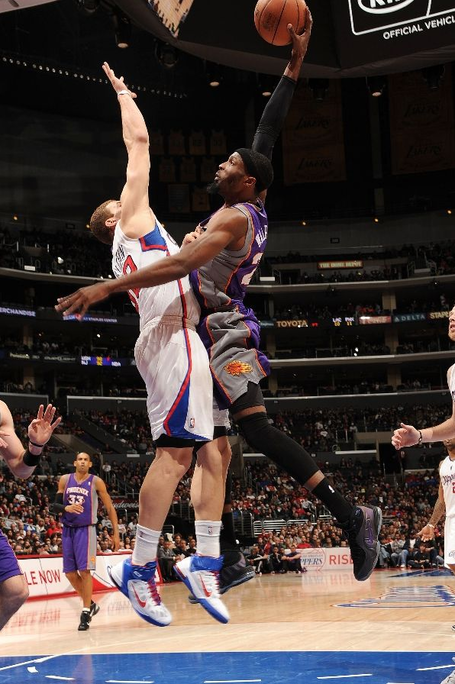 Welcome to the fifth piece of the 2010-11 Phoenix Suns Player Evaluations. We here at Bright Side of the Sun have assembled somewhat of an All-Star cast of writers to put together alternative views on the players, front office, and coaches. Your favorite and least favorite Suns will no doubt get plenty of attention, and the compliments or criticism they deserve.

In June 2010, the Phoenix Suns were fresh off a miraculous and unpredicted run to the Western Conference Finals. On the strength of Amar'e Stoudemire, the creativity of a healthy Steve Nash, and one of the best bench units I've witnessed in years, the Suns appeared to have it all. Except the right asking price for Amar'e Stoudemire.

In the wake of Stoudemire's departure, the Phoenix Suns desperately pieced together a myriad of players of varying styles of play and prayed for the best. Those players were Hedo Turkoglu, Josh Childress, and last but not least, Hakim Warrick.

There were many that thought Hakim could step into an Amar'e-lite role as Nash's roll man, myself included. His history as a dunker (and not much else) preceded him, so expectations weren't too high. No one expected Warrick to be Amar'e. A few expected him to be a bit better than he was, but as the season progressed, Warrick found himself settling into a nice spot on this Phoenix Suns team.

Some may clamor about his lack of defense and others may whine about his inconsistency. Yet, through all the ups and thunderous downs we've experienced, Hakim has been just what we've needed him to be. Well, almost.

Hakim Warrick has undoubtedly been one of the bigger question marks of the past season. In the first third of the season, Warrick saw consistent minutes as Robin Lopez (again) healed from injury. During a 4-game stretch in one of the closing weeks of November, Hakim averaged 17.3 points and 5.3 rebounds. He also made his way to the free throw line an average of 9.3 times per game, knocking down 83.8% percent of his free tosses. This stellar week of play earned him a spot in the starting lineup against the Denver Nuggets.

The result, however, was disastrous. Shooting just 25% from the field, Hakim managed just 8 points, 9 rebounds and 2 assists. The game was just as ugly as Warrick's trip to the starting lineup, too. The Nuggets out-throttled the Suns in what was one of the worst defensive performances all season, with Denver winning 138-133.

Warrick then returned to the bench, where we all knew he belonged in the first place. This was partly to do with his failure as a starter, but more because playing on the bench caters to his strengths more than playing with the starting unit. Warrick, at his best, is an above average finisher with exceptional athletic ability. His rebounding mechanics are decent, but his mindset is almost never completely focused on chasing down loose balls.

While Warrick certainly has his limitations, he is just what the Suns need on their bench to get back to their volatile bench form of yesteryear. Hakim can come into games and, as we have witnessed on multiple occasions, get opposing bigs into foul trouble by getting to the free throw line. He tends to play better against weaker competition, as the larger, wider bodies of the starting units give him trouble. He also began developing his midrange jumper as the season progressed. While the shot is goofy and looks extremely unnatural, it began to find the bottom of the net with more frequency.

On top of the weaknesses of other teams that Warrick has become surprisingly good at exploiting, he is currently signed to a very reasonable contract. He will be making a modest $13.92 million over the next three seasons. Compared to other bigs in the league that received contracts last summer, Warrick is looking more and more like a steal. Amir Johnson, Linas Kleiza, Darko Milicic and Tyrus Thomas, among others, are all players making more money than Warrick who produced similarly or worse than Warrick.

If Warrick can continue to develop his game with the bench unit, there's no telling what his value to the team can be. It was the inconsistency of the big men of this team that led Warrick to the predicament he's in now. Without a star power forward, the Suns were looking for the best player to step in and be the player they needed. Unfortunately, the Suns never found that player, which led to a irregular rotations and shifting lineups.

Once the Suns find the big man they can consistently stick in the starting lineup alongside Gortat, Warrick's play will improve. Until then, we Suns fans must have patience with Hakim Warrick. He may not be our dream player, but he has shown the willingness to work on his weaknesses. If he can continue working on his rebounding, defense, and overall game, he could become a very solid option off the bench.

Warrick showed flashes of the player he could be for this team in various stretches during the season, and the Suns would be foolish to give up on a player that could become a valuable asset down the line. Plus, who wants to lose this?