Phoenix Suns Player Evaluations 2010-11, Coach Edition: Is Alvin Gentry A Solid Coach Or One And Done?

Share All sharing options for: Phoenix Suns Player Evaluations 2010-11, Coach Edition: Is Alvin Gentry A Solid Coach Or One And Done? 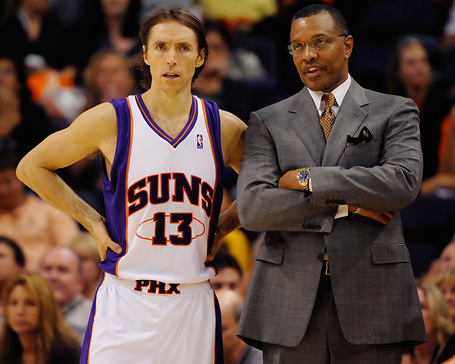 Welcome to the Head Coach Edition of the 2010-11 Phoenix Suns Player Evaluations. We here at Bright Side of the Sun have assembled a cast of writers to put together alternative views and biased views and amazing views on the players, front office, and head coach. Your favorite and least favorite Suns will no doubt get plenty of attention, and the compliments or criticism they deserve.

In the world of sports, as your team goes, so does the general public opinion of its head coach. For the Phoenix Suns, the situation is a bit more complicated. Going from the Western Conference Finals and being one fateful putback away from potentially becoming an NBA Finalist to missing the playoffs altogether has the fanbase a bit perplexed. Was the team really that dependent upon Amar'e Stoudemire? Was Alvin Gentry the beneficiary of a team that played above its collective head? Was last season's success merely an aberration?

While the answer to the first question is a resounding "yes" - the jury is still out on our beloved head coach. Alvin Gentry has repeatedly shown that he has the tools to make his mark in this league as a head coach, but he comes with his flaws. He has shown an incredible ability to draw up plays coming out of timeouts, but makes confusing decisions when it comes to his rotations. Maybe it's all part of the bigger plan and maybe the lineups he rolled out there were really the best this team had to offer.

Fans are willing to give a pass on some things while the team is winning, but are more inclined to criticism when the team is losing. In a season where your team is underperforming (especially compared to last season), all the coach's moves are going to be put under a microscope. So, fans, after putting him under your microscope, is Alvin Gentry the real deal or is he a one hit wonder?

In a season where your team falls from being the third seeded team in a competitive Western Conference to the tenth place team with aging stars, one of them having the post supernova style of play*, there are going to be question marks. Part of the job description of being a head coach is to answer these questions to the masses, be it by interview or postgame press conference.

Unfortunately for Alvin Gentry, these two mediums did not prove to give us fans the insight we needed.

All season long, Gentry was preaching patience. He noted that it would take some time for the newly acquired Hedo Turkoglu, Josh Childress and Hakim Warrick to really gel with the team. However, when the anticipated "few weeks" turned into a "few months," Hedo and Jason Richardson were shipped out for a merry band of Magic men - and the Suns were left with more players to try and integrate midseason.

Then, the past repeated itself: after a disappointing follow up to his breakout playoff performances, Goran Dragic was shipped out for the disgruntled Aaron Brooks. Again - it was another player Gentry had to try and figure out how to use in the middle of a season, while the team was desperately clinging to the hopes of the playoffs.

It's only natural to want to believe in something when a disappointing season is had. When looking back at the season, it's easy to sit back and think, "Wow, Gentry had a lot on his plate. He did the best he could." (I believe that he did, but we'll get to that later.)

While Gentry may get the sympathy vote from the peanut gallery, there were times in this season that had everyone scratching their head. After the Suns were officially eliminated from the playoffs, Gentry released the players he previously had nailed to the bench. Josh Childress was the main beneficiary of this, and he played his heart out. Gathering loose balls, nearly touching the ball on every possession from sheer effort, it was unclear how Alvin Gentry could not find a spot for his energy when players like Vince Carter weren't giving us any.

Gentry, from my perspective, is also a coach that enjoys consistency. Unlike the Don Nelsons of the world, Alvin Gentry likes to stick with the same starting lineup, regardless of their struggles. This mentality worked last season, where after a few rough months, the starting lineup started clicking and the Suns surged to the third seed in the playoffs. This season, however, had a different effect.

Vince Carter seemed to be stuck in the starting lineup by formality only. Robin Lopez was relieved of his duties on a nightly basis after a few, usually unproductive minutes, by Marcin Gortat. Gentry repeatedly told us that it doesn't matter who starts the game, but who can give the most productive minutes. This theory may work in principle, but after your starters are unable to give the production needed, the bench must exert more energy in the first half, leaving less energy and productivity late in the game.

However, while we can break down Alvin Gentry's rotations and personnel decisions all night long, the fact of the matter is that he was dealt a constantly changing hand and did the best he could with it. There might be some lapses in judgment and mistakes made, but no coach is perfect. Even the almighty Phil Jackson made mistakes, but his mistakes were generally able to be covered by his star players.

Everyone is human. The game of basketball is such an evolving sport that no two games will be the same, even between the same teams. Not every rotational decision will work, and not every player will be productive every night. The part that goes overlooked of being a head coach is being able to make these decisions on the fly. Sometimes they work, sometimes they don't.

I'm not saying something vague, like "Alvin Gentry deserves, at the very least, a pass because of the ever-changing and unpredictable nature of the game of basketball." I'm not even saying you need to give the man any praise at all. My theory, however, is that in a world of constantly changing lineups, front offices and coaches, it would be nice to have a little consistency.

In his first full season as head coach, Alvin Gentry showed that he can lead a team to surprising heights. He has proven to be good with the media, another admirable trait. On top of that, in all accounts I've read, the players enjoy playing for him. He may not be perfect, but he is our head coach. Much like the Arizona Cardinals didn't give up on Ken Whisenhunt after last year's dismal campaign, the Suns should not give up on Alvin Gentry.

* Yes, this player is Vince Carter. According to Wikipedia: "After the core of an aging massive star ceases generating energy from nuclear fusion, it may undergo sudden gravitational collapse into a neutron star or black hole, releasing gravitational potential energy that heats and expels the star's outer layers."