Welcome to the sixth piece of the 2010-11 Phoenix Suns Player Evaluations. We here at Bright Side of the Sun have assembled somewhat of an All-Star cast of writers to put together alternative views on the players, front office, and coaches. Your favorite and least favorite Suns will no doubt get plenty of attention, and the compliments or criticism they deserve.
You guys are like my family. We laugh together, we fight, we celebrate, we share good times and bad times and sometimes we all have to get away from each other and take a short break... but you and I, we always come back. Being such a tight nitted family of fanatics and sports perusers alike that we are - I will hold back no secrets...
My favorite number is 12.
So by default - I have to root for and support any Suns player sporting the number 12. This time around the number is dressed neatly on the back of one lovable, huggable, easy to love - easy to hate French crepe named Mickael Pietrus.
Join me (or bear with me) as we take a short look at the short season that 'Peaches' had with the Suns after being traded along with Vince Carter and Marcin Gortat mid-season for Jason Richardson, Hedo Turkoglu and the enigmatic Earl Clark.

The Elephant in the Room

Let's get this out of the way first. As things go round in the NBA as a business - Mickael Pietrus has a player option for the 2011/12 season. What does that mean? That means the team can't cut him like they will inevitably do with the dead weight that is Vince Carter. In all reality, Pietrus will be back next year as a member of the Phoenix Suns - it would be stupid for him not to pick up his player option especially after such a personally unspectacular year playing ball. In fact - I have it on authority from one of my good sources... that Pietrus will do just that.

Now I know there are a whole slew of folks ready to jump on my boy Pietrus... Towards the end of the year his inability to curb his emotion in certain (and limited) situations somehow earned him a spot in Alvin Gentry's dog house - that, coupled with a possibly significant quadricep tendon-strain injury knocked Pietrus out of the rotation and landed him a soft-chair seat on the bench for the remainder of the season.

So I know you all have been avidly following these player evaluation pieces, so when I reference them they should be fresh in your minds. You remember the two pro and con peices on Josh Childress? Yeah, both of them agreed that Josh Childress didn't quite play enough time last season to be adequately evaluated and that his ultimate judgement should be taken with a grain of salt.

Well guess what. Josh Childress played a total of 894 minutes last year for the Suns. Peitrus? A whopping 689 minutes.

Can you honestly say that we can fairly evaluate what Pietrus can do for this team? Especially since he was traded for the first time in his career... and mid-season no-less? I like what Pietrus had to say about that when the Suns season was regretfully over,

"I like it here," Pietrus said. "It was just different for me. I had to adjust during a short period of time. I'd never been traded. Training camp will help so the coaches can get to know me as a player, and I can get to know my teammates. It's not easy to get to know a player when you're chasing the eighth (playoff) spot. Next season, I'll have time to be part of the family."

If we're going to give Josh Childress the slack of a 'wait and see' judgement I think Pietrus deserves one even more for the fact that he wasn't here for training camp and especially since just like Childress, Pietrus was a key impact player for us at times when he did see the court for playing time.

Pietrus? Yeah he can defend. He's got long arms. He can elevate and block shots.

He can elevate and absolutely disturb shots.

He can get in your face and get physical. 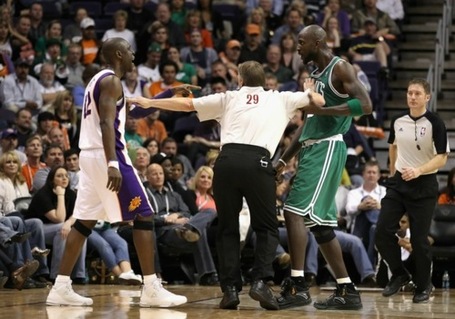 He can drain threes.. and brick them sometimes. He can dunk. He can fast-break. He can post-up. He can cut and slash.

The fact is - Pietrus is an energy player whose consistency is absolutely variable. That's the downside - but guess what? With Jared Dudley making the move to possibly locking up a starting position, the bench needs a player who can come in and impact the game right away with hustle defense and heart stabbing three's. I think Pietrus can be that guy.

Did he have an off year? I think he absolutely did - he was traded mid-season, shot under 40% from the field for the first time in his career, never completely learned the Suns Offense or Defense and then got injured right when he was starting to see consistent minutes. It was an off year indeed.

I'm giving Mickael Pietrus a school grade of an Incomplete. I want to see what Pietrus can do with a full training camp under his belt and with a defined role coming off the bench. Maybe it frustrates a lot of us when he's jacking up rediculous fade-away threes... but guess what, that's what he does and sometimes he can't miss (Hombre en Fuego), and other-times he can't hit even the rim. But that's what you get when you have a streaky role player who can impact the game, either he's on and he's all over the place defending and making shots - or he's all over the place taking poor shots and getting down on himself defensively. That's what winning team's need - impact players coming off the bench.

Plus - he's one of the funniest guys the Suns have ever had come through the organization. I may have extrememly disliked Boris Diaw for his flaws - but I'm willing to give this Frenchman a chance. Will you?