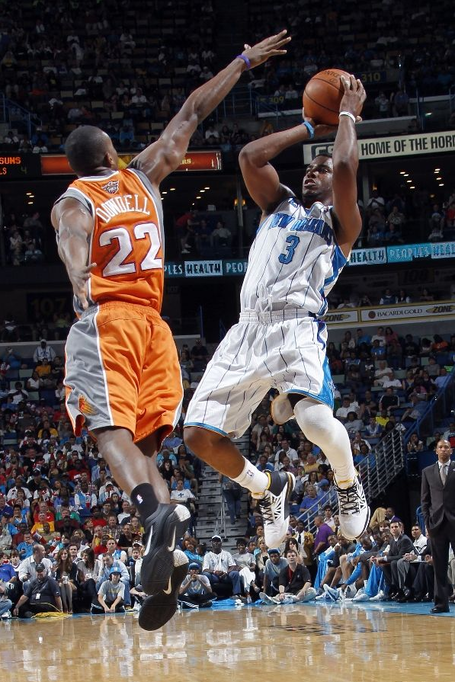 Welcome to the seventh piece of the 2010-11 Phoenix Suns Player Evaluations. We here at Bright Side of the Sun have assembled somewhat of an All-Star cast of writers to put together alternative views on the players, front office, and coaches. Your favorite and least favorite Suns will no doubt get plenty of attention, and the compliments or criticism they deserve.
On the last day of his second ten-day contract with the Phoenix Suns, reserve point guard Zabian Dowdell was called into the film room at US Airways center to meet with Suns executives Lon Babby and Lance Blanks. Dowdell knew fully well the situation at hand; the Suns either had to sign the young guard for the remainder of the season or let him go.
As you well know, the Suns signed Dowdell for the rest of the season. "I went in there with an open mind, but I smiled," Dowdell said. "I tried to hold it all in, but it was a great moment."

Filling in for the injured Goran Dragic, Dowdell displayed supreme confidence and a defiant "me against the world" attitude. During his two ten-day contracts, part of the appeal of Zabian's game was his willingness and ability to utilize the pick and roll, setting up Hakim Warrick for some nasty dunks on multiple occasions. He also proved to be a less tentative player than Dragic, which helped his cause.

Yet, it wasn't his playmaking that helped the little point guard with the cool name work his way into our hearts. Even while displaying almost a complete lack of ability to create his own offense, it was his defensive mindset that set him apart from the rest of the group.

For years, the Suns have been searching for a backup point guard that can either stretch the lead or simply enter the game and not royally screw things up. Goran Dragic looked like the heir apparent for that role after last season's breakout performances both in the regular and postseason, but his regression during the 2010-11 campaign once again opened up that position. Even after the Suns traded Dragic to the Rockets for three point bomber and scoring connoisseur Aaron Brooks, the debate continued.

Dowdell proved to be a consummate professional when it came to the lack of consistency with his role. He understood that he was an unsigned rookie on a team trying to claw their way into the playoffs. He fully accepted his role as a defender and a playmaker, and played to his strengths. Even with an open shot from 11 feet away, he would look to set up his own teammates because that was simply what he was asked to do.

Now, let's get something out of the way. If Zabian Dowdell intends to continue forward with the Phoenix Suns, he has a laundry list of things he needs to improve on. He must improve upon his less-than-stellar assist to turnover ratio (1.76). He must work on his jump shot to be able to actually hit shots from time to time. He must continue to learn the offensive schemes and system of Alvin Gentry.

However, at times, it felt like the offense flowed better with Zabian in the game as opposed to Aaron Brooks. Brooks knows it, too. I can recall a specific instance where Brooks was starting for an injured Steve Nash, saw Dowdell sitting at the scorer's table ready to check in, and consequently showed more defensive effort than we've ever seen from him.

It was in that very instant that I decided I would rather see Zabian Dowdell see floor time over the clearly more talented Brooks.

Zabian Dowdell is the type of workhorse player that can earn himself a spot on an NBA team simply through dedication and effort. I oftentimes find myself making the comparison between him and former Phoenix Sun Louis Amundson. Both have limited skill sets, but due to their work ethic and willingness to do whatever it takes to try and help the team, they have found themselves a spot in this league.

As for the future of Dowdell, I cannot say what his future with this team will be. The Suns have a lottery pick that may very well be used to select a backup point guard. The team also has some very tradeable assets that could net a backup point man. With a lockout looming and the future of the team in question, Dowdell may very well find himself on the outside looking in.

However, my stance remains steadfast. Given an entire summer to (hopefully) expand his game, Zabian Dowdell should be given a fair shot to become the backup point guard for the 2011-12 season.