Bright Side Draft Preview '11: The Curious Case of Bismack Biyombo

Share All sharing options for: Bright Side Draft Preview '11: The Curious Case of Bismack Biyombo 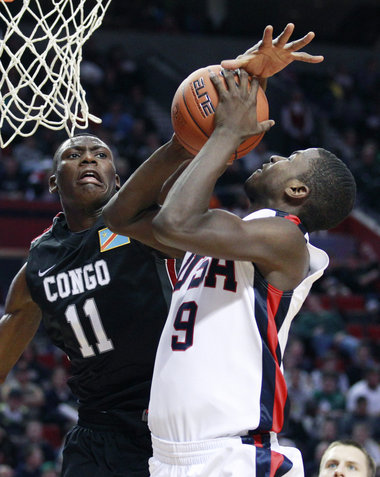 To countdown the days (7 left) until D-Day, your faithful servants here at Bright Side of the Sun will try their best to bring you a wee bit of knowledge about some of the likely candidates to be chosen by the Phoenix Suns. Comment, REC, kill it and continue to be awesome.

Every summer, the NBA Draft brings a bit of hope and intrigue to each NBA team, particularly to those selecting in the lottery. Every summer, NBA hopefuls hire agents, spend weeks flying across the country to work out for teams, and sit and pray their name is called on draft day. And every summer, for a few weeks, the NBA world is buzzing about the overused words "potential," "ceiling" and/or "bust."

However, there is no player in recent memory who has had as much curiosity surrounding himself than the mysterious Congolese player who may or may not be the age he says he is. This player is Bismack Biyombo. He's one of the most physically intriguing players in this draft class due to his immense potential to be one of the league's premier defenders, yet his raw offensive abilities leave teams puzzled.

Read on to learn more about the enigmatic Biyombo.

First off, let's get to know Mr. Bismack Biyombo:

Most sites have Biyombo going anywhere from as high as 8th and as low as 19th. However, in order to prove just how all over the board the internet's opinion of Bismack Biyombo is, here are the spots various mock draft sites have the Congolese player going:

Due to some lackluster workouts in Treviso, Italy, Biyombo's draft stock has suffered a bit. One anonymous GM who was present for to watch the exciting young prospect play stated, "Bismack Biyombo just played a game of one-on-none ... and he lost."

Because of this recent slip in his meteoric rise, Biyombo has decided to come to the States and work out for a few teams, including the New York Knicks and Detroit Pistons, according to Chad Ford's Twitter account.

Biyombo was, once upon a time, the talk of the draft, with a few mock draft sites stating their claims for him going in the top 5, comparing him to fellow countryman Serge Ibaka. However, since the earlier reports, the NBA media world has changed their tune on Biyombo, which is not necessarily a bad thing. After having read multiple interviews with the young player, it is clear that he is not Serge Ibaka 2.0. He's not the next Dikembe Mutombo. He's not the next Michael Olowokandi or Mouhamed Sene.

He is, without a doubt, Bismack Biyombo. A player looking to make a name for himself.

What sets Biyombo apart from the rest of his competition is not his incredible 7'6" wingspan, his triple double in the Nike Hoops Summit last month (where he posted 12 points, 11 rebounds and an astounding 10 blocks), or his meteoric rise to the top. What sets Bismack Biyombo apart from his competition (and his comparisons) is the sheer amount of intelligence the young man possesses.

Jonathan Givony, editor of DraftExpress.com, recently posted a series of tweets about Bismack Biyombo and why teams should think twice about passing on him: 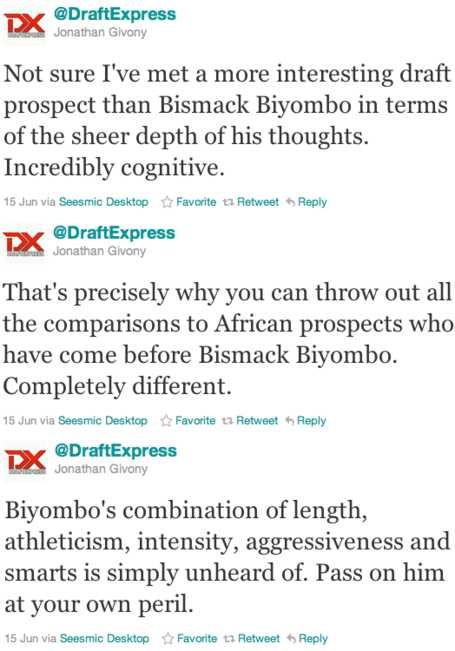 Yet, even more his intelligence and intangibles, if there is anything you need to know about Bismack Biyombo, it is that the 18-year-old is not shy on confidence. He has every intention of leading the NBA in rebounding, blocked shots and being named to All-Defensive teams. The funny thing is, no one is doubting him on those. However, the skepticism following this athletic freak is on the offensive end. Can he develop an Amar'e Stoudemire or Kevin Garnett-like skillset, or will he be destined to the skllls of a Dennis Rodman or Ben Wallace?

There are many questions surrounding Biyombo's name on draft day, but there are certainly some fantastic rewards that could potentially outweigh the risks. It's not very often that a potentially game (and franchise) changing defensive presence becomes available like this, and even less often that teams still aren't sold on the young man's true potential. Where Biyombo lacks in offensive talent, he makes up for in defensive prowess, dedication and heart.

If Bismack Biyombo is available at the number 13 spot in the 2011 NBA Draft, it would be foolish of the Phoenix Suns to pass on the über-athletic Biyombo. If Lance Blanks and Lon Babby are committed to making this team a more defensive unit, Biyombo is the perfect candidate. He might not be able to shoot a lick, but with the right amount of patience and grooming, this young Congolese player may very well be exactly what this franchise needs.