NBA Lockout 2011: What Will it Mean for Next Season's Suns?

Share All sharing options for: NBA Lockout 2011: What Will it Mean for Next Season's Suns? 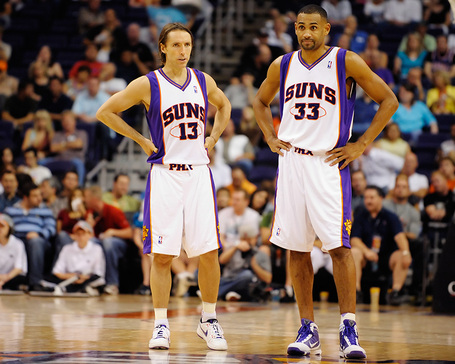 Unsurprisingly, NBA owners and the NBPA failed to reach an agreement on a new CBA this week, and the owners locked the players out. We know what it means in the short-term. No NBA basketball - no summer league, no training camp, and probably only a truncated season following an extremely brief preseason.

The two sides will settle eventually and there will be NBA basketball, as it's doubtful either the players or the owners have the stomach to cancel an entire season. What happens then? How should the missed time impact our performance expectations for current Suns players? Let's look at some likely scenarios after the jump.

For this discussion, assume the roster will stay essentially the same, with no huge trade to shake it up. Sorry to spoil your fun, rosterbators, but "what if" trade scenarios will be a waste of time here. Besides, I hope to show why a major roster shakeup will doooooom the Suns season unless they absolutely rob a team in a lopsided trade. There might be an addition of shooting guard X or power forward Y, but the team remains mostly the same in this exercise.

I'll also assume that the lockout will be roughly the same length as the 1998-1999 NBA lockout, not a happy thought but probably reasonably realistic. That work stoppage lasted from July 1, 1998-January 6, 1999. A 50-game regular season followed a preseason that lasted only 2 games.

Don't expect much change in the league's power structure.

Last season saw the rise of the Bulls, Thunder and Heat, the decline of the Lakers, Celtics and Spurs, and the always-contending Mavericks finally get over the hump. With the lockout freezing rosters and preventing young teams from holding extended training camps, organized team practices, etc, we probably shouldn't expect a similar changing of the guard this year.

Comparisons with the '98-'99 lockout and the amount of change among the ranks of contenders are a bit dicey since '97-'98 was Michael Jordan's last season with the Bulls. They won the title that year, Jordan retired (for the second, but not final time) and the Bulls blew the team to smithereens. So, obviously there was a new champion as the Spurs ascended to the throne the following season. Five of the sixteen playoff teams were different between '97-'98 and '98-'99, which seems like a fairly significant shakeup until we see that those five teams (Sacramento, Detroit, Milwaukee, Philadelphia and Orlando) combined to win only one playoff series.

We can expect to see teams like the Mavs, Thunder, Bulls and Heat continue to rule, but the marginal playoff spots are potentially subject to change. For example, would it surprise you if the Grizzlies fell back to earth due to Zach Randolph getting himself in trouble or getting fat or some such immature move when he'll have six months with no adult supervision?

Team upheaval will not be rewarded.

Remember last year, when we spent the summer wringing our hands over how Alvin Gentry would find the right combinations of players after the loss of Amare Stoudemire and Lou Amundson, and additions of Hedo Turkoglu, Hakim Warrick and Josh Childress? Then, even after a summer league, a full training camp and a full preseason, the Suns rotations sill looked like Gentry decided them based on guidance from a Magic 8-Ball for the first two months of the season until the Jason Richardson/Marcin Gortat trade threw things further into chaos.

Major upheaval this off-season would have been (or still could be) worse, much worse. While the lockout is on, players won't be able to work out in team facilities or have team-supervised practices. Players can work out on their own or in unsupervised groups, but that's not the same. How would new players develop their timing with Steve Nash and integrate with each other overall? Once labor peace is achieved, teams will have a few weeks of practice and preseason and then will be thrust into games that count for real. Do we really want to make a huge trade at the end of the lockout and have the team hastily try to integrate a bunch of new players, with a shortened season that won't allow for extended growing pains? I don't. 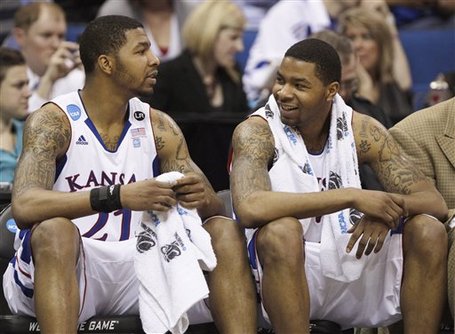 Young players should not be counted on for much.

While newly added players would have a difficult time integrating, young players like Markieff Morris and Gani Lawal figure to have an even harder time. There will be no summer league to allow them to hone their skills against other aspiring young NBA players. Then they'll miss out on the benefit of training camp with their Suns teammates, and preseason, where they would get to try their hand against real NBA competition.

This isn't a hard and fast rule, and '98-'99 had a few rookies who made a big, immediate impact, including Paul Pierce and 1999 Rookie of the Year Vince Carter. But those players were top 10 picks and seen as blue chip prospects. Lower picks who made All-Rookie were Matt Harpring, who had been picked at #15 and Michael Doleac, selected at #12. Can Markieff Morris be our Michael Doleac? That is a question I never thought I'd ask.

There is some good news. Older, established players will rock!

This sounds like a lot of bad news for the Suns, but it actually isn't. NBA players will have extended time without organizational supervision. Are there any other players you'd want as team captains leading a team in such a situation than Steve Nash and Grant Hill? They'll keep themselves in shape, they'll keep an eye out for their teammates, and the Suns have other high character worker types in Marcin Gortat, Jared Dudley and Channing Frye. These guys won't get fat and sloppy over the time off. Other teams' players might.

More important than that, as has been thoroughly discussed, Nash remains the engine of the team. When he was healthy and at his best last year, he was producing as well as ever. If the season is only 50 games or so, there is less chance of Nash breaking down since there will be less wear and tear. Same with our defensive stopper Grant Hill. Older, mature players who take a professional approach to the game will prosper in this situation, and that perfectly describes Nash and Hill.

Team cohesion plus veteran leadership plus better chance for health of our best players should equal a better Suns team next season. We won't be contenders, but could be a frisky lower seed playoff team. Given our current situation, I'd be satisfied with that.