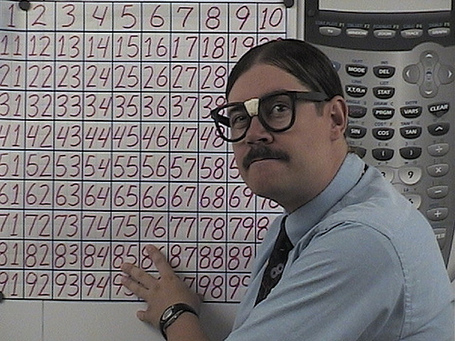 A couple of weeks ago, PHXgp posted this story about best and worst values in the NBA, with Steve Nash featured as an outstanding value and Vince Carter.....eh, not so much. Teamrankings.com recently rated the values of the NBA's highest 30 salaries using their own calculations, and I found this list to be interesting for a few reasons.

First, Nash doesn't appear on the list at all because he's not one of the highest 30 salaries in the league. Have I mentioned before that Nash is underpaid and has been for his entire Phoenix career? OK, maybe once or twice but when I see it called out like this, I still stop and take notice.

The names of former Suns Jason Richardson, Amare Stoudemire and Joe Johnson on the list also beg questions of value.

Follow the jump for the details of what this nerd came up with in his calculations. Does he know what he's talking about? Or does he need to get the hell out of here and take his pocket protector with him?

Looking down the list, we start with superstar players who can be paid just about any amount and it won't be too much: LeBron James, Chris Paul, Dwyane Wade, Dwight Howard. We're talking about dollars per win share here, so best bang for your buck, and those players are obviously producing a lot of wins. Say what you will about LeBron, but $14.5M for him last year was a bargain.

Continuing down the list, we see the usual suspects like Paul Pierce, Dirk Nowitzki and Pau Gasol. Zach Randolph's name at #9 might raise your eyebrows a bit, but not if you saw what he did in the playoffs. It's at #10 that things get a little peculiar. Elton Brand? Really? He's been talked about as having one of the worst contracts in the league, but he provided better "value" than the likes of Kobe Bryant and Tim Duncan last year.

Jason Richardson is rated #12, one spot ahead of Amare Stoudemire. I suppose that, if we're looking at a list of 30 salaries, we can loosely define "good" value as being among the top 15. Notably on the wrong side of that line are Carmelo Anthony at #16 and Kobe Bryant at #17. Bryant's obviously still an outstanding player, but his mammoth $24.8M salary makes it hard to be a good value, while Carmelo Anthony's lower rating can possibly be attributed to his tumultuous season, with rumors of trade and then the trade to the Knicks.

Getting into the 20s, we find our old friend Joe Johnson at #21, to the surprise of nobody since he's been overpaid for years. This has always justified the Suns decision to trade him, in my view. Of course, current Sun (technically, at least) Vince Carter is at #23 so it's not as if we're immune to wasting money.

At the very bottom, we have the injured (Yao Ming, Michael Redd), and the laughably terrible contracts of guys like Gilbert Arenas and Rashard Lewis.

These ratings generally pass the smell test for me and, if the owners have their way and implement a hard salary cap, this sort of player value will become much more important in the league (i.e. the Lakers won't be able to go way over the cap to pay Bryant, Gasol and Bynum). What say you about these ratings? Is there value in their definition of value?