The entire Phoenix Suns team was included in a recent report by Arturo Galletti of The Wages of Wins Journal which lists the value of every NBA player as compared with that player's salary, giving hard-core Suns fans more fodder for their anti-Vince Carter-in-2012 campaigns. Galletti has created - or "remixed" as he calls it - a list of the most over- and under-paid players in the NBA in 2011 by comparing player salaries with both the number of "Wins Produced" by the player and the average value of any given win (taken by dividing the total NBA payroll and dividing it by the number of total wins in a season).

The "Wins Produced" statistic, made by sports economist David Berri (who co-authored the Wages of Wins book) using some fancy math, makes all of this possible. The number of Wins Produced by any given player is simply multiplied by the average win value (around $1.5 million). There are a number of arguments against the Wins Produced statistic, throughout which Berri has defended and deflected quite nicely, but for our purposes as NBA fans it will do very well.

Check the Phoenix Suns' most underpaid and overplayed players for 2011 after thejump! 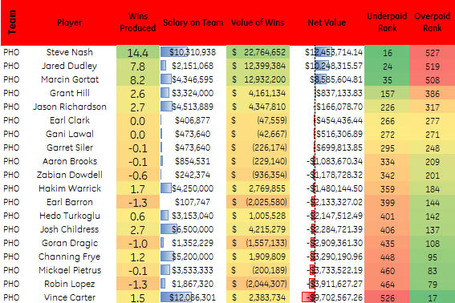 via The Wages of Wins Journal

We're unsurprised: Steve Nash is still the undisputed motor of this team, and for quite a while it has been two very different stories when he is on the court or on the bench (or lounging on the sideline). On the other hand, we're equally unsurprised that Vince Carter, the frustrating enigma that would maybe be served best taking his talents overseas, ends up at the last place spot on our list. Having "produced" less wins than Hakim Warrick, Vince Carter still pulls in the top salary on the team. Jared Dudley, the fan-favorite workhorse, earns his spot on the top of this list.

We're slightly more surprised: Earl Clark, Gani Lawal, Garret Siler, Aaron Brooks, and Zabian Dowdell fill out the center portion of the list in large part due to their relatively small contracts, and the fact that they didn't play enough to cause the Suns to lose or win games overall. But just because they didn't hurt the Suns too much doesn't mean they have greater value than players like Channing Frye and Hakim Warrick, both of whom appear towards the bottom of the list. Perhaps this is where taking into account the number of games played would be an interesting statistical layer to be added.

Overall the cool chart shows us some interesting things about the Suns. Nobody should be surprised to see Nash at the top of the chart, but there are always detractors that say he is on his way down and out. It's also really nice to see young bruisers Marcin Gortat and Jared Dudley rounding out the top three. Those two will likely (hopefully) be Phoenix Suns for many years to come.