Will NBA Owners Attempt to Require Players to Spend Three Years in College Before Joining the NBA?

Share All sharing options for: Will NBA Owners Attempt to Require Players to Spend Three Years in College Before Joining the NBA? 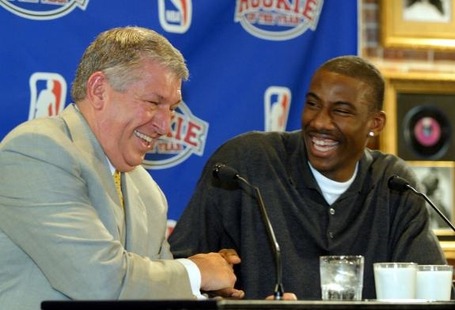 Amare Stoudemire is one of many successful NBA players who played little or no college ball.

Amidst the NBA lockout talk regarding hard caps, basketball related income and the question of whether the owners are accurately representing their profits and losses, the head coach of the Rutgers men's basketball team, MIke Rice, dropped an interesting nugget on Twitter: "I keep hearing NBA owners want to adopt same rule as NFL. Players will have to wait 3 years to enter the draft. Certainly would be interesting." Yes, it certainly would, but would it be fair? Let's dive in to the advantages and disadvantages of this rumored potential rules change after the jump.

NBA and NCAA would benefit

It's easy to see how the rule change would benefit the NBA and NCAA. Essentially forcing players to stay in college longer would be a boon for the NCAA in that they would get to hold their talented players longer, and the NBA wouldn't have to pay players until they were better prepared to contribute. The NBA would also have longer to evaluate players before investing in them.

The NBA has long enjoyed a free of charge, effective, unofficial but de facto farm system in NCAA basketball. Until the influx of international players to the NBA in the last 20 years or so, the NCAA supplied the NBA with virtually all of its players, and still supplies a good percentage of players today. The relationship is a win for the NCAA, too. Their profitable business of college basketball gets a huge talent pool of employees who are paid only in scholarships, and motivated by dreams of future NBA millions.

The current NBA eligibility rule for non-international players is that the player must turn 19 in the calendar year of the draft, and must be one year removed from high school. Even this rule is stricter than it was in the past, when players such as Kevin Garnett, Kobe Bryant and Amare Stoudemire were drafted straight out of high school. But, before that superstar players such as Michael Jordan, Hakeem Olajuwon and Patrick Ewing played three or four years of college ball, and it's hard to deny that college basketball was better then.

In one example, college hoops fans got to see Hakeem Olajuwon dominate like this for three years.

As any college basketball fan can attest, the quality of the game has declined as the most talented players generally stay in college for only as long as they have to before being eligible to get paid for their services. For example, 2011 #1 pick Kyrie Irving played only one year of college ball, as did 2010 #1 pick John Wall and 2008 #1 pick Derrick Rose. 2009 #1 pick Blake Griffin played two years of college ball, which made him a veteran by elite college basketball player standards.

You think that maybe if any or all of those players had still been in college that the most recent NCAA championship game might have been a little more watchable than the 31-119 FG shooting performance we saw between Butler and UConn in April? The popularity of March Madness is still robust, but maybe not for much longer with more championship games featuring 26% FG shooting.

If the NBA attempted to implement such a system, I'd have to assume that it would only apply to American players, and foreign players would be subject to a different set of rules. It would give the NBA another two years to evaluate players before committing a contract to them and it would also force players to get more of their training and apprenticeship in college rather than as paid NBA employees.

So, the NCAA wins in getting to keep players for longer and improving the quality of their cash cow of a business, and the NBA saves in having to spend less on player development. Fans probably win because it would likely improve the quality of both games. What's the problem then, right? Sign me up!

Wouldn't be fair to young players trying to go pro

Not so fast. How is it fair to deny 18 year old adults the ability to ply their trade professionally in the US because of an arbitrary league rule? At 18 years of age, a person can get married, have kids, join the military, vote and buy a house, among other things. The "it's for their own good" argument doesn't fly when we see the other things 18 year olds are allowed to do. It's not about that; it's about the profits of the NBA and their co-dependent partners, the NCAA.

What justification is there to keep young adult players out of the NBA other than enhancing the profitability of two businesses (NBA and NCAA) while denying these men an income, and essentially forcing them to work as unpaid employees of the NCAA for three years? Sure, they could play overseas, but why should they have to do that?

The only way this would be fair is if the NBA beefed up its minor league system, whether that be the NBDL or some other league or leagues, so that players who don't want to go to college or who need to earn money due to their family's finances could get paid to play in a minor league. But the NBA won't do that because their whole point is to drive player development costs out of their system and force players to develop as unpaid players in the NCAA.

Of course, the rumor of this potential rule change is all based on one Tweet from a college coach who few of us have ever heard of. There may be nothing to it. But would it really surprise you if the NBA owners attempted this? Would it be beneficial? Would it be fair?