Share All sharing options for: What the Suns!? Episode 1 - Aaron Brooks Bowls for Charity, Eats Chicken & Waffles then 'Poots'

Normally during this time of the year the anticipation of a new NBA season would be building - we would all be getting geared up to start hearing news about how teams will begin to reunite for informal workouts in preparation for training camps and the preseason. But obviously this year is different. The 'Lockout' is like the plague and it's killed off all anticipation and basketball talk with the exception of Blake Griffin's farts or whether or not Kobe Bryant ever knew or talked about or spoke in an inside-voice to or possibly had the possibility of shaking the hand of some European team owner. Amazing.

But guess what - we're here to help. This is the first edition of a small series of summer reports on each player listed on the Suns roster that I'm calling, "What the Suns!?" We'll talk about what each player is doing or has been doing this summer for their basketball skills, for charity and what they're doing for fun.

FOR BASKETBALL - He's a Free-Agent and before the darkness set in, the Suns extended to him a qualifying offer which doesn't necessarily mean that the Suns are bringing him back - but if you ask him,

"All signs point to me going back to Phoenix," Brooks said. "I had a good time. I like the organization and it's a great city. I would love to continue playing in Phoenix. I would love to stay with this team. This summer, I'm going to get more comfortable with the guys. I want to get to know everyone a little bit better and then hopefully we have a better season than we did last year."
...

"All of the guys there are cool, but it was awkward for me because I've never been in that position," Brooks said. "I've never switched teams in the middle of the season, but they did a good job of making me feel comfortable while I was there. It was just different being thrown into a situation like that."

He's been back and forth between Phoenix and Seattle training - but indeed he spends most of his time in the much cooler Northwest (can you blame him?).

As far as overseas plans? Hoopsworld reports that Brooks is seriously considering playing in China if the lockout breaks into the season. Given his time with the Rockets and playing alongside Yao Ming Aaron has legitimate popularity points in China as well as various business endorsement deals that could weigh positively in his decision to play overseas.

FOR CHARITY - He's been doing some good things out in Seattle.

On July 23, Brooks participated in the annual Hoops206 Charity Basketball Classic in Seattle - an event that pits Pro Basketball players from the Seattle area against other players from the NBA. Participants included the likes of Brandon Roy, Jamaal Crawford, The fierce Brian Scalabrine, Brandon Jennings, the amazing Marcus Banks and others.

Also, on July 24, his own foundation, the Aaron Brooks Foundation held their annual Charitabowl Classic in Seattle - an event that assists in the funding of programs at middle schools in Brooks' hometown. These programs provide services to under-served at-risk youth in their schools. His foundation reported that over $6,000 dollars was raised that night.

Brooks has been all over the place this summer, from Phoenix indulging in some LoLo's Chicken and Waffles... 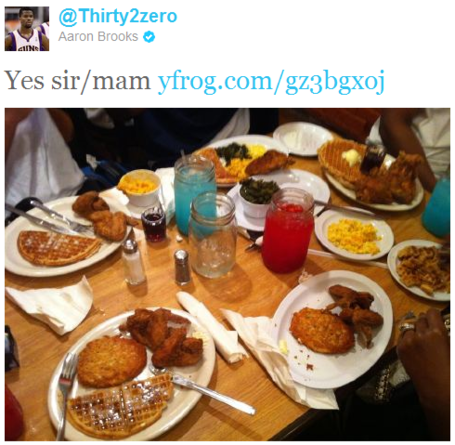 to Florida to Seattle where he seems to spend the most of his time working out and resting, bowling and enjoying the summer (something he says is much needed after an injury plagued season like he had last year).

He also caused a stir and made Houston Rockets fans yell mean internet things at him on Twitter. It all started when a friendly tweet to one of his followers was taken bitterly by others.

Seriously - if you don't have a Twitter... get one and follow me - then follow Aaron Brooks a.k.a. @Thirty2zero, his tweets are few and far between but they are pretty down to earth blurbs that would make you laugh if nothing else.

This is the part where you as the faithful reader and blog creeper evaluate Aaron Brooks' summer-report and leave at least 10 comments about it. Also let the Bright Side know what the most awkard place you've ever 'pooted' is. We're dying to know.

Stay tuned for our next episode of "What the Suns!?"