Share All sharing options for: What the Suns!? Episode 2 - Josh Childress Exposes a Balding Channing Frye

We've got a treat for you in today's edition of 'What the Suns!?".

Now first off - I don't get paid, nor does Wilfredo or Alex or EBR or any of the staff writers here at Bright Side of the Sun to do what we do here.  It's a labor of love and during a lockout it's a trial of creativity and of sanity at times... but what happened in the making of this article was awesome and brightens the dark cloud of the lockout in a small way.

Ladies and Gentlemen - Josh Childress was kind enough to take time out of his schedule to give us here at the Bright Side of the Sun an inside scoop as to what he's been up to this summer.   Let's get it on!

FOR BASKETBALL - Since Josh is a Suns team representative for the NBPA and because of his experience abroad playing with Olympiakos, he recently made an appearance on the Jim Rome show in a segment called 'Alone with Rome' where he talked about the Lockout and about Playing overseas.  The ESPN chumps won't let me embed the video so if you'd like to watch it here's a link.  When asked about how far apart the two sides (NBA and NBPA) were, Childress told Rome,

"Oh man, as far as the East is from the West - it's pretty bad brother...  I wouldn't say the season is in jeopardy, I mean I think the players are prepared for that but I'm hoping that we get something done and have some sort of season, but you never know."

He continues on to mention that players have been advised to prepare for a missed season and that he believes that the players will stay unified during the process of negotiation.  When asked if he'd consider heading overseas again for this season should the lockout last that long, Josh told the show,

"Would I? Probably this year.. uh - no I wouldn't.  I was over there the past two years and it's not because I didn't enjoy it, it was two of the best years of my life - I just think that I'm going to use this opportunity to maybe take some classes and try to finish my degree up."

I'm glad to hear he's going to stay stateside - Josh broke his finger at the start of last season, I don't know if I want him risking a blown-off finger for this or next year if he heads back to the M-80 throwing crowds of Europe.  Let's give Josh a full season with healthy fingers from the start please?

Anyways - Like I mentioned above, JCHill was kind enough to respond when I asked him for some input for his Episode of this series and this is what he wrote about his basketball endeavors this off-season so far.

I have been spending most of the summer traveling back and forth from Phoenix and Orange County, CA and doing my training in both spots. Working hard and trying to get better everyday.

FOR CHARITY - Childress has been busy helping out those in need both her in Phoenix and in California this summer.  Off the top of my head I remember Josh participating in a canned food drive at the Scottsdale Majerle's Grill, I've seen him give gear and shoes away on Twitter, I know he's visited Boys and Girls clubs around the state because I peeked and found this -

And when asked directly he mentioned that he held his 2nd annual JChill camp in California.

I had the 2nd annual JChill Basketball Camp at the park I grew up playing at in Compton, CA. I allow kids with a 3.0 GPA or better to attend and it's an all around great event. The kids get new shoes, shorts, and at the end of the camp I give out prizes for camper of the week in each age group and also highest GPA in each age group. This year's prizes included Nintendo DSi's, iPod's, XBOX 360's, and an iPad. It was great to reward the kids for a job well done.

Fun wise -- I have been spending time with my family and friends. Thats the most fun thing for me to do in the world. Playing some video games, doing a little bowling, and just hanging out. I have gone to a few of those indoor trampoline spots and they are pretty cool. I remember watching SlamBall back in the day and always wanted to try that stuff. Its been pretty hot out here in Phoenix this summer so I spent a ton of time inside.

Josh has also been flexing his spiritual muscles this summer as he regularly tweets about uplifting Bible Study sessions. Just think about that for a minute... we are lucky to have the high-character players that we do on our Suns roster.  Besides being charitable and overall good guys - the grand majority (the exception being Robin Lopez on days that aren't immediately followed by a full moon) have awesome humor.  Peep this latest tweet from @JChillin - 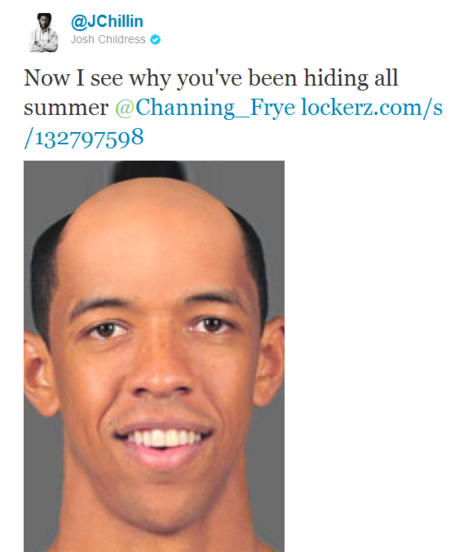 Funny stuff.  :)   And again - thanks to Josh Childress for giving us at Bright Side some love.

Now once again this is the part where you as the faithful reader and blog creeper evaluate this Josh Childress summer-report and leave at least 10 comments (can we settle for 5?  maybe?  PLEASE? ... I'm not desperate though..) about it.   Also let the Bright Side know what you've did for your summer break?  Anything as sweet as indoor trampoline jumping?

Stay tuned for our next episode of "What the Suns!?"