Share All sharing options for: Phoenix Suns Abused Bynum But Stifled By Walton; Breaking Down Late Loss To Lakers

The Phoenix Suns look like they turned a corner after the road loss last week to the Dallas Mavericks. The Suns played VERY well to blow out the Portland Trail Blazers and Milwaukee Bucks at home and then went into Los Angeles and played a pretty good game against the Lakers.

The Suns obviously lost in L.A. but looked much better than they did against the Mavericks and ultimately fell victim to this team's biggest flaw -- lack of late game scoring options.

We'll get into exactly what happened in those final few minutes when the Suns were thumped 16-1 in the final 6:27 of the game, but first let's recognize all the things that have improved in that last week:

Phoenix Suns come undone in 4th against Los Angeles Lakeres - Arizona Republic
"I'm just tired a little bit out there," Hill said. "I still have a ways to go to get my conditioning. No excuses. I got good looks. I just have to make them. I didn't run until three days before camp so I'm still getting my legs. Obviously, it didn't help having to chase him around but I've done it before and been able to be more effective on the offensive end."

I was going to go through every possession in the five minute stretch where the Lakers when from +1 to +14 but I don't have time for that. I did re-watch all those possessions and found one good example (below) of how the Lakers were able to stop the Suns.
This was very familiar to what we saw last season where the Suns lost in the final few minutes of games. The execution was pretty good and the Suns moved the ball and found the open guy, but the shots they ended up getting were the shots the defense wanted to give up. That's what happens when good defensive teams trap the pick and roll and rotate well.
Without a go-to scorer that can isolate and get higher-percentage shots, this is going to haunt the Suns all season long. There will be times when the open guy hits the outside shot and there will be times against lesser defensive teams when the Suns execution can still manage to create easy looks, but against good defensive teams...
Here's a great example of how the Lakers stopped the Suns. This came at about the 5:51 mark right after Nash re-entered the game after timeout. The score was 85-82 after Kobe hit two free throws:
The first action the Suns run is with Frye and Gortat setting up at the top of the arc. Nash runs off both screens with Walton hedging out to trap Nash. Frye dives to the lane and Barnes leaves Hill open in the corner to cover but that's a decoy.
Frye shoots back to the top of the arc with Gortat trying to pick off Walton and free Channing for an open three. Walton does a great job fighting through the pick and denying Frye the opening. 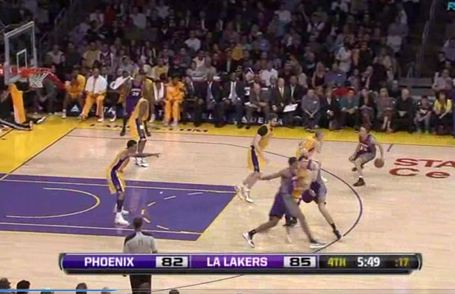 With that first option taken away, Nash sets up a high pick and roll with Gortat. Gasol traps Nash and Walton leaves Frye to cover Gortat rolling down the lane. 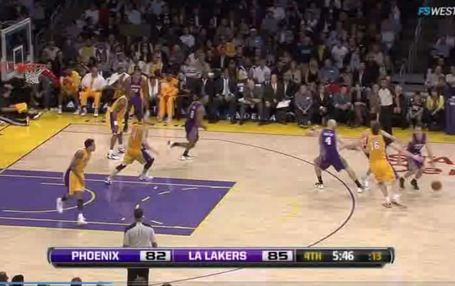 Frye floats to the open spot at the angle but Gasol and Walton both recover quickly and contest his shot while Barnes has rotated into the lane to cover Gortat, leaving Hill again open in the corner. 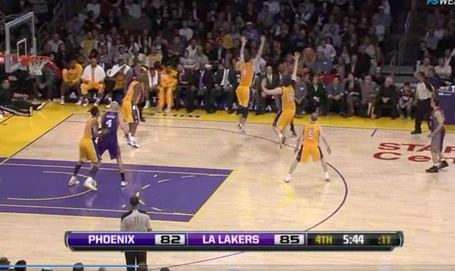 Frye can't get his shot off in time with Gasol and Walton coming at him and passes back to Nash for the third try on this possession. Steve goes to Hill but by this time Barnes has rotated back on to him and with 8 seconds left on the clock, it's up to Grant to try and make something happen. He dribbles the ball off his leg and ends up with a contested shot. 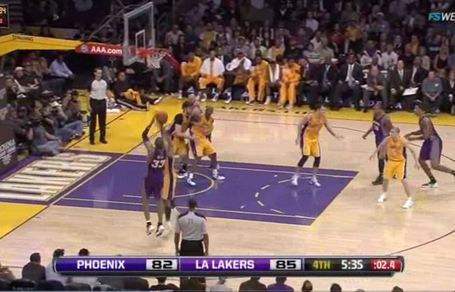 On this possession, Brown is in the far corner the entire time and Kobe never leaves him since he's the more dangerous shooter than Hill. The rotations by Barnes and Walton were very good. Blake did a good job staying with Steve, and Gasol was mobile enough to both trap Nash and also rotate out to Frye.
Good defense beat two solid offensive plays. Gortat did get the offensive rebound and passed it out to Nash who gave it to Brown who missed an open three. He had made a three just a minute earlier and was open so it was a good shot to take.
The Suns tried a few different variations on the pick and roll in the next couple of possessions but the Lakers rotations were too good. Here's all the shots the Suns got:
Nash got open for a three running off a double screen and missed. Gortat ended up with a 19 foot shot late in the clock and missed. Hill ended up with a three and missed. Hill turned down a three and attacked and still missed the lay up (his legs were gone). Hill hit 1 of 2 free throws to give the Suns their only point of the final 6 minutes. Frye missed a three and the Suns were down 14 with 1:10 to go. Game over.
Everything was outside the paint except for Hill's missed layup.
Props to the Lakers, who were well-coached down the stretch and played great defense. I'm not overly excited about that team because they don't get enough points outside of Kobe going insane but they were certainly good enough to beat the Suns with their D, as will quite a few other good teams. Playing Luke Walton at the four was genius move because he's such a smart player who rotates well. Josh McRoberts will get those minutes when healthy because he can do the same things defensively plus rebound, and is more of a scoring threat.
On the plus side, at least the Suns have worked through a lot of other glaring early season problems quickly and in this game were simply beat by their biggest flaw, which is a roster/talent issue.
Markeiff Morris stepping up in a game like this and taking advantage of a smaller four is the Suns' only counter move. Let's hope he gets there.