Share All sharing options for: Phoenix Suns Sluggish Pace Is (And Is Not) Related To Rebounding Woes

The Phoenix Suns are not playing fast. They said they want to continue to play fast AND focus on getting better defensively. They said that being good defensively helps you play faster. Those things are true and yet they rank 23rd in the league in Pace with just 90.7 possessions per 48 minutes.

So what's going on?

On Thursday Alvin Gentry talked about the sluggish Pace and said:

Phoenix Suns playing at unusually slow pace so far this season
"If you give up 20 (offensive rebounds), that's 20 times you don't get to run," Suns coach Alvin Gentry said.

There's truth to that, of course, but the situation clearly is bigger than just rebounding. History tells us that bad defensive rebounding Suns teams still played fast. 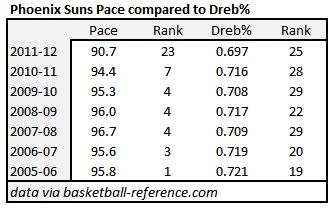 WARNING: We should ALWAYS be wary about small data sample sizes and SIX games is a small sample size.

The upside with small sample sizes, however, is that we can look at individual examples. Using the game logs from Hoopdata.com we find the following:

So is there a connection between rebounding and Pace? Sure, but it's far deeper than that. We all remember the days when the Suns were running on misses and makes. That was run and gun.

The problem now, it seems, is the team isn't in the up-tempo mindset. We see it in the half court where guys aren't shooting early in the clock even if they get an open look. Better rebounding will help initiate more fast breaks, but playing fast is more than that.

The issue is guys shooting poorly so they are not confident in taking shots which leads to extended possessions and often getting a bad looks at the end of the clock .

The issue is players not having enough time in the preseason to get into an up-tempo mindset.

Words like "rhythm" and "confidence" might sound hollow, but I think that's contributing to the slow start more than rebounding.

That's good news, by the way, because with time that mindset, rhythm and confidence should improve and the rebounding will get better too once Marcin Gortat takes off the thumb splint and the rotations solidify a bit more.

So don't worry, the Suns haven't turned into the Snails that we've seen so far. At least I hope not.