The Suns' bigs each provide a unique skill set. The amalgamation of those skills will be necessary to compete against the stacked rosters of teams Phoenix will be competing with for playoff positioning. Many seem to think the Suns are outmatched in this capacity, but that might not be the case.

The compiled list is an impressive array of the big men that populate the Western Conference. The names in bold are players that (for the most part) we can agree are comparable to, if not better than, either of the starters in the Suns' frontcourt.

Below are the four horsemen of the apocalypse (yes, I just went there) that will act as the Suns' unholy champions in their conquest of the NBA this year. 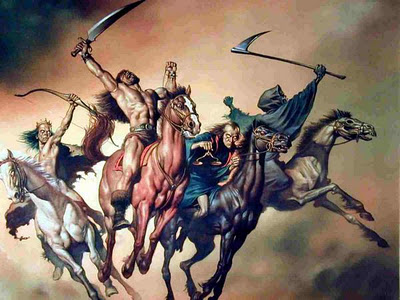 He may not like to drop the hammer anymore, but I refuse to dignify the newly suggested effete epithet for fear of emasculating his already tenuous claim to toughness. If the pride of Poland really wants to incorporate shape-shifting into his new persona he could at least pick an animal with a more savage reputation such as a bandersnatch. I'm down with War Machine to coincide with the theme of this post.

Gortat is not the most physically imposing center in the Western Conference. He doesn't eat up space like Marc Gasol. He doesn't deter players from attacking the lane or implant seeds of apprehension or hesitation from fear of a weakside block or a ribcage crushing foul. In fact, there will be few times that Marcin has a size advantage over his adversaries. I'm not trying to imply that Gortat is small or incapable, just that he's got his work cut out for him.

Marcin is the head of the spear for the Suns. His ability to defend the post, rebound and score efficiently is imperative to the team's success. After Dragic, he (probably) enters the season as the second most pivotal player to the Suns' success. He's kind of a big deal. Only three players in the NBA averaged at least 15.0 points, 10.0 rebounds and 1.5 blocks last season. One of them was Gortat with 15.4, 10.0 and 1.5. The other two were Dwight Howard and Andrew Bynum. Those three players also finished in the top six in the league in FG%, with Gortat 6th at .555. Yet Gortat remains undervalued and relatively unknown. Maybe it's because the huddled masses draw a preposterous corollary between alley-oops/highlight reel dunks and overall ability as a big. Gortat doesn't play above the rim, but he kicks ass below it.

Gortat is a well-rounded player, but he is not without weaknesses. He has earned his reputation as a finesse player on the offensive end. Sometimes it is infuriating to see him lay it in when he's in a perfect position to be disrespectful to the rim, but Gortat is actually a prodigious finisher. He converted at a .736 FG% clip last season. What this propagates, though, is a belief that other teams can bully Marcin (think the Jazz game at the end of last season). Not all of this is Gortat's fault, however, as it often seems he's on an island out there.

Gortat's free throw percentage fell from 73% in 2010-11 to 65% last season. It would be beneficial for this to uptick and make teams pay for putting him on the line. The other thing it would be nice to see in Gortat's progression is the development of a post to mid-range game. From 3-15 feet last season Gortat was only 166-395, compiling a FG% of .420. This leads to the popular question of whether Gortat's efficiency and production will slide without Steve Nash setting the table for him. That seems like a fair question, one that I can't wait to see Gortat answer this season.

From the opening tip on opening night I want to see Gortat with the mindset "this means war."

Scola enjoys killing them softly. The Ice Cream Man serves scoops laced with poison. He combines a set of crafty, surreptitious skills that are sometimes barely recognizable, yet undeniably effective. He plays winning basketball. He is the embodiment of the cagey veteran.

That aside, I am on the record as disapproving of the waiver claim that brought Luis to Phoenix. I didn't dismiss that Scola still had value as a player, although it appears that may be declining, but I didn't agree with the direction demonstrated by the move. In light of new evidence and events the acquisition appears more favorable, but not every action that produces a desirable outcome is a prudent action. Think Goran Dragic. I'm notorious for making stupid decisions that still work out for me. I will admit my error, but not that the case is absolutely closed.

Scola is another indispensable ingredient to a winning recipe this season. His ability to post up and use his body to create space to get shots off brings a presence to the Suns that has been sorely missed in recent years. Dude can score, just don't expect him to leave the floor while doing so. Scola is also an excellent passer, allowing for the offense to run through him to a certain extent. Luis is a decent defensive rebounder and post defender, but is a pretty weak defender overall. Most of his benefit is seen on the offensive end.

Scola is coming off an impressive Olympic effort where he managed 18.0 points, 4.6 rebound and 2.8 assists per game. So who are the Suns getting? The declining player some thought they saw last year or the rejuvenated player from the Olympics? Will Scola shake off a less than spectacular effort while navigating the obstacles of a lockout shortened season or is the death knell on his career looming closer in the distance?

Feast or famine that is. Morris appears to be the most aggressive player of the Suns' collection of bigs. He has displayed a rapacious appetite for shots during the summer league which has extended into this preseason. He has also displayed a tendency to commit fouls in slews. Those fouls need to be abated during the regular season, because as they say - you slews, you lose. The best players are the ones that can play and Morris can't play if he's on the bench saddled with foul trouble.

Morris struggled through his rookie season after a brisk start. He has displayed an array of offensive moves around the basket, a mid-range game and even range out to the 3-point line. What he hasn't been able to do is show an ability to do these things at an efficient clip. Last year Morris' eFG% was a rather anemic .448, while his new counterpart, Luis Scola, managed .491 in his worst year as a pro. Morris may be having an identity crisis in the Suns' offensive system, as it appeared he may have fallen in love with the three, or been coached into a perimeter player, based on propitious early returns.

This is a big year for Markieff. Last year posed a challenging situation for rookies due to the ramifications of the lockout. Now he has a full offseason of basketball under his belt. He has had the privilege of a training camp. Morris has the physical tools to play at this level. He needs to develop the mental tools. Playing smarter is the name of the game for Morris this season. Don't force the bad shot. Don't commit the silly foul. Temper your enthusiasm without arresting your aggressiveness. Play with emotion instead of letting your emotion play with you.

The best case scenario for the Suns is that Morris and Scola are pushing each other for playing time until their arms hurt. It's time for Morris to take the next step in his development and feast on NBA teams across the league. Otherwise he'll be a famine on a second unit, where he's much needed, that has to be a strength for the Suns to go where they want to this season.

In order for O'Neal to have a pernicious effect on Suns' opponents, he must remain pestilence free himself. Injuries and age are the name of the game for a player who has only participated in 187 of his last 390 team games (48%). Going back as far as the last 10 seasons, O'Neal has only been healthy enough to play in 57% of team games.

Enter the Suns' renowned medical staff. The ensemble of wonderworkers has had prolific success with preventive maintenance regarding the health of players. They are in need of a new project, after the departure of a couple of grizzled veterans, to continue to hone their skills and eliminate the possibility of atrophy. O'Neal presents a hopeless challenging project indeed.

That is the pendulum that swings for Jermaine this season. At one end is a productive role off the bench where he provides size, defense and rebounding. At the opposite end is a season plagued by injuries and ailments which render him ineffective. Will O'Neal be a blight on other teams or bench bound?

There's a very good chance that one or more of Luke Zeller, Solomon Jones and Ike Diogu will make the team in some capacity. If nothing else, the Suns need insurance against injury to the horsemen, especially the oft-injured O'Neal. While Jones and Diogu are veteran journeymen, Zeller is a fresh face on the NBA landscape. I would like to see Diogu on the roster because, well, I like Ike.

While it's doubtful any of these guys will have a profound impact on the season, it's definitely possible they might help the Suns in a pinch. I'm not trying to knock these guys either. Out of 7 billion people in the world, only about 450 will be on NBA rosters this year. Just getting to this level is quite an accomplishment in and of itself.

Time To Bring It

Now we wait and see. Can Gortat bring the fight and silence his critics? Can Scola shake off a lackluster season and be an insidious assassin? Can Morris supply some muscle to aid the War Machine and suffer through less periods of famine this year? Can O'Neal stay healthy and make a meaningful contribution? I'm ready to watch them scrape and claw with a palpable desperation. I'm ready to watch them bring it.

The Suns' frontcourt may not be the most massive in the league, but the size of the fight in our horsemen is immense.