Bright Side of the Sun Staff Predictions

I've already given the correct answers my preview and predictions (shame on you if you haven't seen the video), but what about the rest of the Brightside cadre? Below is their profound wisdom along with a special ending to my preview video, artwork, and humor that only I seem to get speaks to everyone. You can only get this kind of superb content on Bright Side of the Sun!

Share All sharing options for: Bright Side of the Sun Staff Predictions

The platform pantheon's prognostications were based on the same five questions I answered in my SB Nation Season Preview Video. They are:

1. What will the Suns' record be? What place will they finish in the Western Conference?

4. What is the team's greatest area of concern?

5. Who will win the NBA finals?

Here are their forecasts:

1. 46-36, 8th in the West. I don't know why, but I really think this team will be effective this season. Dragic and Scola have won games before, and they're our new focal points on the first-team offense. And I really do think that Beasley will be a nice player for the Suns, despite being frustrating sometimes (or often). It's ridiculous for national media to think the Suns offense will be a problem - it won't. It's the defense that will have to establish itself. By playoff time, the top seeds are not going to want to face the Suns.

2. Goran Dragic will be the MVP - and the most likely player that national media will gravitate to in previewing Suns games. I also predict that 3-4 more games will be televised nationally than are currently scheduled (5). Dragic is ready to break out as a floor general. While media looks to Ty Lawson, Darren Collison and Stephen Curry to make hay this season, I predict that Goran Dragic will outshine them all.

3. Of course Beasley is the X-factor. If he can approximate a season that matches his talent - 18 and 6, with a .450 shooting percentage, from the SF position - the Suns will be in great shape. Beasley can get his shot off against anybody - his release point is so high and so clean that any shot he takes can go in the hoop. Gentry wants him taking 20 shots in 30 minutes of playing time, and that's just about right for the Suns' best pure scorer. The reason Beas is the X-factor rather than MVP candidate is that he takes bad shots and can regress into a fog at any point in the game for several minutes.

4. The greatest area of concern is the wing position(s). Offensively, Beasley, Johnson and Brown all have the propensity to keep shooting jumpers on nights they aren't going in. And in this offense, you don't freeze out the wings from the flow of the ball. They will get their chances. Gentry needs to find a way to control their tendencies, because he certainly can't bench all of them at the same time. Defensively, they need to be passable. If Gentry has to go long periods of time with PJ Tucker in the lineup alongside Jared Dudley, the Suns are in trouble. They need to defend okay and control their wild shots. If they can do that, the Suns will be fine.

5. Miami Heat will win another championship over an as-yet-unknown team. The Lakers are just too old (and brittle) and the Thunder just go worse by trading Harden. LeBron and clan are young, healthy and just too good.

1. 37-45, 11th in the West. I still don't know what to think of this team. I could see them finishing as high as 45 wins and in the playoffs, and I can also see them with 30 wins and near the bottom of the conference. So I'll split the difference.

2. Goran Dragic is the unquestioned MVP of this team. For the team to finish closer to the ceiling I mentioned, he needs to unleash the Dragon on a nightly basis. He needs to find the proper balance between being aggressive himself and looking to set up his teammates. As Dragic goes so will this team.

3. Michael Beasley will be the X-factor for this team. If he's the same guy we saw in Minnesota, Phoenix's season will end similarly to Minnesota's with him starting on the wing. But if he can continue to build off of what he's done in the preseason, the Suns starting line-up could be pretty potent. Honorable mention to Markieff Morris, who needs to take some big strides soon for the bench.

4. There are a couple areas that concern me with this team, and it's hard to single out just one. The starters have a long way to go on defense. If they can't get it together and figure out the rotations, it won't matter how many points we score. It's the exact opposite for the bench. They seem to be a bit farther along defensively and have a chance to be a hustling and disruptive unit, but the offense goes stagnant far too often. Perhaps the answer is mixing and matching starters and reserves instead of playing two units, although you could run into danger there as well.

Sean Sullivan (Large and in Charge)

1. I believe they will win between 40-45 games this season, so I suppose I'll go with 42. They may slip in as an 8th seed...or just miss the playoffs. Yes, I believe this year's team is a better team overall than last season, and I think their record will reflect that...though they obviously still have a way to go to be considered a legitimate threat or a contender to win a title.

2. I'm going to go with the safe bet here and say Dragic. Goran has been impressive in his somewhat limited minutes during the preseason, and I believe the Suns will go as far as he can take them.

3. I believe we'll have two x-factors (is that allowed?). Beasley with the starting unit and Wesley Johnson off the bench. I believe many people are underestimating the impact that these two players could have on the Suns, especially with Wes who seems much more comfortable in his role on the second unit.

4. I think the obvious answer is the lack of a true superstar. We lost the only superstar we had when Nash sold his soul to the Devil...err...Jerry Buss. So the Suns are left with a team of mostly role players and gambles with a few really solid starters. Overall, I like the direction of where the Suns seem to be headed...You can't build Rome in a day (unless you're the Lakers of course), and they now have young, athletic talent and cap flexibility moving forward which they can use to further improve this team in the near future.

5. I don't think the Lakers will be quite as dominant as many are anticipating. They'll be good for sure... But I don't know if I'd order their rings just yet. I still think the Thunder will be the best team in the West this season, and of course the Heat out of the East. I think the Heat figured some things out last season and will be really hard to beat again this year, so I'm going with them for the repeat.

1. The Sun will win about 35 games (not that there's anything wrong with that). I have them finishing roughly 10th in the West, ahead of Houston, Portland, New Orleans and...OK, make that 12th in the West.

3. The entire team is an "X-factor" since the only real proven players are Dudley, Gortat and Scola and they are all role players on a contender. Dragic (who's my real pick for MVP, duh) has never had the keys to his own car for the entire season. Beasley is highly beasleyable, Wes Johnson could turn into a real find or he could end up being benched in favor of P.J. Tucker. Only the biggest homer/optimist could look at this roster and assume everything will work out for the best. And I'm not saying it won't, just that it's highly improbably. But in the spirit of the question, I'll go with Beaz. He's got the most upside and the greatest potential to go supernova (in a good way).

4. Welp...lack of top flight NBA talent is certainly a good place to start. It's a nice little roster. Could be fun at times. And if you added just one top-15 NBA player to the mix you might have something really special. Lacking that (which they are), there are going to be many nights when they can't get stops against good offensive teams and can't score late in game against good defensive teams. The biggest specific area that will haunt the Suns all season is rebounding. Gortat and Scola are going to get killed on the glass two out of every three games (don't let the third game fool you into a false sense of hope).

5. Here's my theory: If the Lakers manage to get all the way through the West, it will mean they are healthy and have figured out how to use all that talent. If they meet Miami at that point, they create a match-up nightmare with Dwight and will win it all (don't shoot me yet!). However, I think the Lakers have too many issues and won't come out of the West which means the Heat repeat (OK, shoot me now).

1. 30-52 (12th in the Western Conference) and they will finish 4th in the division behind the Lakers, the Clippers and the Warriors.

2. The team's MVP is Goran Dragic. He's the leader and will be our most valuable player.

3. The team's X factor is Michael Beasley. A lot of games will depend on what performance we get from Beasley.

4. Our team's biggest area of concern should be the team chemistry. Without this team gelling together, we could be in for some trouble.

5. The Boston Celtics defeat the Oklahoma City Thunder in 7 games. The Celtics' depth carries them in the playoffs; Garnett and Pierce both retire after the season.

1. The range on wins was 30-46 with a mean of 38. I picked 39 in advance of the staff predictions due to my pervasive despondency typical balanced perspective. Dave is the only contributor crazy brave enough to put the Suns in the playoffs with a firm maybe from Sean.

3. Beasley across the board, although Morris got an honorable mention from Jacob and me.

4. Defense seemed to be the most prevalent response, with rebounding, chemistry and lack of talent nipping at its heels.

5. 4 Heat, 1 Lakers, 1 Celtics. No Thunder - this was taken before the Harden deal... not that it would change anything.

So there you have it folks. What did we get right? Where were we fatuous, mistaken or oblivious? Put your answers to the five questions we answered below and remember to make your predictions, this is where they're indelibly etched in stone to revisit at the end of the season.

I'll leave you with one more thought from the dark shadowy corners of the vacuous void of blackness inside my macabre mind. 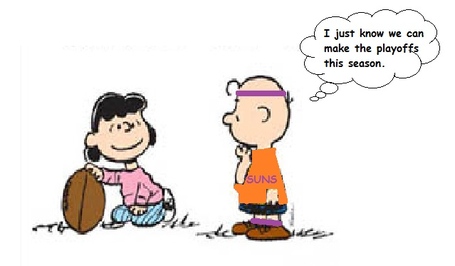