The Suns love Wes Johnson. Wes Johnson loves the Suns. I love opening night and, being that it's Halloween, peanut butter cups. Everybody loves everybody. In spite of all that palpable love, the Suns declined to exercise their team option on Johnson by today's deadline meaning that he will become an unrestricted free agent at the end of the season.

From all accounts, it seems that Johnson has been successfully acclimating to his new environment. By virtue of trading for Johnson it seems safe to assume that there was at least a scintilla of intrigue on behalf of the Suns. A glimmer of hope that he may shake off early career struggles and realize some of the potential that made him a high lottery pick. Likewise, it would adhere to logic that Johnson would welcome a fresh start in a new setting with this being a very important year for him to establish himself as a player in the league (and audition for his next contract).

Johnson has had his ups and downs this preseason. He actually played pretty well the first four games, reaching double figures in scoring in each game, before his role shrunk in the last three outings. His overall points, rebounds and efg% were actually above his career averages (per36) of 11.2, 4.2 and 47.0%. But it's the preseason and there's no way the Suns are making an important decision off of a minute sample size in meaningless games.

Despite the love-fest filled with obligatory platitudes issued from both sides, declining Johnson's team option shows sound judgment. In this situation it's a numbers game. First, Johnson's option amount of $5.4 million is ludicrous. To this point he hasn't shown he can even make a positive contribution to a team. His numbers have been meager and unspectacular. The Suns appear to have at least four players on their roster who will provide more bang for the buck. Why be a wastrel and overpay for the unproven commodity of Johnson when a player like Jared Dudley comes cheaper? Second, the Suns have cap implications to consider and giving Johnson that guaranteed money severely hinders their flexibility. 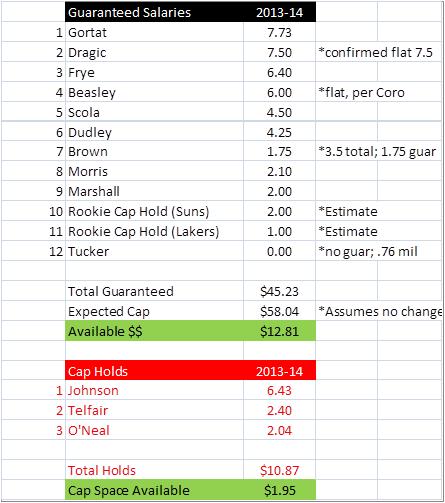 As the above graphic (courtesy of Dave King) reveals, the Suns are slated to have around $13 million in cap space next season. If the Suns had exercised Johnson's option it would have been closer to $7.5 million. The Suns are still working towards their goal of reaching the zenith of the NBA and competing for a championship and having enough cap room to sign a top flight player is a priority. Locking up money on an unproven Johnson doesn't facilitate that goal.

So where does that leave the Suns, Wes Johnson and their mutual affection? Here are some possible scenarios:

1. Johnson continues on his previous career trajectory. No thanks. Good luck Wes.

2. Johnson solidifies himself as a solid contributor off the bench. The Suns entertain bringing him back at a reduced rate.

3. Johnson wildly exceeds expectations (very remotely possible) and the Suns have a more difficult decision to make. With Johnson being an unrestricted free agent he wouldn't come as economically in this delusion scenario.

4. The Suns trade Johnson's expiring contract before the trade deadline.

With either 1, 2 or 3 the Suns will have Johnson's cap hold to deal with this summer. They may have to make their decision quickly, or ahead of time, in order to maintain maximum maneuverability next summer. So while they both love each other now, both sides (especially the Suns) will have important decisions to make between now and July 1, 2013.

The good news is that no matter what they decide I will still love peanut butter cups.