Point guards past and present: Is Nash subverting the Dragon?

Goran Dragic had lots of great sound bites at Suns' Media Day. I'll delve into a couple of the juicy morsels, but one thing struck me as particularly interesting. It wasn't necessarily what he said, but the emotion it evoked. I wonder if other Suns' fans feel the same way?

Share All sharing options for: Point guards past and present: Is Nash subverting the Dragon?

It was good to see Goran Dragic back in a Suns' uniform (like he belongs). His less than perfect enunciation (complete with those Slovenian h's) was more than compensated for by his photogenic visage, which included a little bit of stubble above the upper lip. Goran said that until recently he hadn't been able to sport a 'stache, so now he was experimenting with it. What do you think girls, mustache or no mustache? The direction of the conversation then veered off of facial hair to expectations for the coming season.

"I don't care when other people say we're not going to make the playoffs," Goran said dismissing the pessimistic pundits. "Me personally, I have my own goals. We want to make the playoffs. I know it's going to be hard, but dreaming is not forbidden." I'm going to let this one slide due to Goran's less than impeccable mastery of the English language. Dreaming about the playoffs? Look how the mighty have fallen.

Goran echoed previous sentiment that as soon as he found out the Phoenix Suns wanted him back he was "all in". Right after the Suns called to express their interest, Dragic was buying a plane ticket to Phoenix (which I hope they reimbursed him for before the ink was dry on his new contract). He definitely appeared quite smitten when he arrived for his free agent visit to cheers from the paid staff adoring fans.

"Of course (I always wanted to come back)," stated Dragic. "My family lives here, my cousin lives here, I have a house here and I know the people in the Phoenix Suns' organization. It's really not hard to adapt on this team." Goran had other glowing remarks about living in Phoenix as opposed to Houston, mentioning that he preferred heat to humidity and monsoons to hurricanes.

Goran was brimming with brio and vim, the sparkle quite evident in his eye during an unfettered session with reporters. It appears that there isn't an iota of ill will stemming from Goran's demotion to the Texas farm team. Now that he has been called back up he is ready to play ball. Then the conversation took on a more tenebrous tone as the topic tilted to everyone's favorite new Laker.

"I'm not like Steve," said Dragic. Very true, Goran, you are not a perfidious traitor.

"Nobody can be like Steve," continued Dragic. Correct. Steve Nash's treachery has debased his character to unparalleled depths.

"He is one of a kind," cooed Dragic. Remember when that used to be a compliment?

"I just want to be me. Goran Dragic," Dragic finished. Fair enough. Just please don't ever go all Hollywood on us. It makes my stomach turn.

The words are Dragic's, but of course I'm adding my own commentary to pervert his intent report the truth. These opinions do not reflect the viewpoints of Goran Dragic. Obviously, because guess what the Dragon had to say next....

Ah, the good old days. Back when Steve Nash still had a soul. Those were halcyon times. That is when I was struck by an afflatus. Why is the Lakers' new point guard trying to corrupt Goran? Hasn't Nash already done quite enough for to the fans in Phoenix? What diablerie is at work here?

I know that players have lives independent of what takes place on the court. It is not my place to be the arbiter of which types of friendships are permissible. Players can develop and maintain relationships with teammates just as well as adversaries. Accepting that still doesn't leave me in a safe haven of neutrality for the events that we will be subject to this season.

I can almost see it now. Nash disporting himself jovially onto the court at USAC amidst a vociferous barrage of boos from the obstreperous crowd. Then, at the placid center of the maelstrom, Steve and Goran will share a gentle embrace. Kobe Bryant will be off to the side giving Alvin Gentry a playful pat on the ass. Not only will the Lakers kick our teeth in, but the Suns will be smiling while they do so.

Don't listen to him, Goran! Steve is conning you just like he conned all of us. I know this is a very serious accusation, but I'm calling shenanigans on this unholy tryst. Evil shenanigans. Stay away from our point guard, Steve! Haven't you already done enough.... 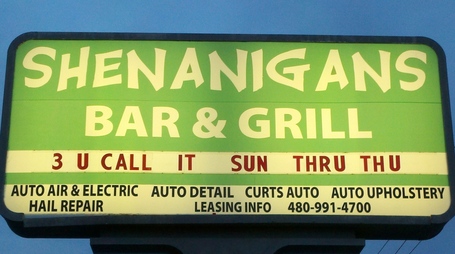 What do you think? Is it appropriate for Dragic to be sleeping with the enemy? Do you care, or is it much ado about nothing? Maybe instead of my allegation of shenanigans sticking, it will end up being the place that Steve and Goran meet for drinks to celebrate the Lakers' latest conquest....

I will aver this much. After they hug it out at center court (I've resigned myself to the fact that this will happen), I want Dragic all over Nash like a Rottweiler on a ribeye. I hope he knocks him right on his ass. Hard. Then embarrasses and exposes him. That's my dream of the way it plays out, and just like Goran said, "dreaming is not forbidden."