The Phoenix Suns entered the fourth quarter of their first game with a two-point lead over the Warriors. They only managed 18 points in the final period thanks in large part due to the shots they chose to take...and miss.

After the Suns home loss on Halloween night, Goran Dragic talked about the need to make open shots. There's no denying that. Guys that are open, like Jared Dudley at the top of the arc without a defender in the same zip code, need to make those shots -- and on many nights they will.

But that doesn't change one basic fact that's kind of like the law of gravity: the closer you are to the hoop, the higher percentage of shots you will make. Sure, there will be times when that rule is broken by a hot hand, but we all know what to do when the hand goes cold.

You attack the rim.

You do that via the dribble drive. You do that with a competent post player who can back his guy down, turn, fire, and swish. Kind of like that ONE time at the 1:43 mark when Scola abused David Lee (a horrible defensive player).

What I saw during that stretch was Shannon Brown taking too many contested outside shots (he went 1-4 in the quarter).

I also remember Dragic and Gortat trying to run middle pick and roll but with Scola out behind the three-point line angle right where Frye normally chills. When the defense collapsed, they kicked to the open Scola who doesn't shoot threes like Frye. Miss.

Another time running the pick and roll they kicked to Tucker on the left wing who missed a wide open long jump shot (he's not a jump shooter either).

The only thing that did work was P.J. Tucker who scored 10 of the Suns 18 total points and was 5-7 in the 4th. He was also the guy who finished almost every play the Suns did manage to score in the paint during the quarter. He moved without the ball and received passes from Dragic and Dudley and had an offensive rebound put back.

The numbers below (via NBA.com) support what we saw during the game. Too many outside shots. Look: 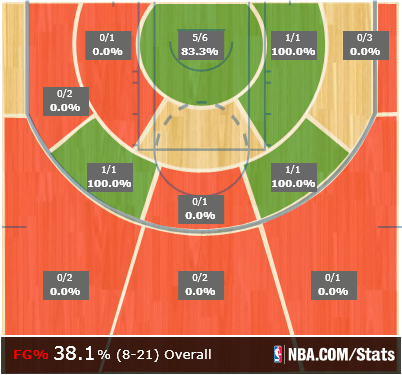 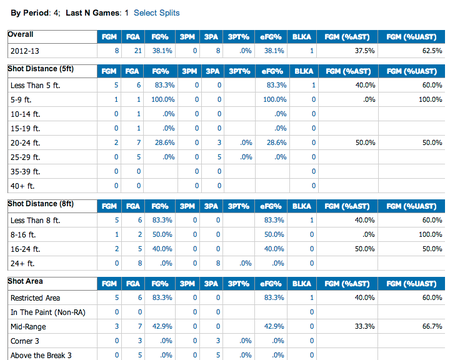 It's one game. Not the end of the world. They'll improve. Yadda yadda yadda.

Let me add a few things here...because I've clearly not said enough on this subject yet.

There's no problem with taking outside shots. Defenses are going to pack the paint and make you beat them from "over the top". You have to take those shots when they are open to loosen things up. Sometimes they just aren't going to fall.

A perfect example was the wide open three Jared got late in the game. It was a great play. Goran got deep into the paint. The defense collapsed. Goran made a fantastic pass from the baseline to the top of the arc. Jared is a great shooter. He missed. Whatever. Shit happens.

The problem I saw was the decision making with the second unit (in particular our old buddy Mr. Brown) and the play calling that ignored the post too many times in favor of the pick and roll.

Pick and roll is nice, but if we've learned one thing over the years watching the Suns run it ALL THE TIME, is that you need shooters to space the floor unless the defense is totally asleep. The Warriors rotated well. The Suns didn't have the gunners to make them pay. So why run the play? Why ignore Scola who's got a mismatch against Lee in the post? Hell, why not even give Jermaine O'Neal a shot at going against the much smaller Carl Landry in the post?