The Suns opened on Halloween night with a new look team full of fresh new faces on a new look court. After a slow start, a Suns' comeback made it look like the fans would be in for a treat. But the new look Suns reminded me of the old look Suns, and when the final buzzer sounded I felt like I'd been tricked again. 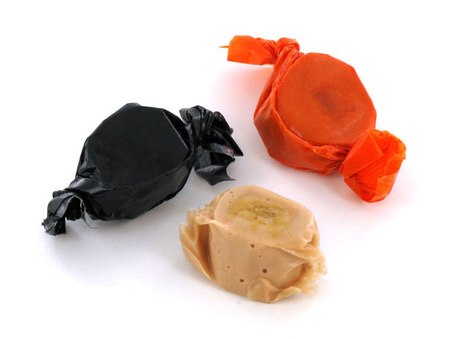 I would guess the majority of you have had the misfortune of choking one of these down. Before I looked up these abominations to Halloween candy I didn't realize they were called peanut butter kisses. After all, the manufacturer is so ashamed of their creation that they wouldn't even put their name on the wrapper. These things are supposed to taste like peanut butter?! Peanut butter should file a lawsuit for character defamation. And where does the kiss come into play? The kiss of death? Kissing your appetite goodbye? How about telling the person giving these to trick-or-treaters to kiss your @ss?

The Suns were that person last night. They were just about to grab the chocolate variety bag full of funsize Reese's, M&M's and Kit Kat's, but at the last second, by virtue of some nefarious mental paroxysm, they decided to go with the @$ck#ng peanut butter kisses instead.

Filling an arena on Halloween is a tough task. I'm sure that's why the crowd was reported at 2,800 below capacity. Then again, everybody in the lower bowl may have decided to wear the same invisible man costume... The goblins and ghouls that were in attendance watched a pretty damn ugly tumultuous game with a 25 point swing from when the Warriors led 46-29 in the second quarter to where the Suns went up 74-66 in the fourth. It looked like the wheels were coming off for Golden St., but it turned out to be just a sugar rush for the Suns, who faded down the stretch in an opening night loss.

New team. New players. Still, some of the similarities were downright spooky.

1. A lineup of Telfair, Brown, Beasley, Morris and O'Neal opened up the second quarter and the Warriors went on a 13-2 run. The lead ballooned to 17, at 46-29, before the Suns starters returned and cut lead to six at halftime. Similarities - bench getting murdered, losing the second quarter (-2).

3. Luis Scola scored with 1:43 left to give the Suns an 84-83 lead. The Suns failed to execute the remainder of the game including the closing moments that were comically embarrassing for both teams, mirroring much from a game that was sloppy and disjointed. Similarities - poor execution down the stretch, no go-to scorer.

4. Shannon Brown still looks like Shannon Brown. The mad chucker was on display again last night, taking bad shots when the Suns couldn't afford it. In another disturbing trend, it appears that Michael Beasley may be a slightly more talented version of Shannon Brown. This may not change much, either, since Gentry is publicly saying those are good shots for Beasley that he usually makes when he should be privately waterboarding him after the game. Similarities - Brown is Brown, Beasley is also Brown.

5. Golden St. had 17 offensive rebounds, including seven in the final quarter. Three of those offensive rebounds resulted in seven points during the Warriors' 15-4 run that cost Phoenix the game. If the Suns don't give up those rebounds they probably win. Similarities - losing on the glass (-5), getting owned on the offensive boards (-6)

6. The Suns scored 85 points. 85. I guess "pushing the pace" doesn't explicitly correspond to scoring, but I was hoping that a triple digit point average was at least implied in the rhetoric. The fans that forewent trick-or-treating to attend the game didn't even get free tacos. The Suns failed to reach the 90 point mark 12 times last season (almost one in five games) so hopefully last night wasn't a precursor of a repeat performance. Similarities - struggling to score, struggling to run (11 fast break points)

7. Please feel free to add your own.

Friday night the Suns will attempt to exorcise these ghosts. One game does not a pattern make, even when it resembles a previous pattern. I'm looking forward to a more consistent effort and even more positives against the Pistons. Because just like those noxious candies straight from hell, the first game left me with a bad taste in my mouth.