The Suns have rebuilt their image and team, but in doing so have been adamant that they will continue the recent tradition of frenetic, fast-paced basketball. There seems to be a logical lacuna inherent to this strategy.

The reason for a team to employ an offense geared towards extra possessions (pace) is that by doing so, coupled with an offense that shoots the ball well (scores efficiently), that team can have a better chance of outscoring their opponent. This is the philosophy the Suns have chosen to implement this season according to all reports from their organization. There's only one problem. 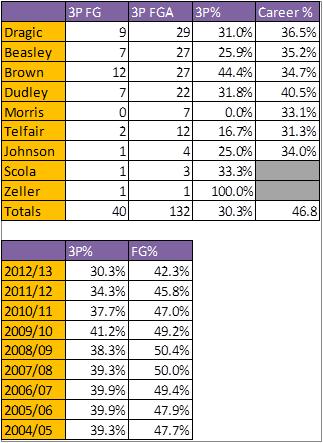 The Suns were never lower than 4th in the league in the league in pace (# of possessions per 48 minutes) during Mike D'Antoni's tenure (they were 1st twice). They were even 4th during the Porter/Gentry season. The team slowed a little bit over the last thee seasons finishing 4th, 7th and 8th, respectively. The Suns push the tempo. This year the Suns are in high gear so far, currently standing at 2nd in the league in pace.

So far that hasn't been good.

As horrific as the overall drop in field goal percentage has been, it seems it has been trending this way. After a seven year stretch that saw the team average nearly 49% and never dip below 47%, the team dipped to 45.8% last year and has bottomed out (I hope) at 42.3% to start this season. The FG% has in fact decreased (depending on the much larger remainder of this season) each of the last five seasons.

The results from three point range have been even more nugatory. The Suns currently stand at 30.3%, which would be a full 10.9% drop from the 2009-10 season. That's over one extra three per 10 shot attempts, or just over two extra three point shots made per game based on their current 18.9 attempts per contest.

These Suns aren't those Suns, though, so that may be an unfair comparison. So, of course, I've devised another.

They could have probably used a few of those points in the season opener against Golden St. or in a couple of their other losses to keep them from getting out of hand.

So why are the Suns failing epically struggling shooting the basketball this season? Here are a couple possibilities:

The first step in fixing a problem is admitting you have one, and Phoenix, we have a problem.

Will it auto-correct? Doubtful. What the Suns were able to accomplish over the better part of the last decade was truly special. It is unlikely this team will be able to match the pace or efficiency of those previous incarnations. They will hopefully at least come close and not become a pitiful travesty.

The Seven Seconds or Less era is gone. The "New Era" is Eight Seconds or Beasley.