Will the Suns be represented at the 2013 NBA All-Star game?

Balloting for the 2013 All-Star game in Houston began today and three Phoenix Suns are on the list of potential candidates. What are the chances that Goran Dragic, Marcin Gortat or Luis Scola can crack the rosters for the February 17th festivities?

Share All sharing options for: Will the Suns be represented at the 2013 NBA All-Star game?

This is the incipient edition of a new All-Star balloting structure. 120 players (60 in each conference) were selected by a media panel who labeled them as guards and frontcourt, eliminating the center position. The ballot for each conference consists of 36 frontcourt players and 24 guards. Voting, which began earlier today, will conclude on January 14th, with the starters being announced January 17th.

The NBA has also instituted new social media voting methods that should appeal to its younger audience (as well as old guys like me who are still hip - young people still use that word, right?). Twitter can be used to vote for one player per day (include first and last name with hashtag #NBABALLOT). One ballot can be submitted each day using a Facebook application. The ballot can also be accessed on NBA.com pr the NBA Game Time app by Sprint. Finally, fans can vote through SMS by texting the player's last name to 69622 ("MYNBA"). 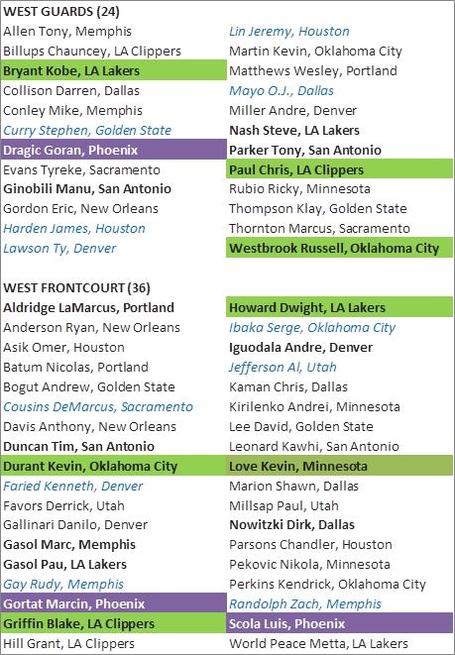 Kevin Love (expected back from broken hand in 2-3 weeks)

Tim Duncan - Timmy has started off the season hot with averages of 19 and 10. He also has that whole lifetime achievement award aspect going for him if he can maintain anywhere near his current level of play. Duncan could also be selected as the backup center OR a power forward so that may help his cause. Regardless of the new frontcourt selections for fans, I'm of the opinion this will factor into the coaches thinking.

Tony Parker - He has been a little more tepid out the gate than his partner in crime, but his scoring numbers will most likely revert to an expected level. Another thing to consider is that if the Spurs are at or near the top of the Western Conference they will definitely get (at least) one spot.

James Harden - As the focal point of the Houston offense, Harden will get every opportunity to pad his statistics. Expect him to average well over 20 points a game even if it takes him over 20 shots to get there some nights. Match his (potentially) inflated numbers with the hype he is already receiving (3rd best shooting guard in the league) and he is very likely in whether you believe he deserves it or not. Oh yeah, the game's in Houston, too.

Andre Iguodala - The versatile Iggy will have a chance to put up bloated numbers in Denver's up tempo system. The Nuggets are likely a playoff team and will probably garner a spot based on the premise that good teams generally aren't left without a representative.

Marc Gasol - Gasol represented the Grizzlies last year and is probably the leader in the clubhouse to play behind Howard in terms of a true center. Once again, the Grizzlies fans will feel spurned if they are in the top half of the conference with no selection.

Dirk Nowitzki - Normally a lock, Dirk's knee injury might hinder a 12th career selection. Nowitzki isn't expected to return until early December and it's quite possible he won't explode out of the gate. He does have the fact that he's Dirk Nowitzki working in his favor, but will that be enough?

LaMarcus Aldridge - LMA is shooting 7% below his career average (.425) and is still averaging 20.7 points per game. This is his spot to win, since the Blazers squad is built to give him every opportunity (much like Harden in Houston).

Stephen Curry - A preseason injury may have lingered and sabotaged his early performance, but there's still time for possibly the closest thing the NBA has to a 50/40/90 threat to round into form.

Manu Ginobili - Manu "the sneak" is one of those players that coaches seem to love, plus he may get sentimental votes if he outperforms expectations.

Ty Lawson - Like several other candidates on this list, Lawson has suffered through shooting woes. Despite a FG% nearly 9 points below his career average (.407), he has still managed 13.5 points per game as well as 7.8 assists. It's not unfathomable to postulate that Lawson could put up 18 and 8 this year, especially since he's only 25 and almost did so last season (17 and 7).

O.J. Mayo - I'm admittedly surprised to see this guy crack my list, but he has capitalized on Nowitzki's absence by posting career high scoring and efficiency numbers. Obviously he can't sustain a .600 eFG%, but can he carry the offensive load for the Mavericks to the point where he demands serious consideration?

Jeremy Lin - The only reason he is listed here is due to the lunacy of voters. If the fans in Houston (where the game is being played) and overseas vote him in as a starter a part of me will die.

Kenneth Faried - I wish Faried was a Sun. This is exactly the type of dude you want on your team. Will a star driven league recognize someone who excels based on hustle and drive? I can't imagine the coaches don't realize what he brings to the table.

Pau Gasol - He is probably the odd man out. I don't see him getting enough touches to put up numbers that would validate his selection. Not too bad of an odd man out if you ask me, though.

Rudy Gay - He always seems to be in the fringe all-star conversation, but appears to have a bridesmaid dynamic going on (trust me, I know how that feels as a Suns fan). It might just be that he spends his career in that tier right below the upper echelon.

Serge Ibaka - His reputation a rim hawk might put him in the conversation. He has also had an early surge in scoring this season. Maybe his biggest obstacle in hurdling his bubble status (you'd think it'd be easy, dude can jump) is being the third wheel behind Westbrook and Durant (see Gasol, Pau).

Al Jefferson - Big Al is a consistently solid basketball player who has always been on the outside looking in relative to the All-Star game (including one year when he averaged 23 and 11). Could he be considered this year as a backup center?

Zach Randolph - He completes the triumvirate of Grizzlies deliberated upon in this sequence. He fits the mold of a true power forward, although not as sexy as some of his counterparts.

Luis Scola - Let's get him out of the way first. Scola is a very consistent and solid player, but not an All-Star. Enough said.

Marcin Gortat - The way I'm looking at this is - Can Marcin beat out Duncan and Gasol? I have to think that the coaches will select one player that they pencil in as a backup center. He has an uphill battle ahead of him because I still think he's the NBA center version of Rodney Dangerfield. Gortat might be the only player in the league who could be top five in rebounds and blocks... and still fail to make the all-star roster. It would benefit Gortat to get his scoring average on the north side of 15 if he wants to be in the discussion, because I really feel that he's going to have to kick the door down to make this roster due to his peculiar lack of pedigree. Gortat must not only beat out the players ahead of him, but also shatter the perception that has been established which doesn't include him in the same class as his adversaries.

Goran Dragic - This is probably the Suns' best chance, but it still isn't a great one. I'm speculating that there will probably only be five guards on the roster. Chris Paul and Russell Westbrook are automatic at the point, which would leave only one more spot for another point guard, but since Westbrook can move to the two and so can Dragic that might be an opening. Goran will have to up his game. 16.6 and 7.5 isn't going to get it done. I think he will have to climb to at least 18 and 8 and the Suns will have to be at least a couple games north of .500 for Goran to gain the nod from the coaches. That's an awful lot of bold/italics, but I'm really trying here. There are two players on this list that I don't think Goran can beat unless they come back to him - Harden and Parker. If Dragic can somehow pass one of them or the coaches decide to go with six guards, can he sneak into that last spot? Probably not, but stranger things have happened.

There are two factors that I see as major stumbling blocks for the aspiring Suns players:

1. The Suns aren't going to earn special consideration from the coaches unless the team surprises them by wildly exceeding expectations. Bad teams don't generally send borderline players to the All-Star game. Hovering right below .500 probably won't get it done, either.

2. The Suns will have to be decisively better than the competition due to their lack of hierarchical standing. If Gortat's a little bit better than Duncan, Duncan will be selected. If Dragic's marginally better than Harden, Harden will get the nod. I don't know that I'd necessarily classify it as disrespect, more like indifference. I believe that the consensus opinion is that Dragic and Gortat are nice players, but they've never really been considered as potential all-stars...

So while it would be nice for a Sun to receive recognition this season, I'm not expecting it. My expectation is that our team and our players will play to the best of their talent and capabilities and all the other stuff will take care of itself.

What do you think? Did I omit a deserving player from this discourse? Is my analysis flawed? Let me know your thoughts and whether you think one of our "big three" is destined for All-Star weekend in Houston.