Marcin Gortat laid it all out there to a Polish reporter last Friday night. Was he right?

Phoenix Suns C Marcin Gortat said a lot of things the other day, while Alvin Gentry responded by saying he was glad he did before going to say that nothing was going to change.

Players and coaches alike get frustrated when a team is going through a losing streak, and it's quite easy to spout off immediately after one of those losses. So I'm not going to put a lot of stock in this craziness as anything bigger than a way to kill a couple days till the next game.

But before this blow over completely (or blow's up), let's break down exactly what Marcin said and CHECK THE FACTS.

MG: ...when the ball sticks to one person on offence, it's hard to find a good rhythm.

Is the ball sticking to one person more than last season, or is the ball just not going to Marcin as much? Or maybe a little of both? 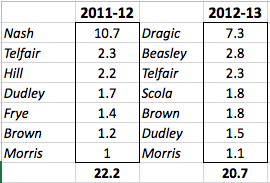 The top ballhandler (Nash vs. Dragic) has 3.4 fewer assists per game, and the team as a whole is down 1.5 assists per game. Yet, it appears from these raw numbers that more players and passing this year than last in every case beyond the starting point guard.

Was he talking about Michael Beasley? Beasley's usage rate is high (25.3) and his shot attempts per game are high as well (14.8), but his assist rate is double his career average so at least he is trying a little bit.

Or was he talking about Goran Dragic, who we all know is more interested in scoring than his predecessor? Dragic's usage rate is 21.9, nearly identical to his entire career AND lower than Nash's, while his assist rate is at a career high.

I don't really know, other than that Marcin Gortat is no longer the number one scoring option on the Suns when he takes the floor. And when you're being relatively ignored, you feel the ball is "sticking" because it's not coming down low.

MG: [Gentry] also said he wanted me to set up in the paint and wait for my shots. And I'm still waiting...

Across the board, his numbers are down as you can see in the chart above. Fewer attempts, lower shooting percentage, higher rate of getting his shot blocked and fewer easy finishes.

Why are all his numbers down, when a higher percentage of them are being taken from the inside (ie. less than 10 feet away from the basket) where shooting percentages generally rise?

A look at mysynergysports.com statistics tells some of the story. As we expected, Marcin's game was going to evolve with a new point guard. Dragic attacks off the pick more often than Nash, rather than floating and setting up the roll man.

MG: I can score in various situations. Finishing pick and rolls, in transition, from midrange, around the rim. There are a lot of options. Unfortunately, my two strongest plays - the pick and roll and post-ups have been taken away from me.

Gortat's most frequent play type last season was being the roll man. He finished on the roll 33% of the time last season, with a robust 1.234 points-per-play. He scored 63.4% of the time. This year, he rolls only 22% of the time as is terrible at finishing (.78 PPP, scoring only 42% of the time). Quite the change. Likely, the problem is where he's getting the ball on the roll, and how little spacing there is on the court. Tighter spaces means narrow driving lanes and easy help defense.

Let's talk post-ups, Marcin's second-best play type. Last year, he posted up 18.3% of the time but scored only 38.8% of the time. Ugh. Maybe he got better over the summer, right? This season, he is posting up slightly more often (18.9% of the time) and scoring slightly better at 41.9% of the time, but that's still not really that good.

As Alvin Gentry puts it: "We'd love to be able to throw him the ball and have him post up and score for us (but) that hasn't been one of his strengths really."

MG: We don't share the ball as much as we have in previous seasons. The ball doesn't move around the perimeter - it usually stops after one or two passes. You can't play like this, let alone win. Basketball is a team sport. Nobody ever won a game alone.

It is definiteiy true that the Suns are not as effective on offense this season compared to last. We all saw the missed shots and the shot-jacking all over the court.

Let's compare the teams side by side.

The Suns, as a team, are shooting more from the inside this year mostly thanks to great offensive rebounding. They are taking seven more shots per game this season but making only 43% of them. Total field goals per game are up while the assist rate is down.

Marcin is right that the ball is "sticking" more than last year. The Suns are 25th in the league in assist ratio on all field goal attempts (including misses), down from 8th a year ago. It's important to note the difference between the best and the worst in the league is quite small though, and the Suns' number is negatively affected by their plethora of missed shots.

So then Marcin is right?

Yes and no. Yes, the Suns are not focusing on him as much as last year, and the Suns are not as effective offensively as a year ago (19th vs. 9th). But Marcin has not proven he is a good one-on-one offensive player, such as the post-up and the spot up.

How will this end for the Suns?

Probably not very soon, unless the Suns are bowled over by an offer to trade. Gortat is a very good rebounder, defender and shot-blocker and those guys do not grow on trees. There are not 30 Marcin Gortats in this league.

Marcin Gortat needs to focus on his other strengths, just as Alvin Gentry wants it:

MG: We've talked before the season started. He said he expects me to play defence, rebound, block shots and quarterback the defence.

Just do that, Marcin.

...and remember to play our Guess the Suns Starting Lineup contest!

Marcin Gortat not happy with Suns, expresses self to Polish media