The Suns start a six game road trip against the Sixers in the City of Brotherly Love, but, let's face it, that's a little bit like calling Phoenix the City of Perpetual Rain. Don't expect any love on the court in Philly Sunday afternoon, as Alvin Gentry seems to have found some players who are hungry (and I don't mean cheesesteaks).

First meeting this season. The teams last played December 28, 2011 with Philadelphia winning in Phoenix 103-83 (in a game that's sure to have no bearing on today's contest).

Philadelphia is coming off of two straight losses, including a 116-109 OT loss to the Oklahoma City Thunder last night. Philadelphia's best player in the early season is Jrue Holiday, who leads the team in scoring at 17.5 ppg and assists at 8.9 apg. The Sixers are still indefinitely without their uber talented offseason acquisition, center Andrew Bynum, whose regulated activities now include bowling, walking, sitting and breathing. It's starting to appear that Bynum may never suit up for an actual game for the 76ers due to ongoing injury concerns. Check out this article on Liberty Ballers for the latest.

The Sixers play grind it out, slow it down, defense wins basketball. In Philadelphia basketball is not an artform, but a travesty that resembles a barroom brawl. The problem with their style of basketball is that while they excel on the defensive end they are equally inept on the offensive side. They do have some guys that can stroke it from deep, so don't be surprised if they try to exploit the Suns league worst 3PFG% allowed (.426).

For those of you who aren't familiar with the storied tradition of 76ers basketball, allow me to give you a quick tutorial: They traded us Charles Barkley. That is all.

Best things to come out of Philadelphia: Markieff Morris and cheesesteaks.

The Phoenix Suns are this close to looking like a real basketball team. Despite being 4th in the Pacific Division, they are only one game out of 5th place in the Western Conference. In a departure from most of last season, where the starting units (and those including Nash) carried the team, this year the bench has been their salvation. To illustrate this point, PJ Tucker and Sebastian Telfair have the best +/- numbers on the team.

While the Suns have managed four exhilarating comebacks from double digit deficits, all of those have been at home. The Suns lone road win (1-4) saw the opposite dynamic in effect as they nearly squandered an 80-65 lead and allowed the Charlotte Bobcats to close to 100-97 before Shannon Brown exploded for six fourth quarter threes. If the Suns plan on winning against Philly they will need a different game plan.

Unlike Philly, the Suns push the pace and score at an above average clip. Unfortunately the Suns are basically the worst defensive team in the league. Creating extra possessions only helps if you can score/defend at a better rate than your opponent. So far the Suns can't.

Goran Dragic (16.5 PPG, 7.4 APG) has been the Suns best, most consistent player this season, but don't be surprised if all four other starters to begin the season find their way to the bench if their indolent play continues (two down, two to go).

Markieff Morris/PJ Tucker: These two have arguably (I'm conceding it to them) been the Suns two best players the last two games. If they continue their stellar play, the Suns should have a chance in this game. The entire bench has been outplaying the starters, to the point of early season lineup changes. Is the bench mob back? Young players and bench players traditionally have the biggest disparity between home and road performance. Watch to see if the hostile performance causes any dip in their output.

Pace: The Suns like to play frenetically and the Sixers prefer a plodding, methodical approach. OKC had some success controlling the pace against them last night until Philly stymied the Thunder into 13 fourth quarter points. If the Suns can score 100+, they will probably win. If they are below that mark, you get the idea.

Fresh Legs: The Suns are coming in rested and Gentry has found (some) players on the team that are willing to hustle like madmen. The Sixers are coming off an overtime loss to OKC last night. Advantage: Suns.

Despite all my bluster and bravado, I think the Sixers have the upper hand in this game. Even if we assert the teams are nearly equal (lots of people would still dissent on this), the Sixers have the trump card of playing at home. It would be an impressive, though not startling, road victory and a great way to start a road trip that could turn ugly if the Suns don't win a couple early.

But that still doesn't mean we're not coming for you, Philly... and your cheesesteaks, too. 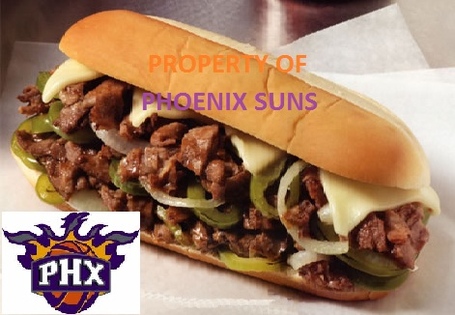