Anatomy of a run, how the Suns pulled away from the Cavs

We hear it all the time. Basketball is a game of runs. It's more true in some games than in others, but Tuesday's win over the Cavaliers was a classic example. Here's a breakdown of how the Suns pulled away late in the third quarter.

Share All sharing options for: Anatomy of a run, how the Suns pulled away from the Cavs

Here's the scene. The game was tied 59-59 with 2:55 to go in the third quarter. The Suns then went on a 12-0 run to end the period and never looked back. I went back and watched the stretch of play a few times and is often the case, some things that weren't apparent while watching live stood out.

It's worth noting that Waiters was on the bench. While he didn't shoot the ball very well (7-20) he did have seven assists on the game and ALL of them came during the 9:52 he played during the third quarter. Five of those seven assists were to Varejao on pick and pops.

When Waiters left the game, the Cavs offense fell apart completely. Pargo was ineffective in all aspects of play. He went 0-2 and had a horrible pass. The missed shots and turnover allowed the Suns to score half of those 12 points in transition. C.J. Miles contributed his own three bricks to the cause. And while the Suns (Scola) did a better job staying with Varejao, the Cavs had no one on the floor who could break down his man and draw help. In other words, with Kyrie Irving and Dion Waiters on the bench, Cleveland was hopeless on offense and the Suns pounced.

You can read the play-by-play of how the Suns scored during that stretch here.

As stated, six of the 12 points came in transition. The other six were as follows:

- Side pick and pop with Dragic and Scola. The Suns ran the same play in their previous half court set and Scola missed. This time, he was money from his money spot. 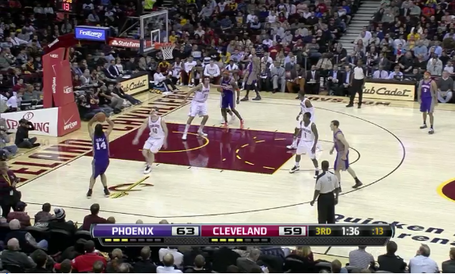 - High pick and roll with Dragic and O'Neal. The Cavs rotated to cover J.O. which left Dudley open at the high arc. The defender closed hard and Jared did his little escape dribble thing and penetrated into the lane which drew another defender. Dudley dished off to O'Neal for an open shot. This was classic read and react, pick and roll basketball. Beautiful. 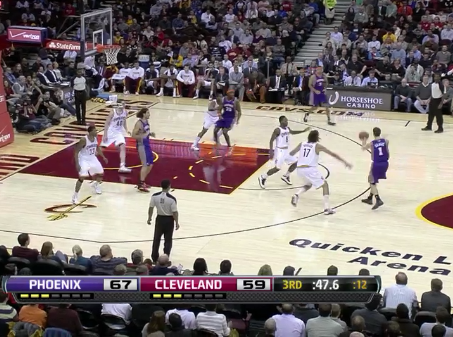 - High pick and roll with Dragic and O'Neal. Goran reads the defender cheating over to hedge the screen so he craftily "denies" the screen and drives the lane. Scola's man has to help to stop the ball and Dragic delivers a sweet little pass in traffic to Luis who catches and finishes at the front of the rim. Another very nicely executed play that's mostly just letting your best player do smart things with the ball. 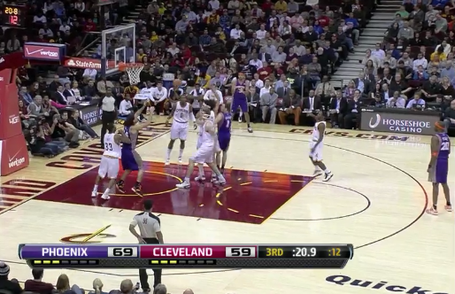 As you might imagine with a 12-0 run it was a combination of factors that led to the stops and makes. Most impressive to me where the three buckets in the half court although all three transition finishes were nice as well.

The Suns also went on a big fourth quarter run to put the game to bed and they did that with an entirely different style of play -- a low post, inside/out game. This kind of offensive versatility is very encouraging.