The Phoenix Suns are not the most talented team in the NBA, but they do have a collective heart and hustle that will help them win ugly games when their shots are not falling.

Suns fans ask me what's to like about this team. There's no bankable superstar, no rim-rattling dunks, no symphony of offensive genius. The old days of 'free tacos' for scoring more than 99 points will be few and far between.

Retail outlets don't know whose jersey will sell this season and they have not yet put in any orders. There's a minimum quota (just under 200 at a time) that not one player's name is guaranteed to sell out this season.

The arena was disappointingly empty at the start of the game. That's not a sea of purple jerseys, my friends. Those dark spots are not dark T-shirts. 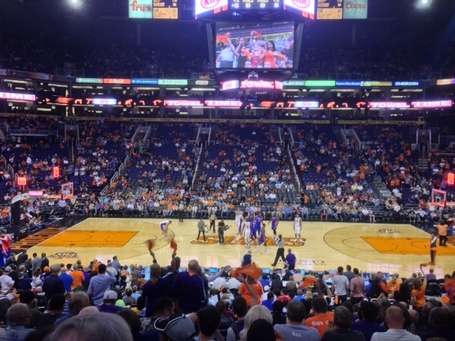 Yet, I find myself liking this Suns team a lot better than the version that took the court the last couple of seasons. And that "empty" stadium agrees with me. I heard more cheering as the game went on than I heard most of last season.

This team has a collective hustle and scrappiness, from the starting unit all the way down to the last guy (with only one minor exception). And according to Luis Scola, that has to be their rubber stamp all season long.

"There's only one way to win games and that's playing focused for forty-eight minutes and play hard and hustle and do all the little things," he said after a game in which he led a second quarter effort that turned an 11-point deficit into an 8-point halftime lead.

Scola previously played five seasons as starting power forward with the Houston Rockets, never suffering a losing season once he became their best player. He also played a starring role on his Argentina National Team for the last 32 seasons (or so). He knows how to win games.

In two games with the Suns, Scola is averaging 14 points and 10 rebounds and setting a great example for his teammates with hustle play after hustle play. Deride the man all you want for his lack of vertical, but don't disparage his ability to lead a team to victory.

Scola was the first starter to return in the second quarter when the Suns were down big again and made his own stamp on the game. In the final 7:29 of the quarter, Scola had 11 points, 2 rebounds and a steal, keying a 17-point turnaround from 9 points down to 8 points up. Tayshawn Prince knew what happened.

"I think for us, the second quarter was the difference," he said. "I think that was the most disturbing part (being down 8 at halftime) because we played so well early."

But even with Scola's impact on the second quarter, it got dicey again in the fourth. This time, Shannon Brown turned around a forgettable early game with a sizzling 10-point fourth quarter on an array of drives and contested jump shots.. Alvin Gentry is a man of his word - he who played well, plays a lot. Brown played all 12 minutes of the period.

Brown got it going with a couple of sweet, crowd-raising drives to the hoop - a mantra that Gentry says will make a difference to the team this season. He says they need an inside presence, but that doesn't mean just the big guys. The guards and wings have to get to the hoop as well.

Michael Beasley had his best regular season game (of two) with the Suns. Like Brown, he got it going with drives to the hoop. He was positively Melo-like with double putback attempts on a missed initial drive in the first half. In all, he finished with 16 points and 7 rebounds and was periodically tenacious. His ability to finish at the rim with either hand is impressive, and brought the crowd to their feet a few times.

The Dragon and the Hammer

The Suns two best all-around players in this game were Goran Dragic and Marcin Gortat, who each finished with a double-double. Dragic was the best player on the entire court all night with 15 points on 10 shots, along with 10 assists that could have been 13-15 assists if open shots would have fallen. Gortat sucked up rebounds (16), blocked shots (3) and ran a nice pick-and-roll with Dragic on top of his own post moves (16 points on 7-13 shooting).

But the key to their games was their defense. Dragic worked over the Pistons point guards, and Gortat held Monroe to 5-17 shooting on shots mostly inside the paint.

This was the 9th time in the last 10 opportunities to win game two after losing game one. The Suns have been 1-1 26 times in 45 seasons.

The Suns were on track to hold their first two opponents under 40% shooting for the first time in 30 years, until the Pistons mounted a late rally. For the game, the Pistons finished with a 41.1% shooting.

Now the Suns head out to a 3-game roadie against Orlando (best player is JJ Reddick), Miami (LeBron) and Charlotte (?).