Alvin Gentry's continued use of five-man bench line-ups has been a topic of much debate and criticism on this blog, and rightly so as those units' performance has been, for the most part, sub-par.

Share All sharing options for: Suns Versus Detroit: Rotation Analysis

To get a better look at how much the Suns rolled out these line-ups and to gauge their effectiveness, I turned to popcornmachine.net, which tracks the performance of each line-up used in a game and charts them in handy-dandy color-coded charts, like the one you see below. 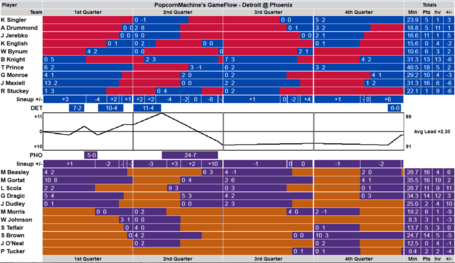 Let's start right away by taking a look at the all-bench units used by both teams.

The Suns chose to send out all reserve line-ups twice: at the beginning of the second and fourth quarters. Between those two stints, the second unit was out there for a total of 10:33 and was outscored by four.

In comparison, the Pistons only used an all-bench line-up once: for the first 1:30 of the second quarter, during which they out-scored the Suns' second unit by two points.

So it certainly was true that Gentry made use of an all-reserve line-up much more than his Detroit counterpart did. And while the Suns weren't totally crushed over the course of the game, they were definitely out-played during this time. As you can expect if you watched the game, the bench unit did worse in its second quarter stint (-3) than it did in the 4th quarter (-1) after the players settled down a bit.

The starting five is clearly the strength of this team, but exactly how strong is it?

The Suns sent out the entire starting five on three separate occasions.

The first is obviously the beginning of the game, and the whole group played for the first 6:57 before Scola took a seat. During that time, the Suns were +1.

The starting five was reunited at the 2:53 mark of the second quarter, an in essence played the duration of the period (Morris and Johnson came in for the final five seconds or so), and during that time the Suns reasserted control and outscored the Pistons by 10.

The starters opened the third quarter together, and played until the 3:32 mark, a total of 8:28 and their longest stretch together. During that time, the Suns were outscored by 1.

In total, the starting five played 18:13 together and were +10, although basically all 10 of those came during the nearly 3 minute stretch late in the first half. For the rest of their 15 minutes together, the Suns played the Pistons to a draw.

If you look at those times, all of the Pistons' starting five minutes minus the short stretch in the second quarter (where they were even anyway) came head-to-head against the Suns' starting five, and the Pistons came out on top outscoring the Suns by four.

Where the Suns starters really did their damage is when at least one of the Pistons' starters took a seat and a bench player came in. Against Detroit line-ups including at least one reserve, the Suns' starting five was +14 in 4:59. The Suns +10 stretch at the end of the half came against four pistons starters plus rookie shooting guard Kim English.

So as far as starting fives go, the Suns aren't all that dominant. Where their advantage came, at least in this game, was playing their starters together longer and taking advantage when the other team put in a bench player or two. PHX 1-5 > DET 1-2+4-6

There were a couple different significant runs made during this game: a few smaller ones by Detroit and one big one by the Suns.

Detroit went on a 7-4 run early against the Suns' starting five, then went on a 10-4 run later in the period when Markieff Morris stepped into the line-up in place of Luis Scola. Thanks to these runs, the Pistons held a 28-24 lead at the end of the first quarter. The Piston went on another min-run to start the second quarter, out-scoring the Suns second unit 11-4. The Piston also went on a 6-0 run in the closing moments, but the Suns were able to hold on for the victory.

A big reason why the Suns were able to hold on came later in the quarter as Phoenix responded with a huge 24-7 run, starting with the last 30 or so seconds of the bench five, continuing with a line-up consisting of Scola and four bench players and finishing up with the starting five.

Alvin Gentry has a difficult dilemma on his hands. The first unit is mostly good, while the second unit is mostly bad. The first five versus second five disparity isn't quite as bad as most think, but it is there. So what should Gentry do? At least in this game, the Suns had an advantage by keeping their starting five in longer and allowing them to play a couple minutes against a line-up including Detroit reserves. Should Gentry sacrifice that advantage to sit a starter or two early in order to bring them back earlier to bolster the bench? Or would that make the starting five worse just as much as doing so would make the bench better? Would that plan be a net positive, negative or no change?

**Note - For whatever reason, popcornmachine.net doesn't have the numbers from the game with GSW up on their site, so I don't know how much changed from game one to game two. However, they do have the numbers up from the ORL game, and a quick glance tells me there was some change. This particular post was getting a little long, so to spare you from a wall of text I'm publishing it as is. I will examine the ORL game soon, and maybe the MIA game as well, to see what changes Gentry has made. But this game against Detroit can be considered the starting point of Gentry's experimentation.