Suns go dark with All Black Everything (retro uniforms)

There's been a lot of talk about the Suns adding in a black-themed uniform to match their new orange and black (no purple) court. We are going to get a taste of that this season via the retro look for 10 games.

Share All sharing options for: Suns go dark with All Black Everything (retro uniforms)

Some people loved them. Some hated them. Now that debate will be reignited as the Phoenix Suns announced Wednesday that the team will wear the all black retro uniforms from mid to late 90's for ten games this season.

SUNS GOING RETRO WITH BLACK UNIFORMS | THE OFFICIAL SITE OF THE PHOENIX SUNS
One of seven NBA teams chosen to go retro for select games this season, the Suns chose the popular jerseys with the large, bright sunburst across the chest that were worn for occasional road games from 1994-2000.

Here's a link to a photo gallery on Suns.com showing some more pics of the players wearing black.

The dates for the retro uniforms include seven home games and three on the road:

I've seen fans over the years ask for this. Now it's happening and I'm guessing the reaction will be mixed. Let's vote and find out! 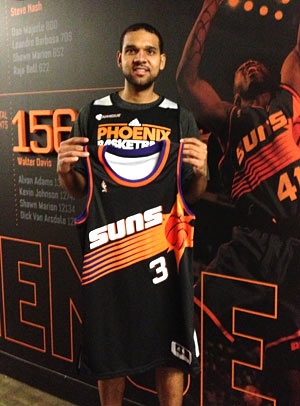