Tonight we find out if the Suns have learned any lessons about consistent effort. This is their first foray into a potential 3-game winning streak at home against an opponent lower in the standings.

Can the Phoenix Suns make it three games in a row?

Well, if there was ever a great opportunity then this is it. Sacramento just lost last night by a boatload to Denver and may not have a fully-healthy Tyreke Evans at their disposal.

Also, the Kings are 1-9 on the road this season, while the Suns are a robust 7-5 at home. Somehow, there's a team in NBA worse on the road than our beloved Suns. Imagine that.

But we cannot take this team lightly, per Alvin Gentry via Paul Coro.

"We don't have the ability or anything else not to approach the game with urgency," Suns coach Alvin Gentry said. "This is a very talented team. Although their record doesn't indicate that, they're a young team and they're very talented on the inside.

"Isaiah Thomas and Aaron Brooks create problems on the perimeter. They've had really good games against really good teams and they've struggled against some teams. If they get hot, they can cause problems for you. So we have to approach it with the sense of urgency we have.

"I don't understand why we wouldn't have anything but a sense of urgency."

Speaking of the Suns, here are a few quick facts for those who don't follow me on twitter: 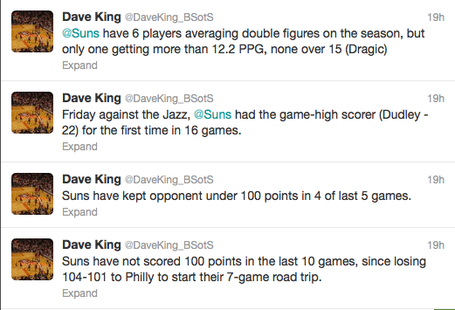 And now here's the stats for the Kings on the year.

DeMarcus Cousins has always played the Suns well, so it's up to Marcin Gortat and Jermaine O'Neal to hold him in check. Jason Thompson is once again failing to maximize his talents, but will probably play well against the Suns tonight since he always seems to.

Oh yeah, and then there's that Thomas Robinson dude. He's pretty good. It will be a battle with former teammate Markieff Morris on the second unit.

Tyreke Evans may not play (knee) and Marcus Thornton is on leave (personal).

(sorry for the short preview/thread today - we had a mixup on scheduling coverage. Oops!)